3D camera tracker and match mover for After Effects.

What is Camera tracker

Camera Tracker for After Effects®* lets you pull 3D motion tracks and matchmoves without having to leave After Effects. It analyses the source sequence and extracts the original camera's lens and motion parameters, allowing you to composite 2D or 3D elements correctly with reference to the camera used to film the shot.

This 3D motion tracking technology was previously only available in NukeX, Foundry's high-end film compositing tool. You can now do all this within Adobe® After Effects®.

*As of March 31, 2017, we discontinued Camera Tracker for After Effects. After this date we will end, sales, development and support.

Camera tracking directly inside After Effects

Unlike other tracking solutions, you do not have to leave your compositor of choice in order to pull a track with Camera Tracker. This does away with the usual problem of finding formats that round trip correctly.

Camera Tracker can be run fully automated, or you can use its incredibly in-depth configurable options to tweak everything from tracking and validation through to solving and object creation.

The unique in-viewer menu featured in Camera Tracker allows for quick and easy operation of the plug-in without having to move the cursor, and thus your point of attention, away from the image itself.

The in-viewer menu and associated keyboard shortcuts allow you to create After Effects solids and nulls within your comp, positioned to match your currently selected tracked feature points. Easily tie objects and text within the context of your scene.

Camera Tracker lets you configure a ground plane, thus setting the entire scene's orientation and offset via a variety of means that allow for rapid scene setup, allowing fine tooth control over the scene's offset and orientation, or manual tweaking.

Once a shot has been solved and a scene created, you can easily render a 3D feature preview, which details the positions of the individual feature points and their current selection and frame state. This unique feature can be used to visualize and assist in setting ground planes and creating objects.

Camera Tracker features a comprehensive solve stats and refinement workflow. Standard After Effects parameters are set showing a number of useful statistics, both after the track phase and after the solve phase.

Camera Tracker can estimate the lens distortion of the tracked clip for you, then provides the ability to both flatten and re-distort the plate. It will additionally refine an estimate you dial in, and it supports both spherical and asymmetric distortions.

Camera Tracker is able to work from either known focal length and film back shots, or to estimate this data for you using its high tech and production tested solve phase algorithms. Locked and varying focal lengths can be calculated, and a flexible 'refine' function allows you to explicitly define a rough estimate should you wish to lock to a particular range.

In addition to supporting standard moving camera shots, Camera Tracker's flexible track validate and solve stages can additionally be locked down to solve nodal pans (i.e. where camera body and lens is rotated around the nodal point of the combination).

All of your questions and answers on Camera tracker here. 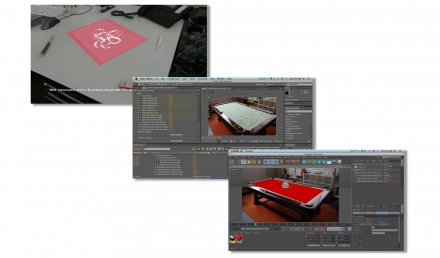 With the best support team around (or so our customers keep telling us), we're easy to contact and dedicated to delivering a quick response when you need a hand.