Remote work is more important than ever, that’s why we’ve introduced the first implementation of SyncReview in Nuke 12.2. Giving teams the ability to sync multiple sessions of Nuke Studio, Hiero and HieroPlayer together and allowing two or more users in multiple locations to review and annotate footage collaboratively. Whether connecting to a network storage, cloud storage like DropBox, or working with localized files, all participants have access to live playback and viewer controls, soft effect parameters and toggling between versions. Plus, push updates allow users to stay in sync with the session. The number of users and resolution is only limited by your hardware and bandwidth. 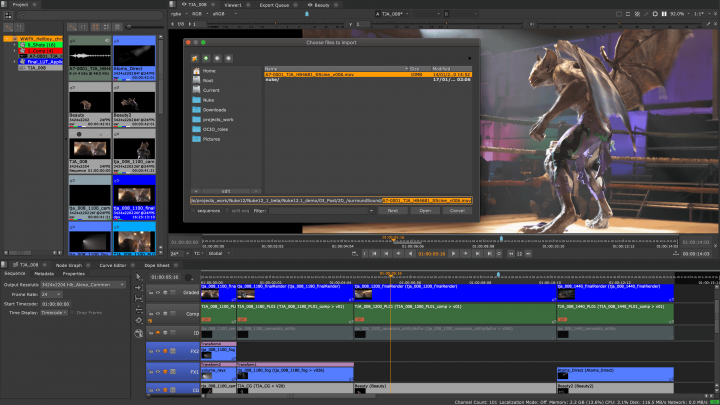 We’re expanding native support of .mov containers containing audio to Linux and Windows. You’ll now be able to import these directly into Nuke Studio, Hiero and HieroPlayer without the need to extract and import the audio as a separate WAV file.

Introducing multichannel audio support in Nuke Studio, Hiero and HieroPlayer. We’ve added multichannel audio patching to your timeline, so when you import 5.1 and 7.1, or individual audio files, and place them on your timeline, the audio tracks will now have the ability to patch to different output speakers (eg. LFE, Center, SR). The audio output can be set up using monitor out devices or specific audio cards.

A new behavior links source clip versions between a project bin item and its corresponding track items. Now, changing the version of a clip on the project bin, or on a sequence, will change all other instances of the same clip that exist in the same sequence or in any other sequences. This streamlines the process of updating sequences, for example when propagating changes across 10, 30, and 60-second cuts of a project. Version linking is set to ‘On’ by default and can be set manually in the timeline, project bin, and Preferences.

HieroPlayer as Flipbook in Nuke

Nuke 12.1 includes the ability to use HieroPlayer as a flipbook tool for Nuke and NukeX, giving artists more control when comparing different versions of their work. HieroPlayer will auto-detect the OCIO config and viewer colorspace coming from the Nuke script and set up the files being reviewed correctly, whether you are working on a single script or in multiple scripts at one given time. HieroPlayer can be set as the Flipbook in the UI and in the Preferences.

This release adds support for UI scaling when using high-resolution monitors on Windows and Linux. This brings all platforms inline (with high-resolution display support added for macOS in Nuke 12.0v1).

Building on the work to add support for DNxHR MXFs in Nuke 12.0, in this release Nuke now supports reading of DNxHR .movs and writing of DNxHR MXFs.

When reading .mov and .mxf ProRes files you can now use metadata to set colorspace in Nuke. You can also parse the frame header to get transfer characteristics if not found in file metadata of MXF or MOV files—this change will have an impact on scripts loaded from older versions of Nuke. Support for Motion JPEG B, encoded QuickTime, has been added to the mov64 Reader in Nuke and Nuke Studio and mov64 Writer in Nuke. This re-enables support for this codec on macOS Catalina and introduces support on Windows.