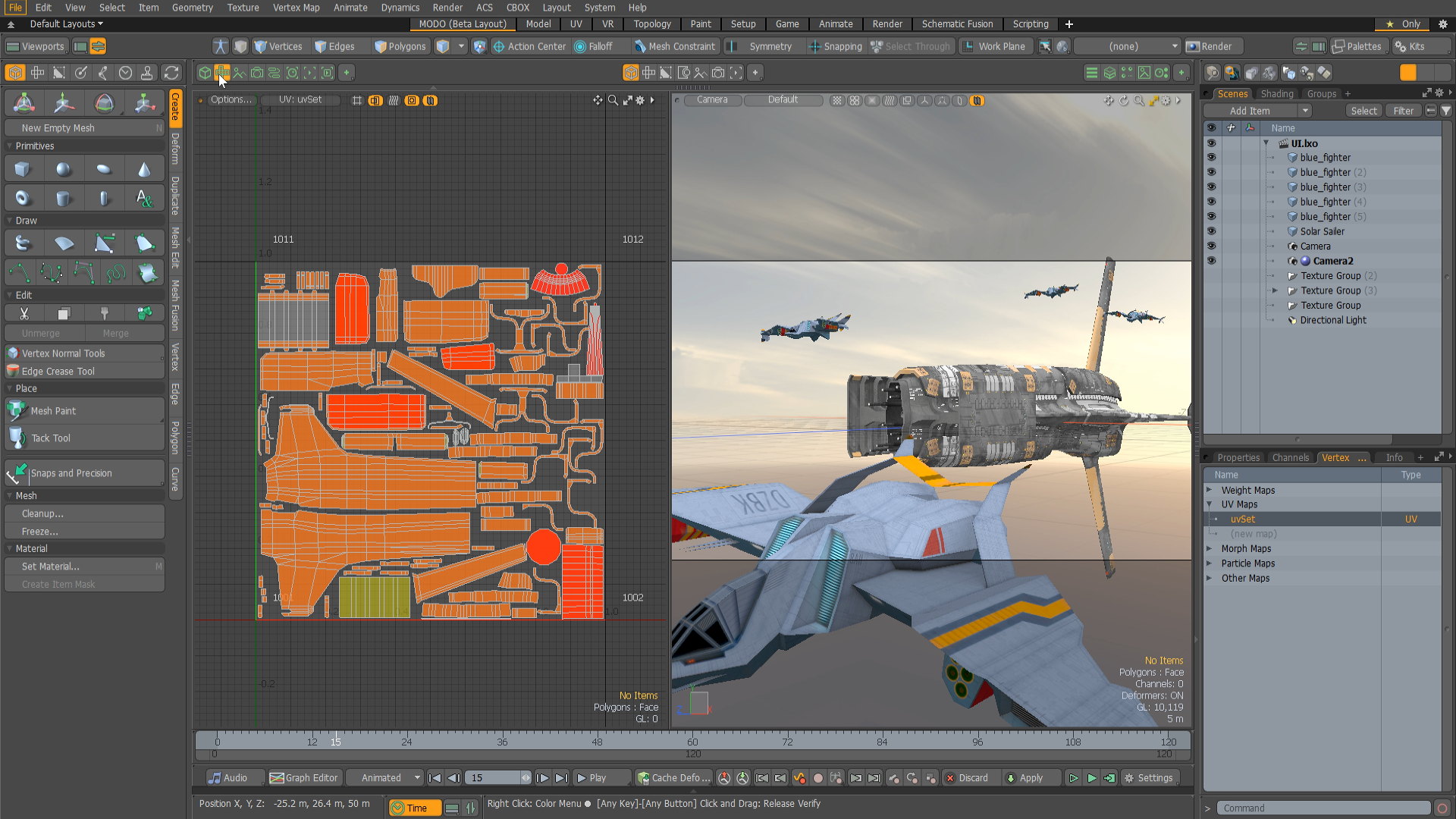 The new integrated VR viewport allows you to connect to a VR headset and view and adjust your model within a virtual environment. This release focuses on Item transformation, scene layout, and design review. A number of key Item editing tools are available, including move, rotate, scale, instance, duplicate and transform reset. There are also snapping options and action centres available, allowing you to accurately move objects around in your virtual environment. 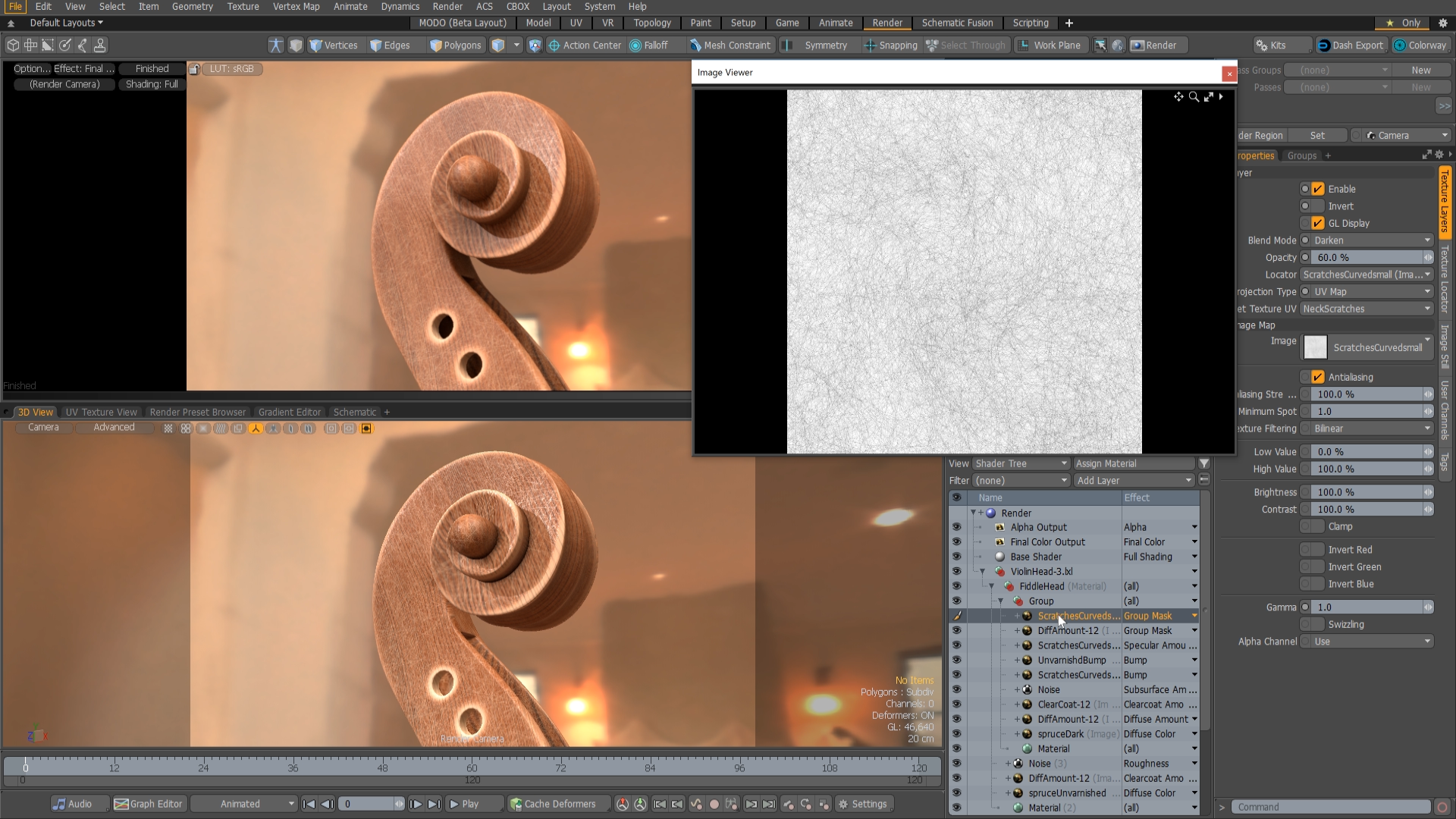 The Advanced Viewport has seen significant improvements, allowing you to render more complicated material setups directly in the viewport and make changes in real time. With Group Masks fully supported, you can mask multiple material layers and render highly complex, multi-layered material setups. There’s also full support for group blending modes and opacity changes, resulting in little difference between the representation of a material in AVP and in Modo’s native renderer. Other rendering improvements include the addition of a Film Roll channel, which allows you to animate a two dimensional roll of the camera relative to the camera’s film offset channels: useful in 2D animation pipelines. 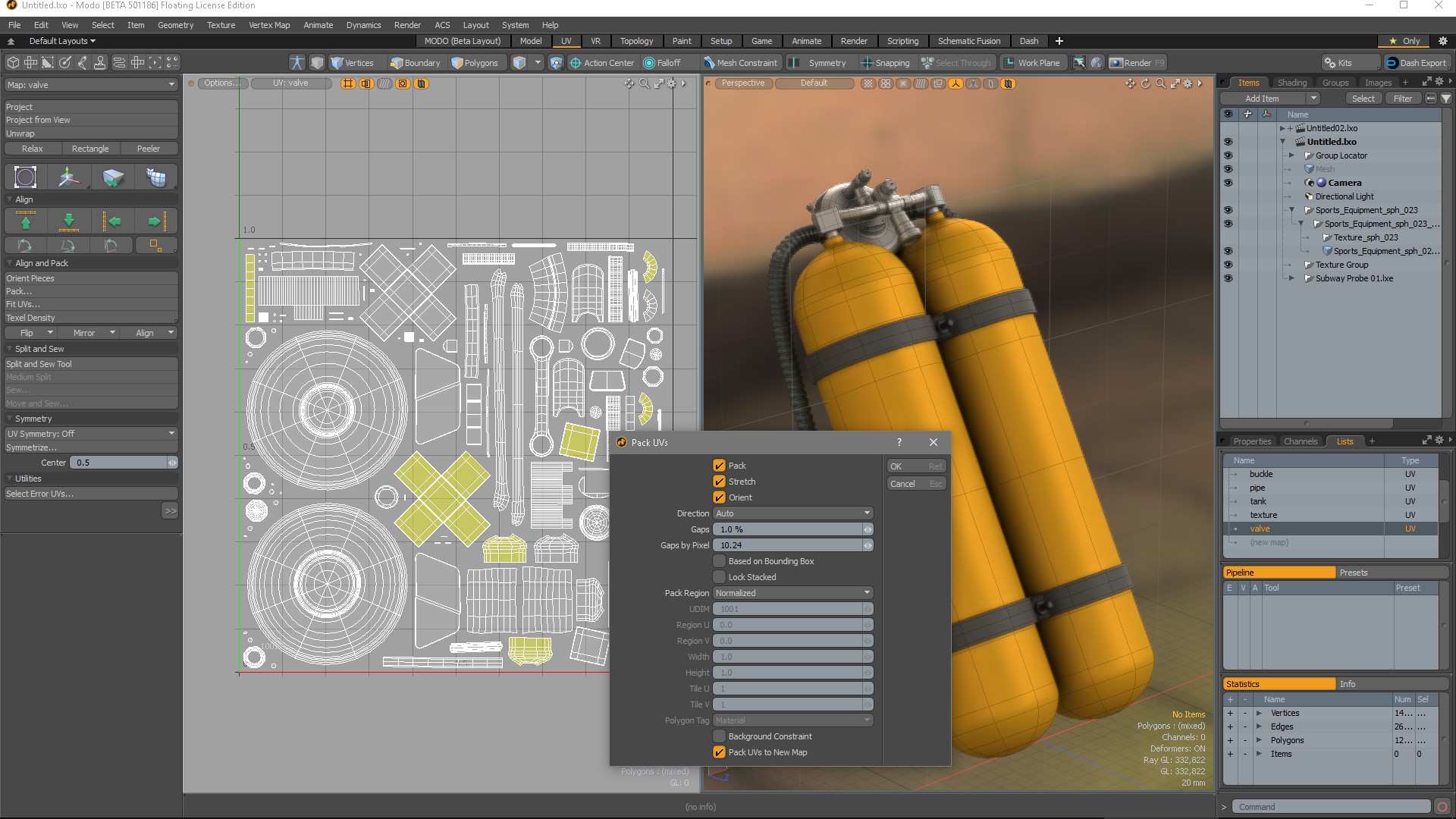 A major update to the UV Pack command brings a new algorithm that provides faster Packing times. The distance between UV islands and UV border can now be more accurately controlled with the Gaps by Pixel Option. There is a new option to Pack to a new UV map, preserving the original. And a further major addition is the ability to Pack based on Polygon Tag, which gives the ability to pack UVs to separate UDIMs based on that tag. Additional settings have been added to MeshFusion Surface Strips, giving you greater control over the generated topology. 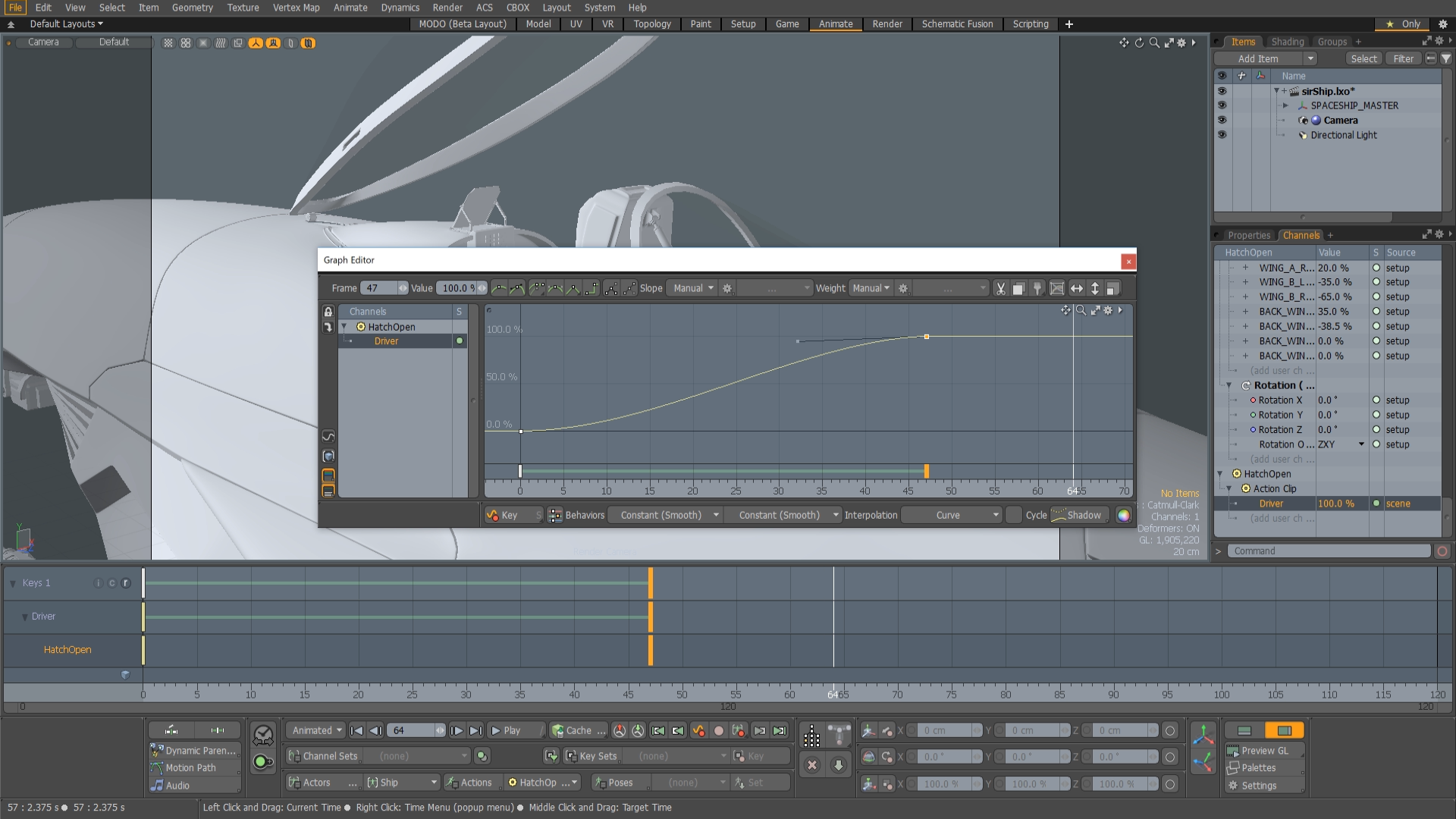 Modo 12.1 introduces animation workflow enhancements designed to speed up the keyframing process and reuse keyframe data. Driven Actions add the ability to reuse, retime and rig action clips in a scene, allowing you to fully utilise Actions for the first time. There’s a new default key slope type, providing smoother interpolation between keys, vastly reducing the amount of key adjustment required whilst animating. It’s now much easier to manipulate multiple keys in the Gradient Editor using the new Box Transform Tool. The Mini Gradient Editor brings a number of improvements including the addition of a menu that allows you to save and load presets. 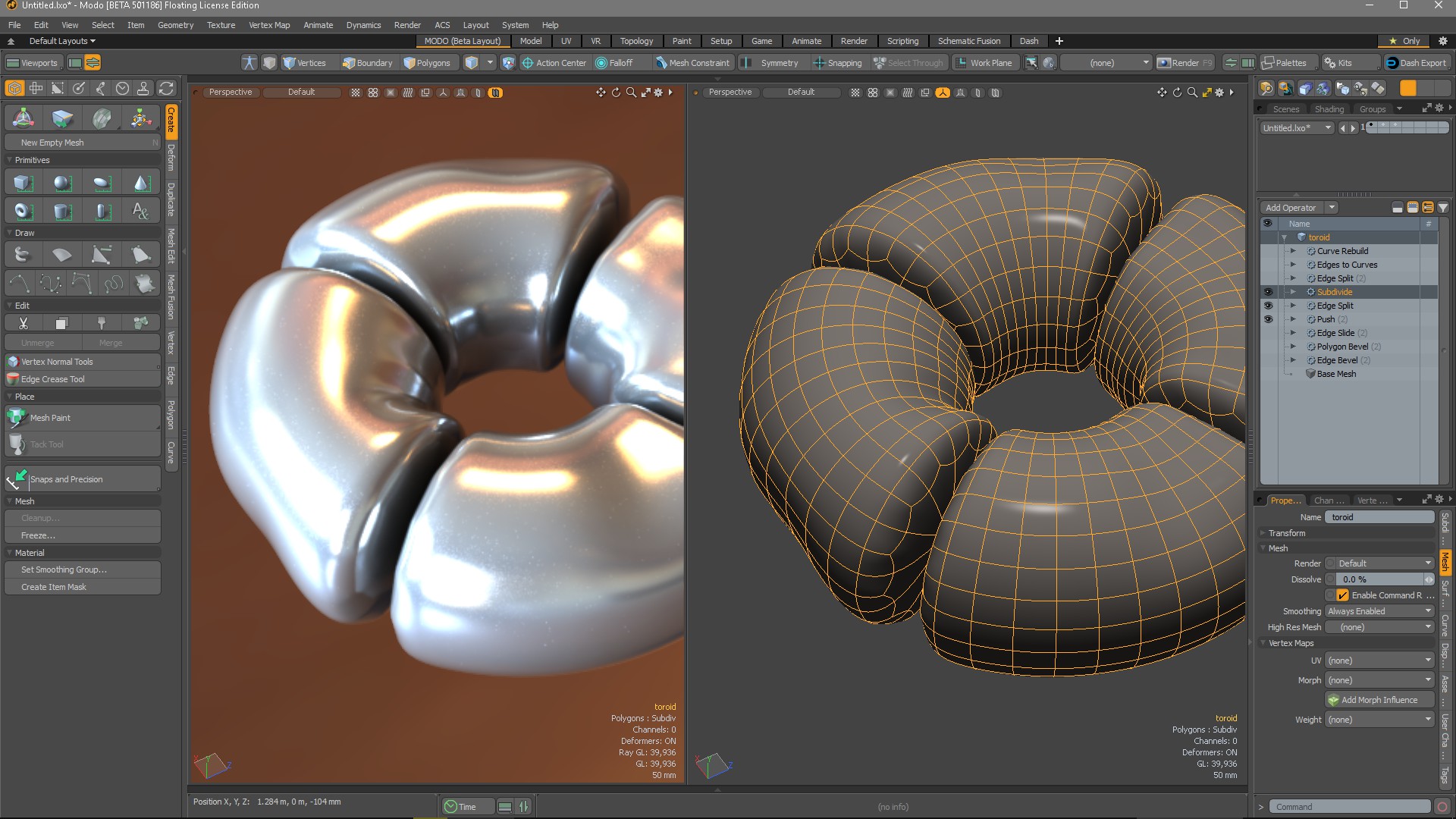 Modo’s procedural modelling system continues to improve, with a range of new Mesh and Selection Operations. The ‘Surface Constraint’ mesh operation is a procedural version of the Background Constraint, which allows you to procedurally constrain geometry to another piece of geometry in the scene. Other key additions include the Convert Selection, Select Connected, and Select Loop selection operators, and the Edge Slide, Push, Edge Split, Polygon Merge and Polygon Unify mesh operations. Watch our videos for a full run-through of all these new features! 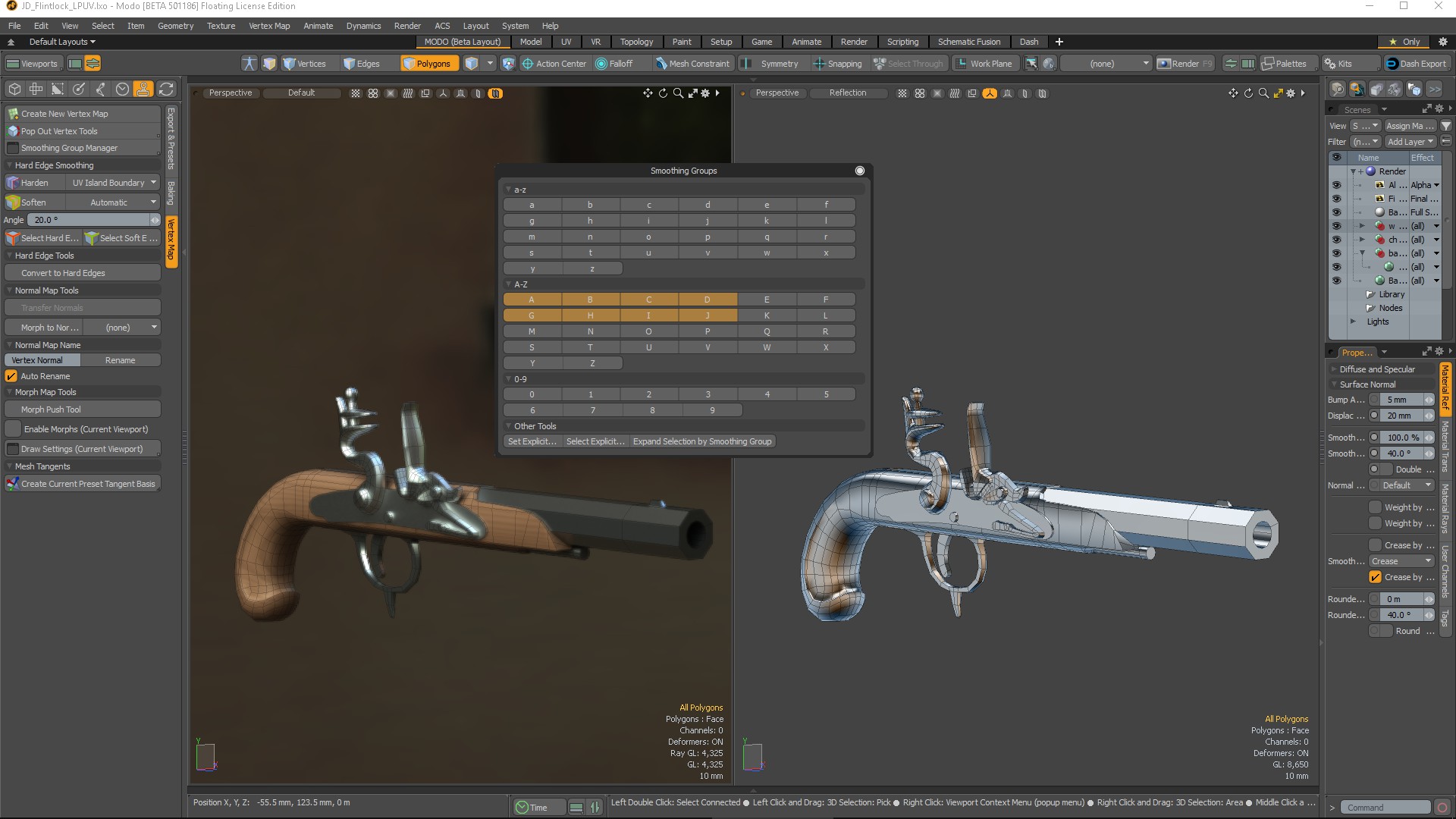 Modo 12.1 brings significant improvements in editing and defining vertex normals. The Vertex Normal Toolkit has been updated to make it simpler but with more options for hardening or softening by specific component, by endpoint, by angle, by polygon boundary, UV boundary, and UV island boundary. There’s a new Smoothing Group manager: a UI for defining and visualizing the groups within which polygons exist. The vertex normals of a model are stored as part of Modo’s native smoothing rather than a separate vertex map, so models can now be freely edited and deformed without adverse effects on smoothing. A variety of new options for controlling surface normals have been included as part of Material Properties. And there are options for controlling the effect of smoothing groups on a per material basis. 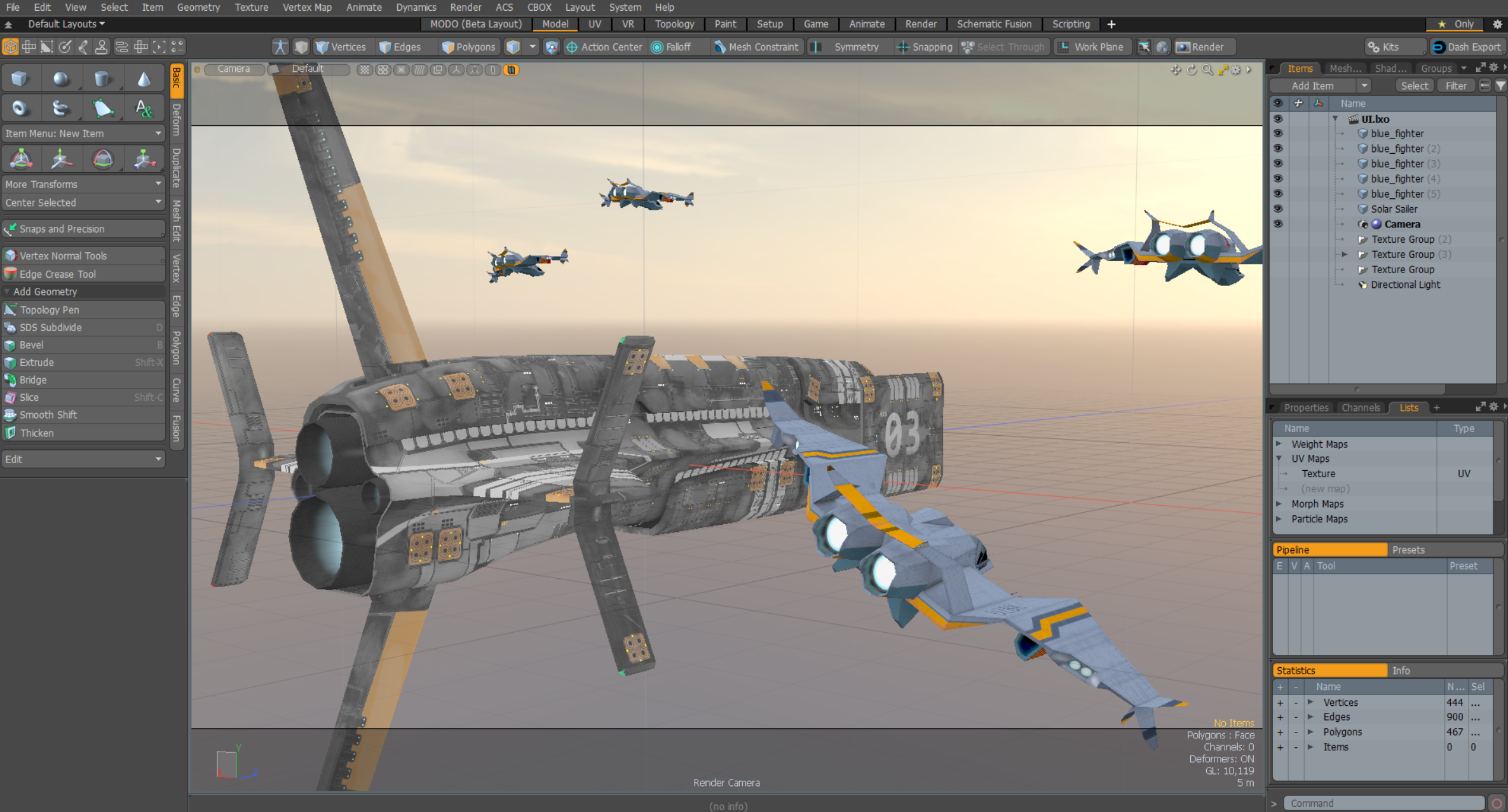 Modo’s UI has been tweaked: To allow faster access, the tool palette buttons can now swap the tool palettes directly in the form. It’s now possible to toggle things like background mesh visibility, item drawing, weight map visibility and distortion directly in the 3D viewport, making these options easier to find and giving a clear visual indicator of their state. The Modo modes form includes a set-up mode button, render button, and nested center and pivot mode buttons, allowing for further consistency between layouts. And all KITS now exist in a KITS popover form, accessed via the KITS button in the top right of the UI. Modo also comes with a new Beta layout, showcasing a number of new UI concepts for working in a single layout. 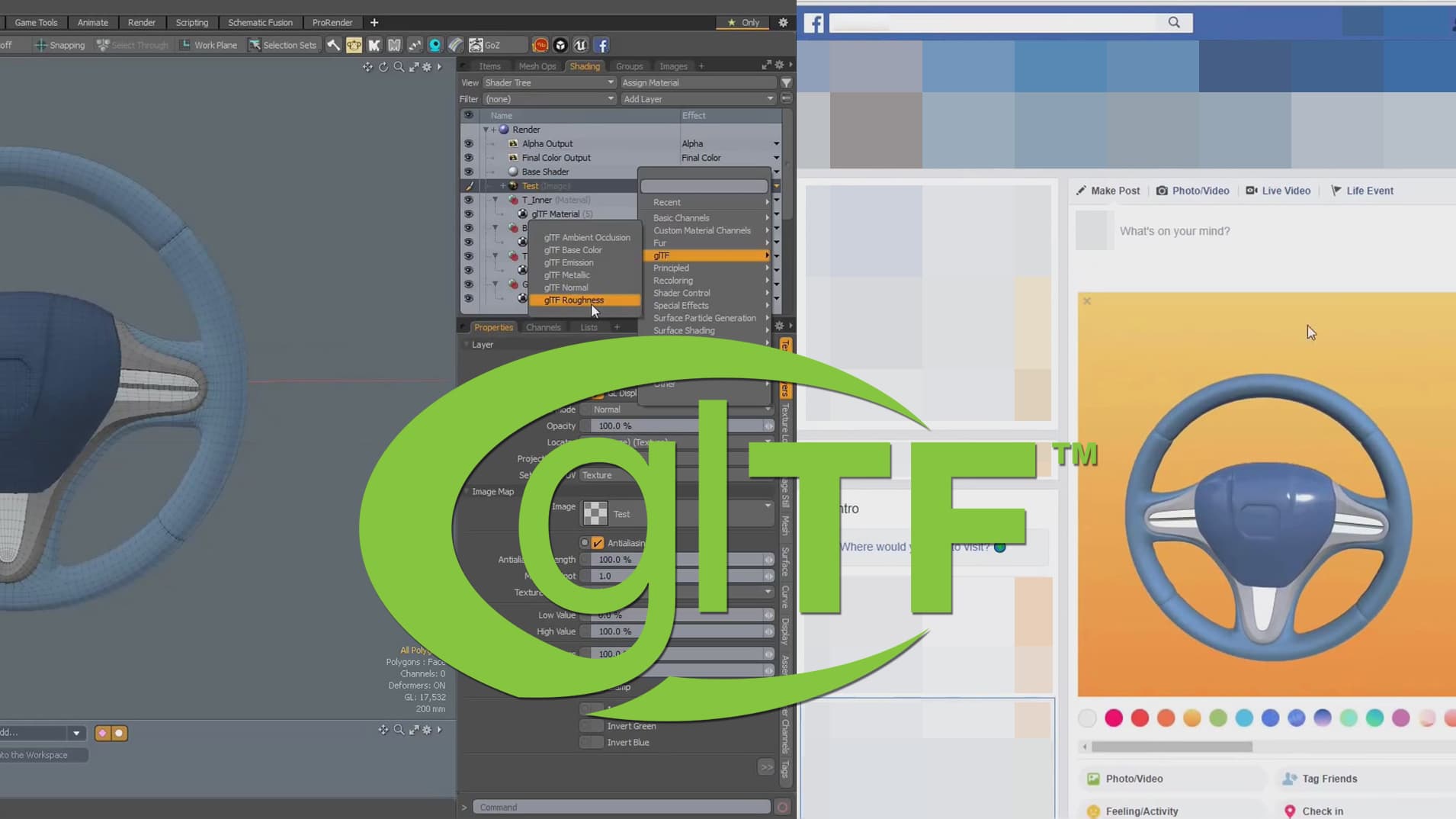 Developed in conjunction with Facebook's new ‘3D Posts’ functionality, artists can now create 3D objects in Modo and then share them on the Facebook News Feed. Facebook users can then grab, spin and interact with the objects to look at them from all angles. This technology presents artists with a unique opportunity to create more engaging and compelling content, whilst offering users the opportunity to enjoy interactive 3D experiences on Facebook. 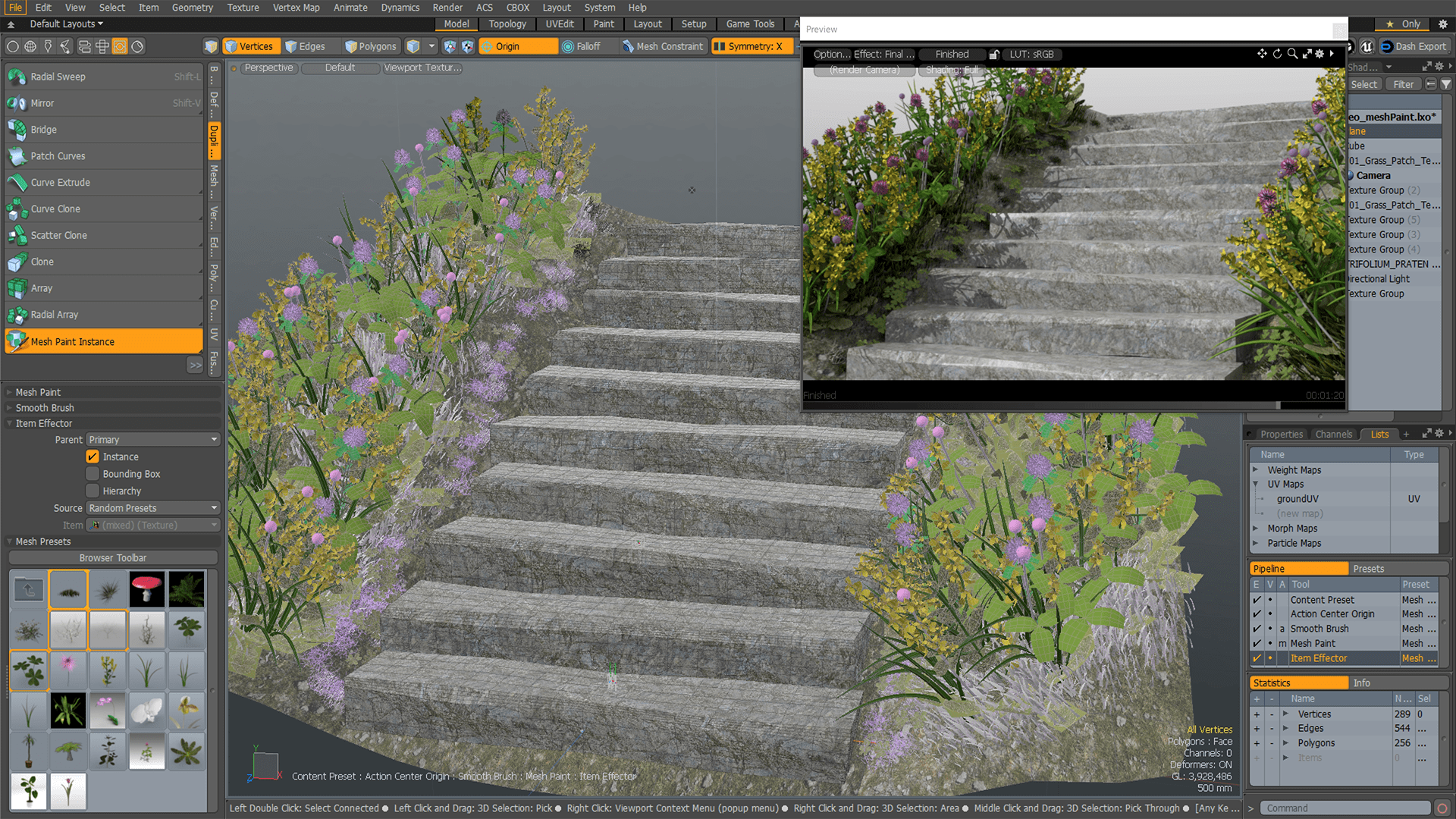 Modo's Mesh Paint tool has been brought up-to-date and enhanced, allowing you to quickly bash out models and environments faster than ever before. With the ability to now paint random presets, you can utilize asset libraries in new and exciting ways, and the new array paint modes give you greater control when painting more ordered collections of objects. 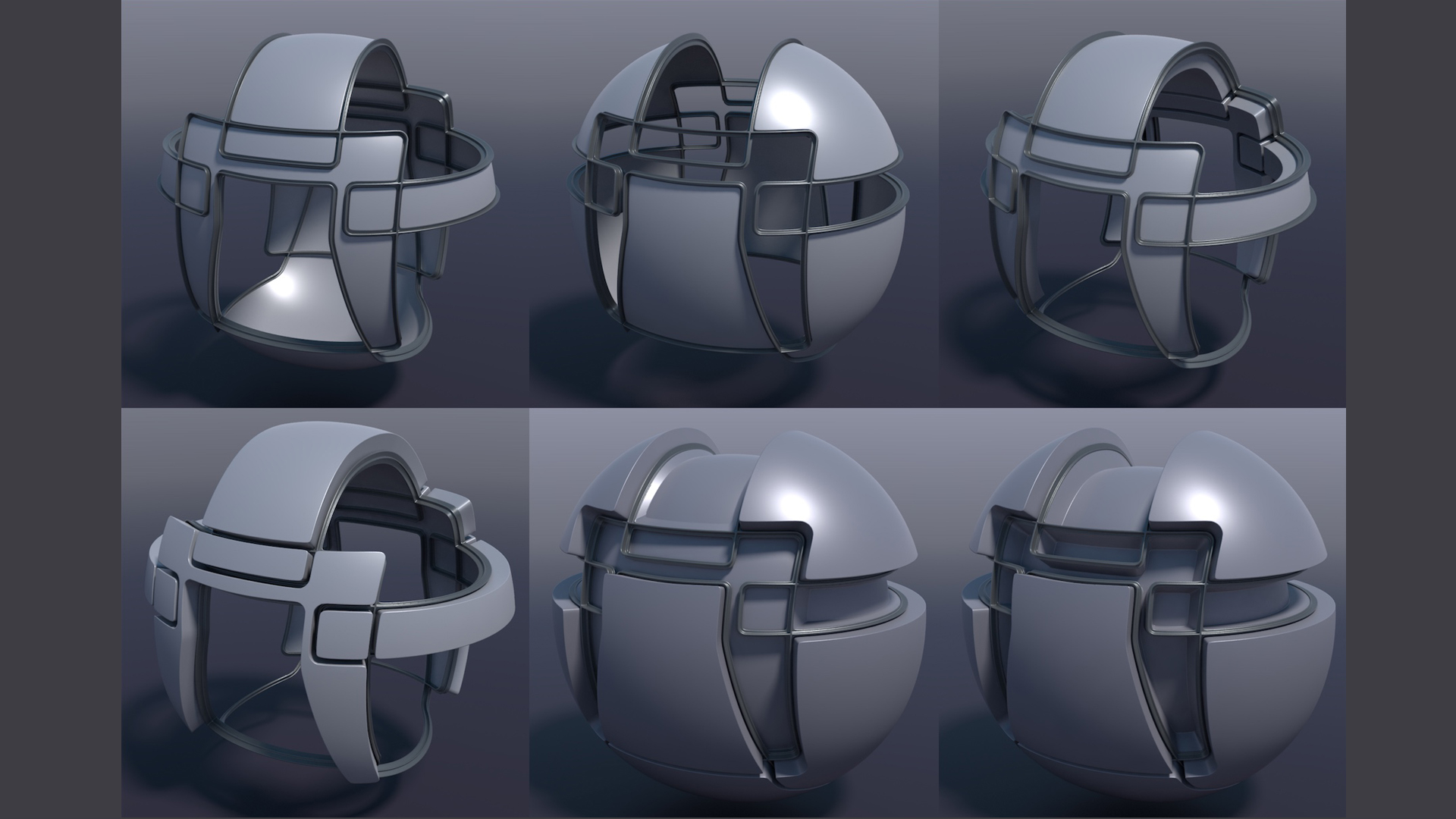 MeshFusion is significantly enhanced with Surface Strips, an innovative new feature that works by allowing the creation of strip geometry or topology that lies flush on any Fusion Item surface. This provides a wide range of opportunities for Post-Fusion modeling with either Procedural operations or direct modeling of the Fusion Output Mesh. The most obvious examples are channels and ridges along arbitrary paths — but the range of applications is much much wider, allowing artists to explore iterations more creatively than ever before. 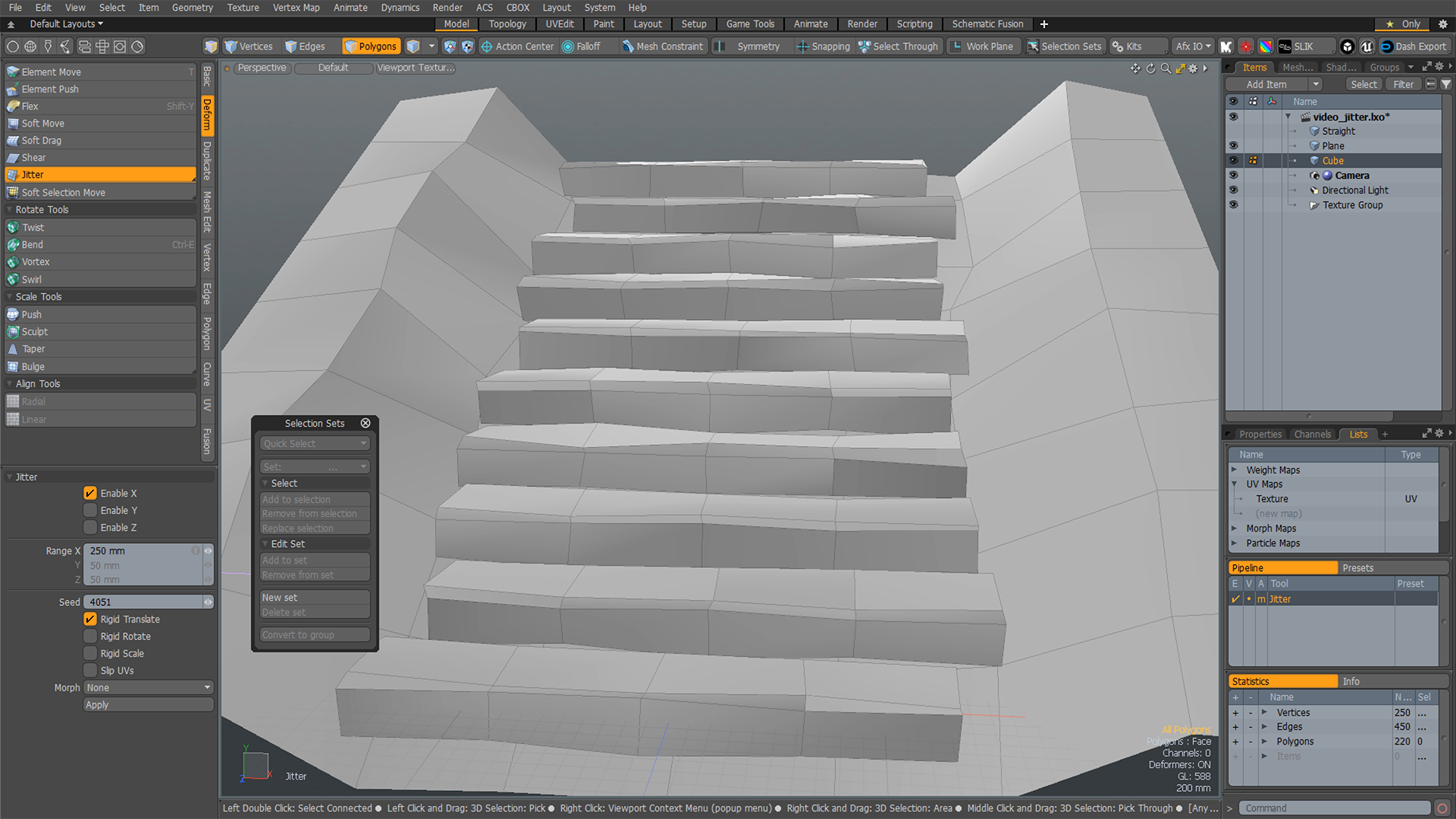 The Jitter tool has new options to randomize the position, scale and rotation of connected geometry within a single Item. It also works with connected selections, allowing you to quickly add subtle realism in situations where previously it would have been difficult. It’s now possible to model even faster in a single 3D viewport by moving objects towards you and away from you without having to interact directly with any transform handles. And a new tool handle has been added to the Vertex Slide tool, giving you greater control when tweaking the position of vertices in a mesh. 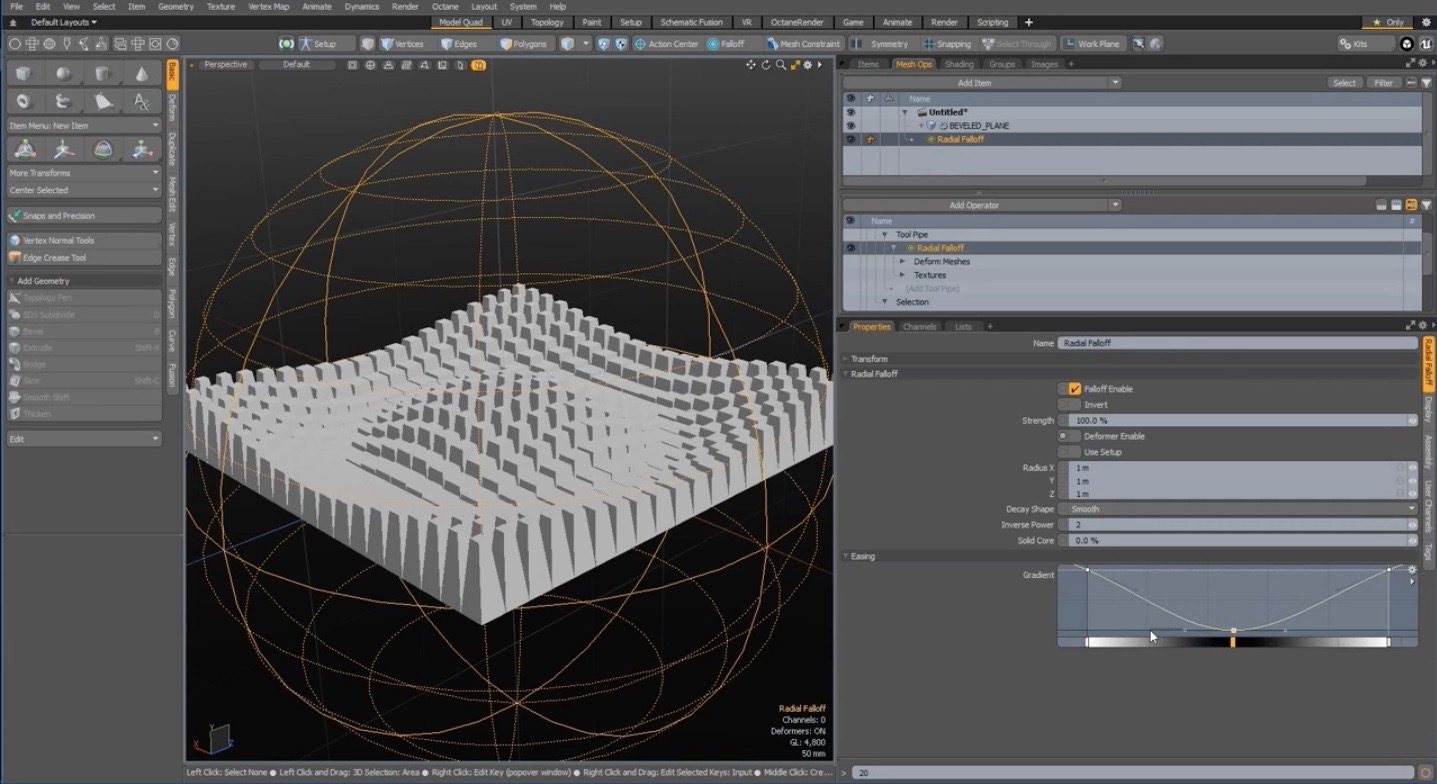 A Triangulate MeshOp has been added, which lets you export triangulated models in a non- destructive manner. The Merge Mesh operator can now read replicator items as geometry inputs, allowing replicated geometry to be manipulated using procedural modeling tools, and providing an easy way to convert a replicator item into a single mesh item for export. It’s now possible to modulate the shape of an Item Falloff via the Mini Graph Editor, allowing for a much wider array of falloff effects when rigging or procedural modelling. The new Falloff Operator lets you drive Mesh Operation Falloffs via a range of scene and geometric parameters. 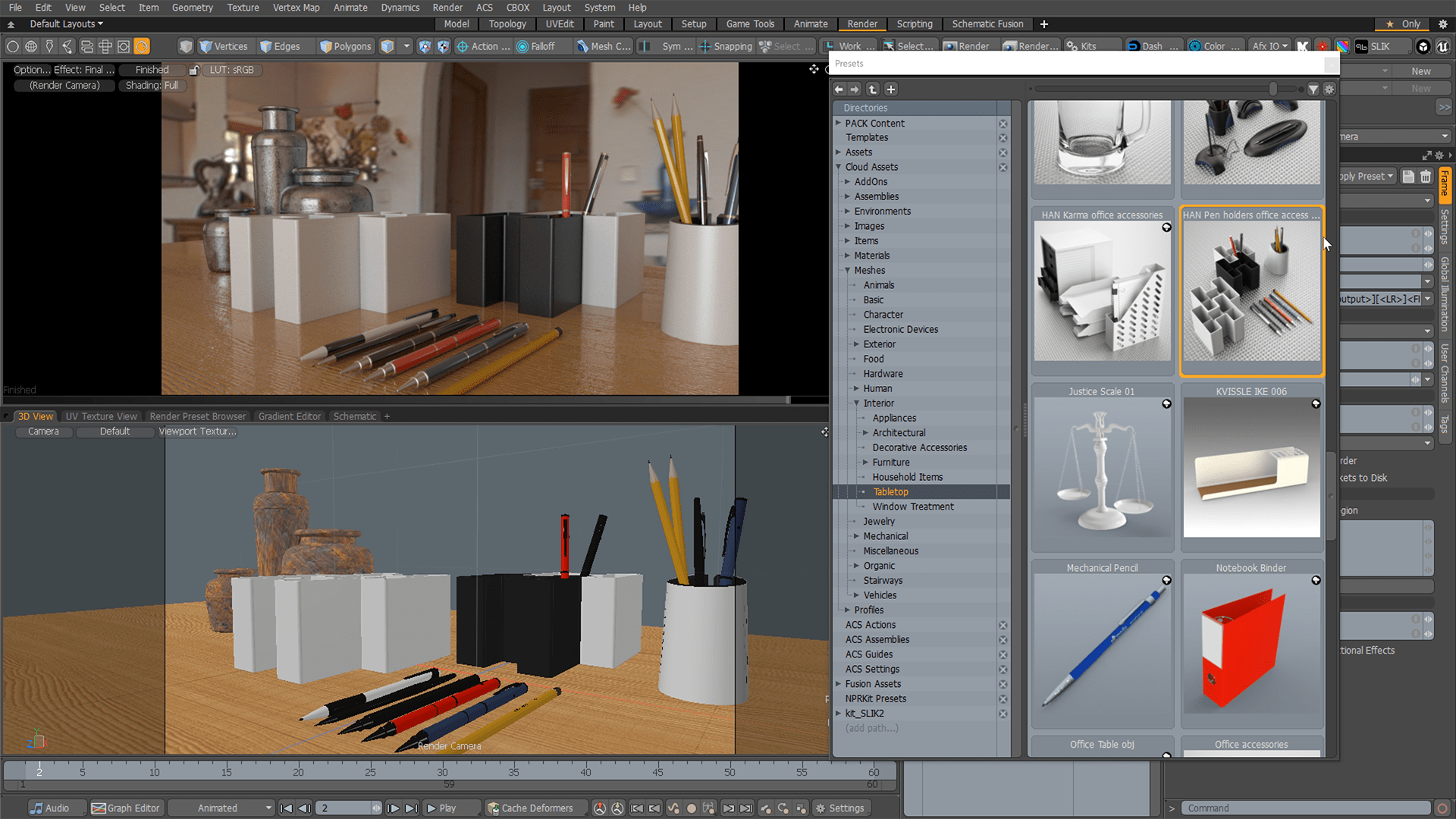 Creating, sharing and downloading preset assets has been improved. Cloud Assets can now be dragged and dropped into the item tree or directly into the Modo viewport. Just want to download the assets and not apply them to your scene? Use the new download badge that appears in the upper left of the preset thumbnail. The process of preset creation has also been significantly streamlined. It’s now possible to create any preset type by simply dragging from it's location in the UI into any preset browser. 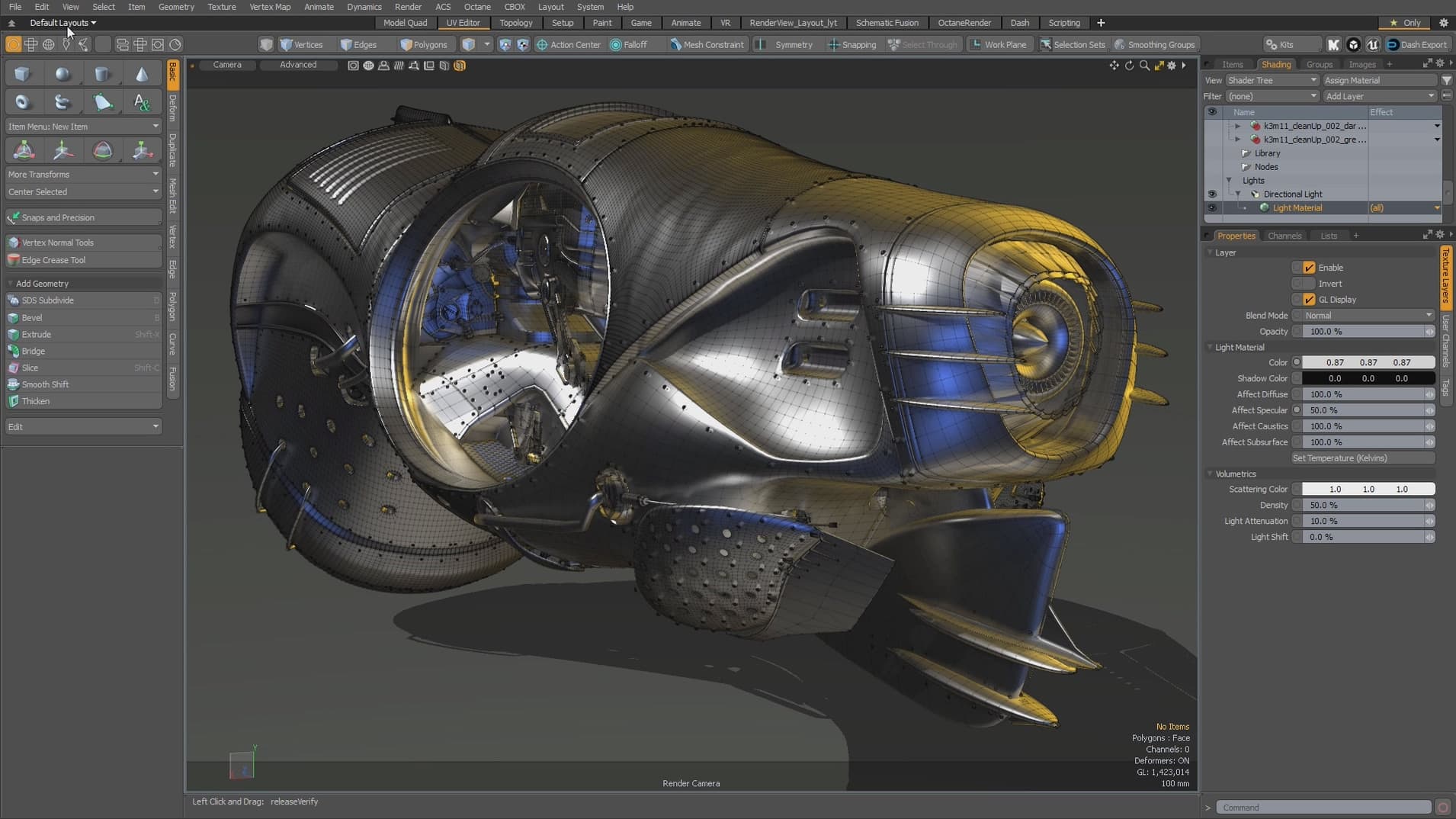 Modo's fast and nimble workflows continue to be refined, with UI optimization and new toolbar menu options making it easier to manage 3rd party Modo Add-ons. The Modo Modes toolbar has been re-organized for more consistency, with a number of modes now having improved workflows, vastly reducing the number of clicks involved in a standard Modo modelling session, while the UV viewport has new buttons to give easy access to a range of common display options. The Fit UVs command has new Gaps options to set border padding. Also, it’s now easier to align multiple UV selections in one go. 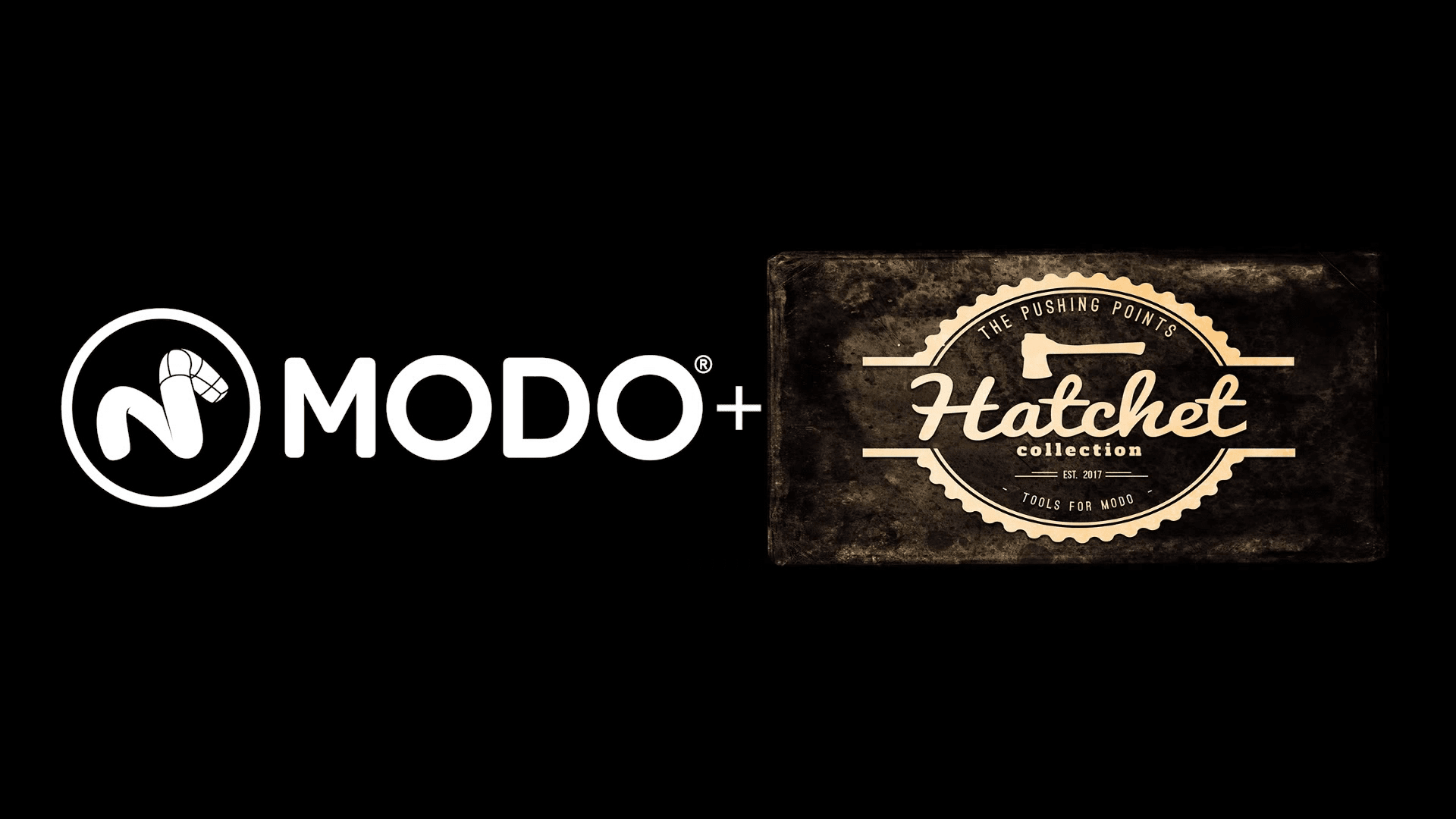 Modo 12.0 comes with a selection of python scripts from the popular Hatchet Collection, enhancing core functionality in Modo and making asset creation even more efficient. There's a wide variety of tools to convert curve types, offset curves, select random, and much more. 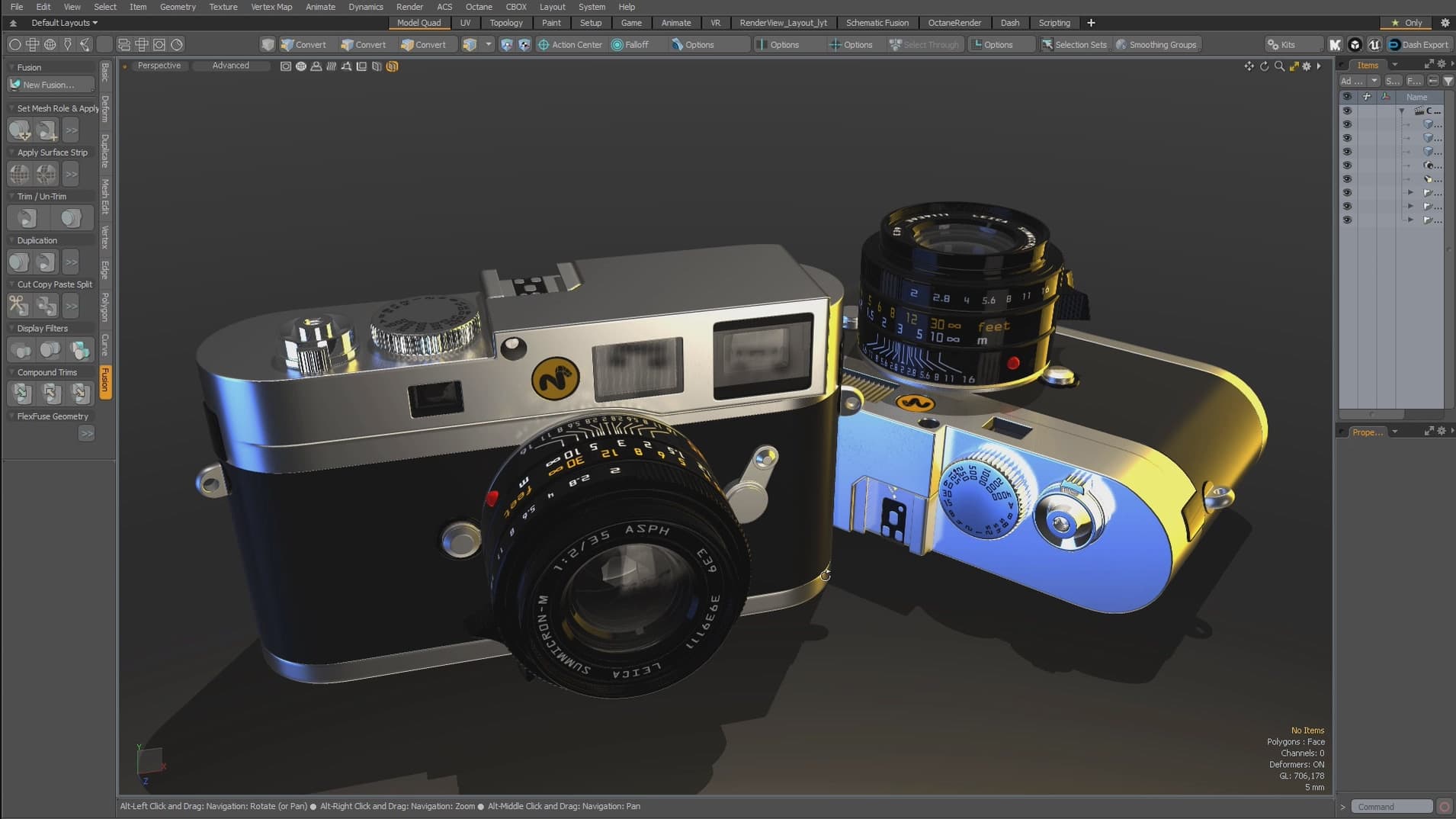 The Advanced Viewport in Modo now uses Multi Sample Anti-Aliasing (MSAA) GPU hardware to speed up anti-aliased rendering. This is a faster, rough and ready version of an also-available Supersampling method. The new GPU powered Anisotropic texture filtering provides superior viewport texture quality in virtually all cases, at the slight expense of performance. 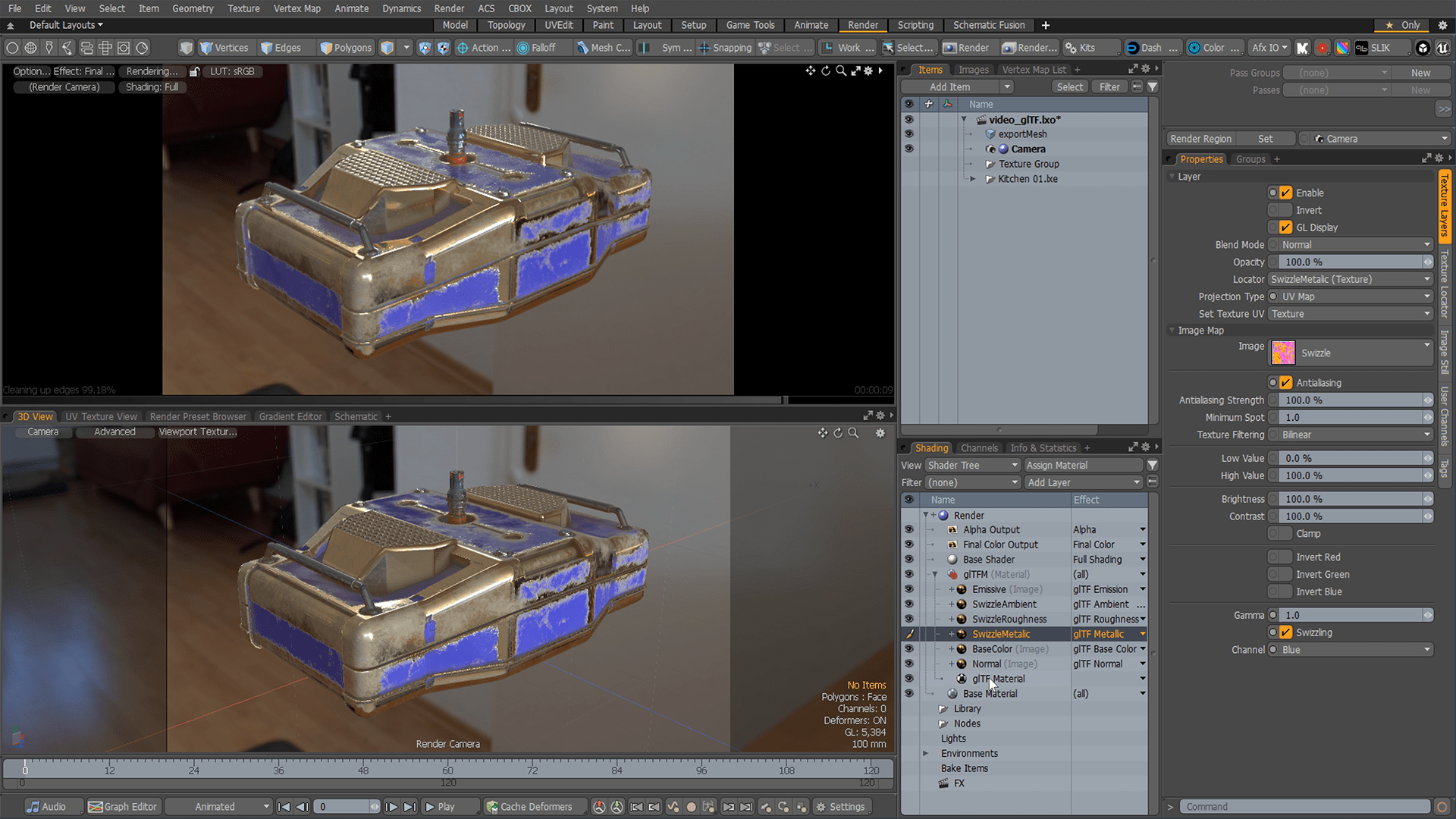 Providing a much more flexible way of rendering specific frames, a new frame range channel has been added that controls which frames are to be rendered during animation rendering. The new glTF Material Shader allows for complete WYSIWYG between Modo's native renderer, the advanced viewport, and any other application that supports the glTF shading model. A Shading Model drop-down has also been added that includes both PBR & Unlit settings.