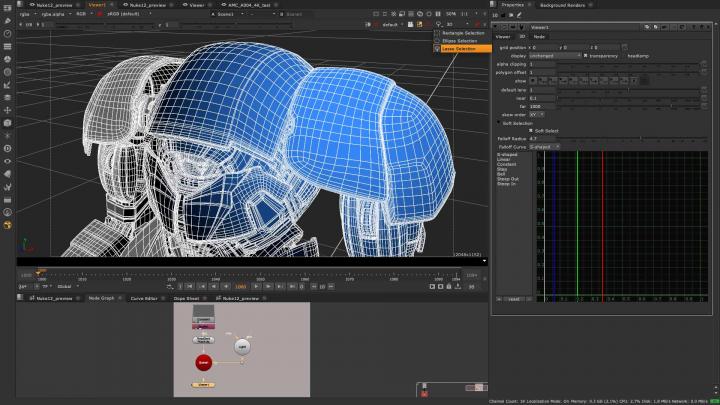 The Soft Selection feature extends how you can interact with geometry and cards in the 3D viewer. Soft Selection gives you a customizable falloff to your geometry vertex, face, or edge selection. Combined with Nuke 11.3’s lasso selection mode, this feature makes modifying geometry for projection setups, last minute adjustments, or any number of 3D workflows more streamlined. 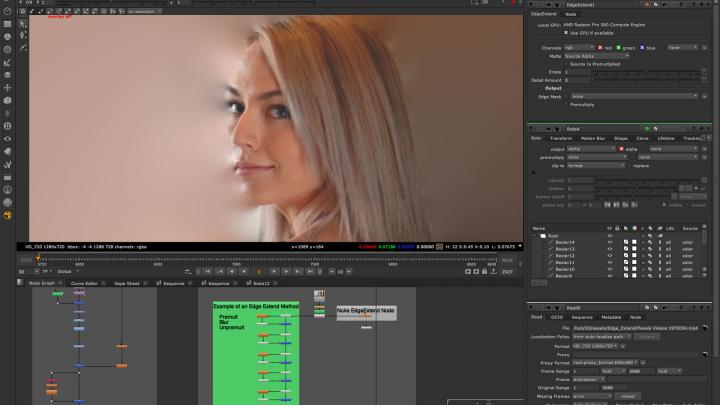 Discover Edge Extend, one of our new GPU accelerated nodes for common compositing tasks. Edge Extend speeds up artist’s everyday workflows, allowing you to erode or dilate your sample region to pull pixels from deeper inside your alpha. As well as giving you the ability to recover the original detail and noise with no introduction of artifacts. 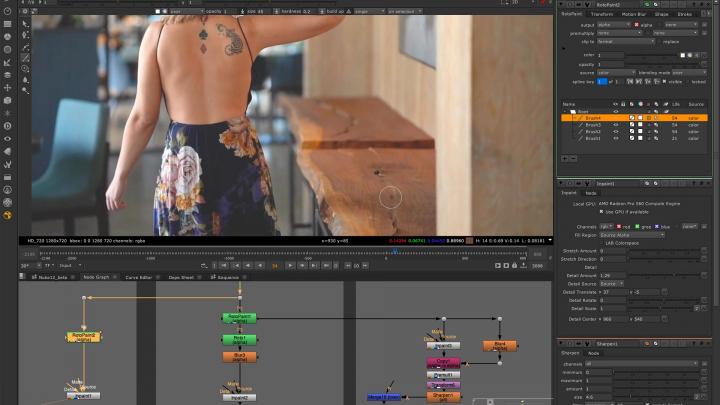 Introducing Inpaint, the second of our new GPU accelerated nodes. Our Inpaint node gives you the ability to create contextual paint strokes similar to Photoshop’s Healing Brush, whilst controlling the level of detail, or pulling this detail from another part of the source image, or a second image entirely. 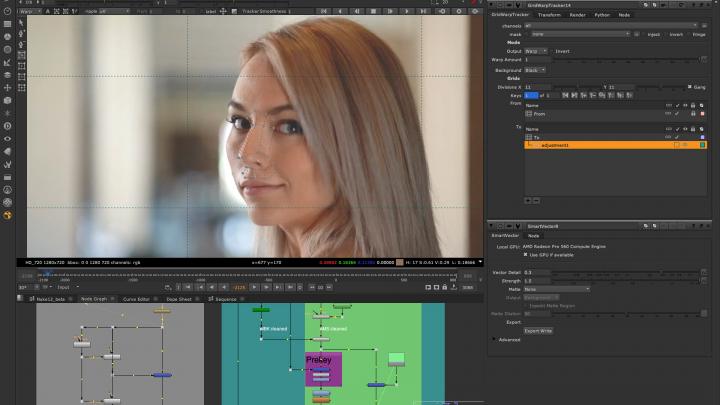 The Grid Warp Tracker helps create match moves, track warps and morphs, as well as allowing you to warp across custom defined grid shapes and use Smart Vectors to drive the grids. The 'To and From' grid workflow enables you to add and copy tracking data between grids, allowing you to retest or make amendments without losing your original data, or having to create a backup version. Exclusively in NukeX, you can use Smart Vectors to drive the grids or set multiple grids for finer adjustments.

The majority of Cara VR’s nodes are now integrated into NukeX. This includes a suite of GPU enabled tools for VR and stereo workflows, as well as enhancing traditional camera solving and clean up workflows. Multiple camera setups become easier to manage with Cara VR’s Camera Solver, allowing artists to easily toggle between custom camera setups and solve, to generate a single image. The CameraIngest nodes allows you to easily import cameras from CG or other packages, to use with the Camera Solver. As part of this merge, VR Headset support will be available across the Nuke family, including in Nuke, Nuke Studio, and Hiero. 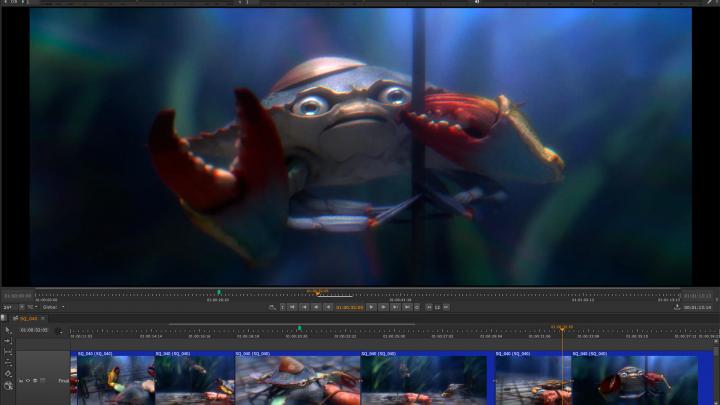 This release includes much more stable playback across the timeline-based tools in the Nuke family. The update comes as a result of new timing and control logic in the playback engine, optimized for the heavy I/O demands of color managed workflows with multichannel EXRs, especially at higher resolutions and frame rates. 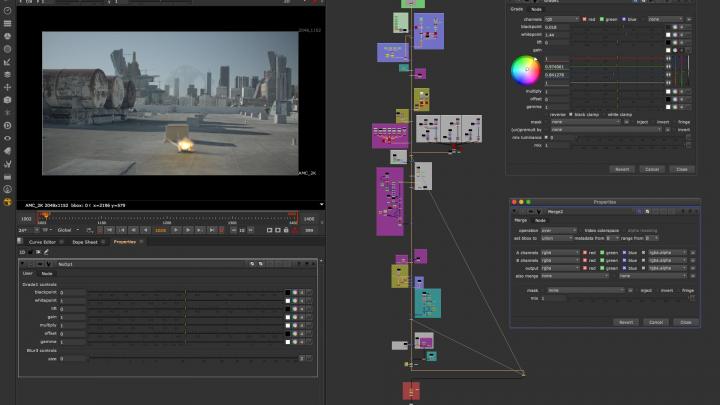 Nuke 12.0 ships with a variety of optimizations, throughout the software, to improve performance, especially when working at scale. One key improvement offers a much smoother experience when working on large projects and noticeably maintains UI interactivity when working in scripts with over 1,000 nodes. This benefit extends to scripts with many nodes encapsulated in Groups and Live Groups and also results in faster loading of large scripts. 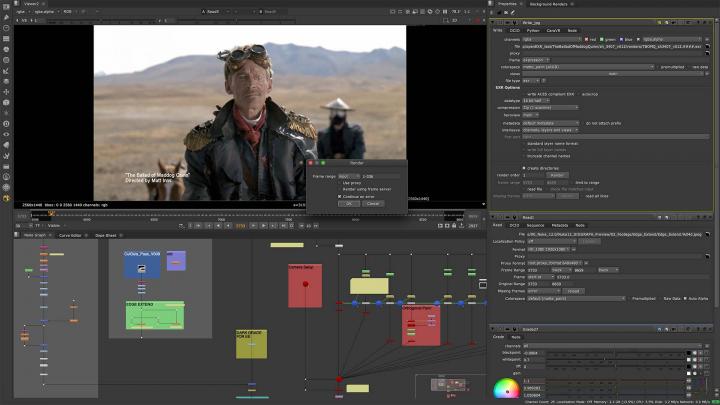 We’ve optimized performance of both reading and writing of EXRs. Some of the biggest improvements are seen when using planar-based compression types, such as PIZ, Zip16, DWAA and DWAB, allowing for faster reading of files, whether locally from disk or off a network. Reading in data can be a major performance bottleneck, improving read speeds adds to interactive performance and reduces processing time when rendering scripts. 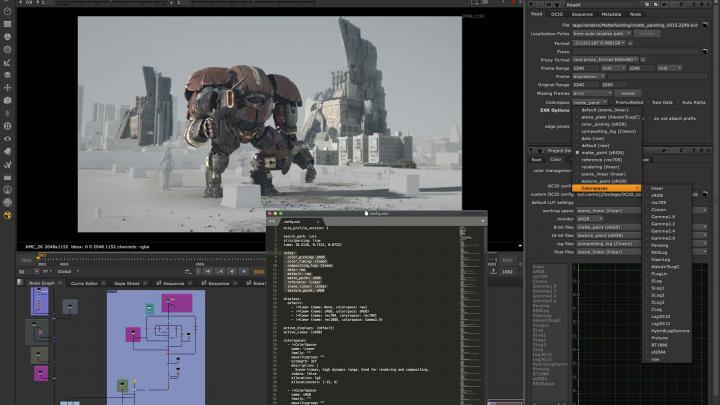 The Nuke family now supports OCIO roles, which allows you to set custom role names as an alias for a specific colorspace, making it easier for artists to know which LUT to use and to share scripts between projects or facilities. You still get access to all the colorspace options you always have, but now the roles can act as a quick way to understand the color workflow of a given show. We’ve also improved error handling, so when artists are switching between shows, there isn’t any mishandling of which roles or LUTs are available or should be used. 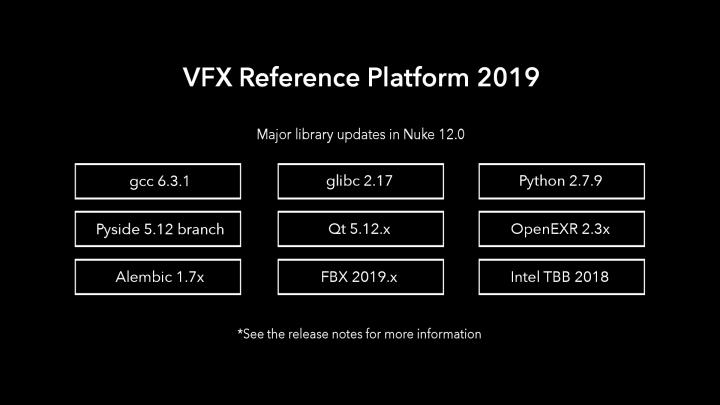 Nuke 12.0 supports VFX Reference Platform 2019, which sees Nuke using the latest versions of Qt and OpenEXR. The RED SDK has been upgraded to version 7.1, including support for CUDA-based GPU decoding of RED files in Nuke and NukeX. Sony SDK version 3.3 adds support for v4 of the VENICE camera and X-OCN XT files. SDKs for BlackMagic and AJA monitor out cards have also been upgraded to the latest major versions. Additionally, the Nuke family now supports reading of DNxHR encoded .mxf files. See the Tech specs and release notes for full details of updated format, GPU and operating system support. 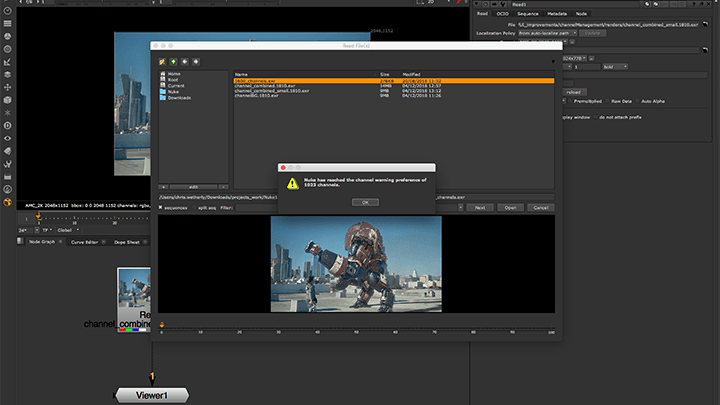 Nuke 11.3 brings updates to the UI for bounding box size and channel count which make it easy to see the state of these common performance bottlenecks at a glance. New selection modes give artists more options for selecting areas of objects in 2D and 3D views.

Artists can now look at the node graph and know the state of the bounding box at a glance. Different warning indications help users understand where a bounding box may be unnecessarily large and perform corrective action to help manage script performance and render efficiency.

The selection tool has been improved in both 3D and 2D views, including new modes. Users can now select areas of a certain shape with the marquee tools or use the lasso tool to make a selection by tracing the edges of any shape. Additional hotkeys have been added, allowing users to both draw a rectangular or ellipse selection from center and constrain it to square or circle.

New channel count indication and warning make it easier to avoid accidentally exceeding Nuke’s channel limit. A new channel count has been added to the Nuke and Nuke Studio status bar. When reading in EXRs, a warning will shows when the per project  channel limit of 1024 is reached. Users can specify a lower channel threshold in the preferences. 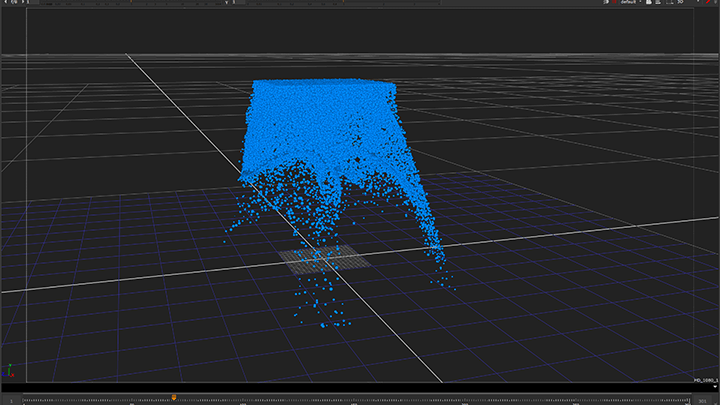 NukeX’s particle system has been optimized to produce up to 6x faster particle simulations and 4x faster playback of particles in the viewer. In our tests, improvements are seen at any scale, with more improvement in simulations with a higher number of particles. For custom particle plug-in developers, while existing code will still compile, you can take advantage of new APIs to benefit from similar performance gains. See the documentation for full details. 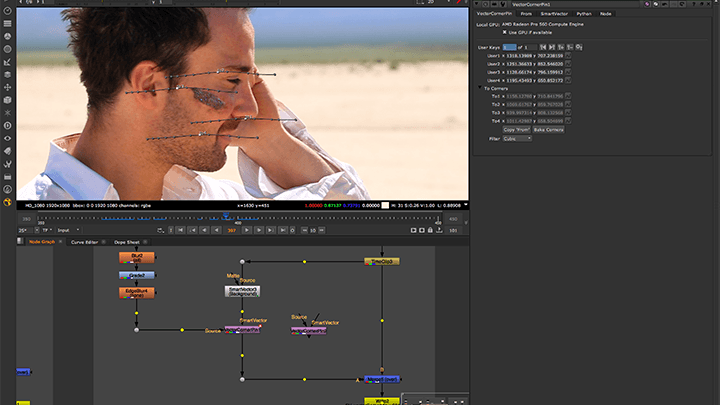 A new VectorCornerPin node has been added to the Smart Vector toolset in NukeX. This node uses Smart Vectors to warp a corner-pinned image between keyframes. The user can set keyframes using ‘to’ and ‘from’ knobs, just like in the CornerPin node, but between keyframes the source image will move according to the additional Smart Vector input. This allows users a high level of control to constrain elements in a specific location, while still utilising the power of Smart Vectors to drive the underlying distortion of an element. Using the Vector Corner Pin can reduce the need to create multiple VectorDistort nodes with different reference frames and mix between them. 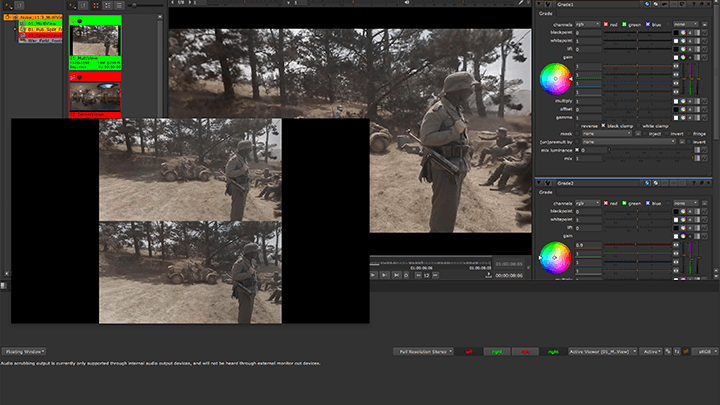 New Timeline Multiview support means you can now utilize the same multi file workflows that exist in Nuke on the Nuke Studio and Hiero timeline, with support for the %V token on import, an automatic detect views option, new project settings and preferences, create comp and blend tracks support and a ‘split views to tracks’ feature that automatically copies and adds soft effects to the appropriate tracks. There’s also support for full resolution stereo on monitor out to help make review sessions even easier and a new export preset to help with rendering. 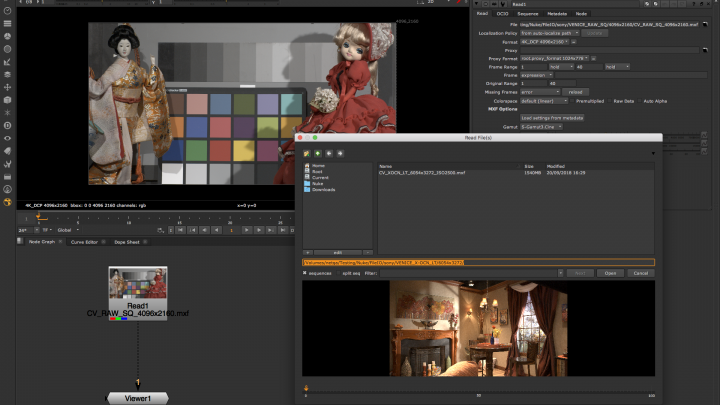 We've made a number of updates to support the latest versions of popular cameras and eGPUs. Sony RAW SDK has been upgraded from version 2.4 to 3.1. Footage from the Sony VENICE camera, and X-OCN encoded footage from the F5, F55 and VENICE is now supported. The ARRI SDK has also been upgraded to version 6. And support has been added for AMD cards in eGPU set-ups for Mac OS 10.13.5 and later. The Sonnet eGFX Breakaway box and BlackMagic eGPU have both been tested with Nuke 11.3.