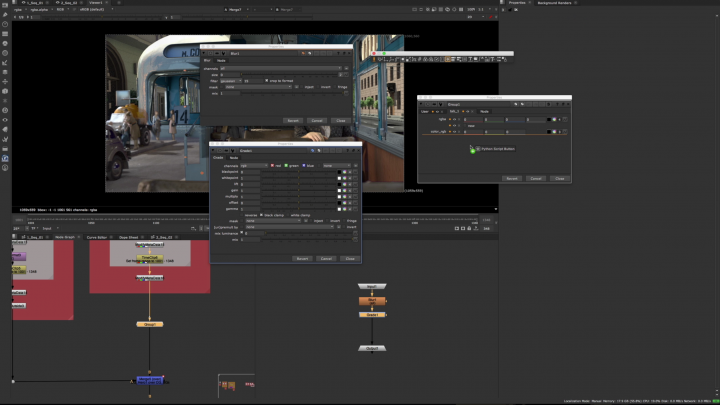 Nuke 11.2 includes updates to the UI, dramatically speeding up tasks artists do multiple times a day. We’ve made a raft of improvements to the tab menu, making it faster to find and add nodes to a script, including an improved search that enables artists to find any node with three or fewer characters, and the ability to favorite commonly used nodes. Great for adding user knobs to LiveGroups and Gizmos, we’ve created a new interface allowing you to drag parameters between nodes, reducing the clicks needed to add a knob from an average of 7 to just 3. 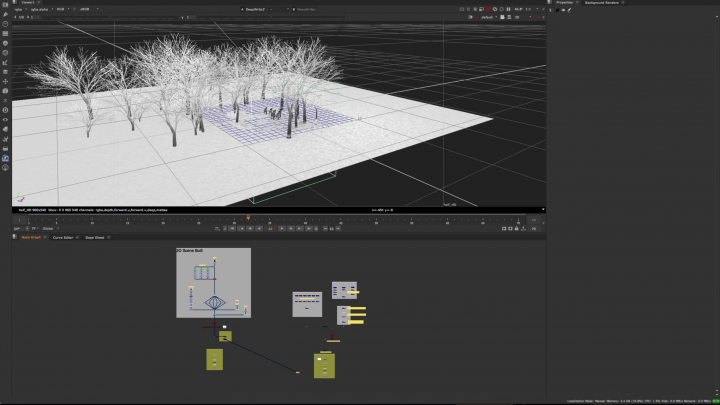 Nuke now has a new API for deep compositing which manages memory more efficiently, resulting in 1.5x faster processing in our tests, with more improvement possible on larger scripts. Performance improvements vary by project and set up: see the release notes for more details on making the most of this update.  In addition to the new API, we’ve made a number bug fixes and improvements to the deep compositing tools, including updates to the DeepExpression node and the ability to use Nuke’s metadata nodes within a deep stream. 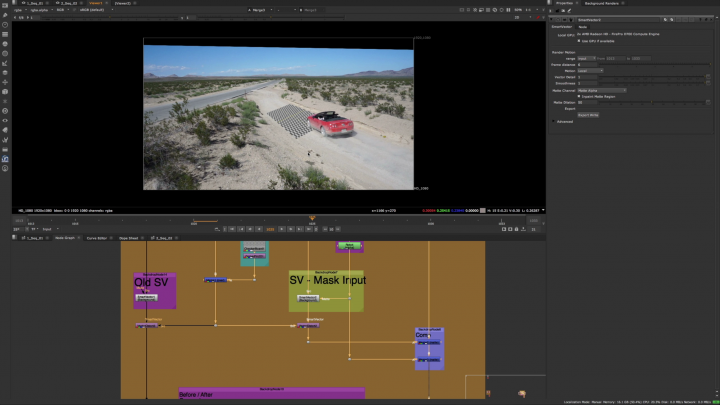 The Smart Vector Toolset has received further updates, opening up new workflows and extending the use cases for the toolset. Smart Vector and Vector Distort have been optimized for the GPU, allowing users to generate Smart Vectors on the fly and preview the result without needing to render the vectors.  Previously, occluding objects would impact motion vectors and influence the distort result. Now, you can set a mask input for motion which the Smart Vector toolset will ignore when warping the applied paint or texture, removing the manual clean-up work that was needed in these cases. 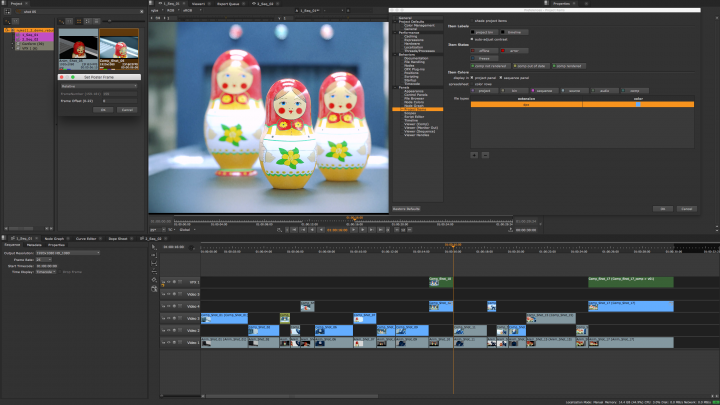 Artists managing projects in Nuke Studio receive a huge boost from a collection of enhancements that make it easier to organize, manage and navigate. This feature also brings new functionality to the spreadsheet and the timeline.

Arrange your project bin in alphabetical or by custom order. There are new buttons at the top of the project bin with controls for the hierarchy view and the bin view independently.

The search functionality in the project bin and spreadsheet has been improved, with new options to search all metadata (or not), and to use all (or any) of the words that are input in the search field.

Users can now set the poster frame for clips in the bin and timeline. This can be set for single or multiple clips at a time by using either absolute or relative frames: great for shots with slates or black handles.

Users can now assign colors to clips in the project bin, which will also be shown on the timeline and spreadsheet. Colors can be set for basic clip types (like audio sequences), and based on file types and versions (like  exr and mov) giving a clear, visual way to identify when a version of a clip is full res or a mov WIP. 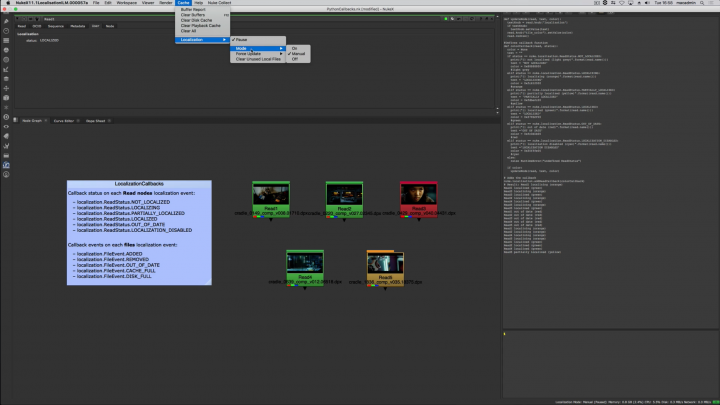 Building on the major updates to localization introduced in Nuke 11.1, we’ve added additional control for managing localized files. There are two new python callbacks for when a Read transitions from "out of date" to "localized" (or vice-versa), and an added function to find out which Read node the localized files belong to. Users now also have the option for out-of-date clips to "switch to the network files": Read nodes that are localized but are "out-of-date" with their network file will automatically redirect to the network file. 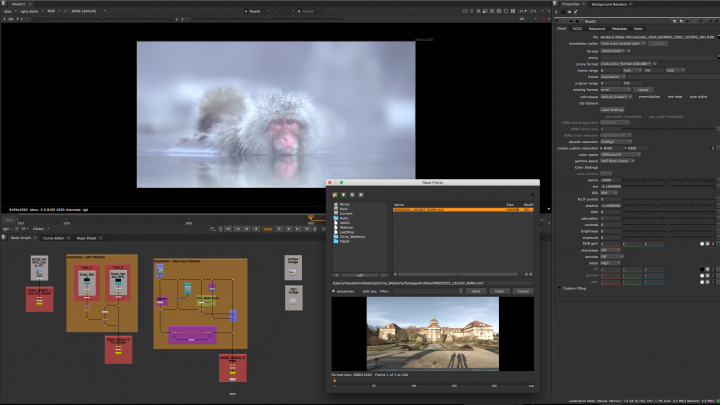 SDKs for ARRI and R3D have been updated. ARRIRAW to version 5.4.3.5 and R3D to 7.0.6. Support for IPP2 is available as of Nuke 11.2v3.
The list of supported GPUs has been expanded to include Integrated GPUs in the 2017 iMac Pro (and later models) and the Radeon Pro WX 9100 and Radeon Pro SSG (GPU component only) on Linux and Windows.
See the Tech specs page and release notes for full details on support and compatibility. 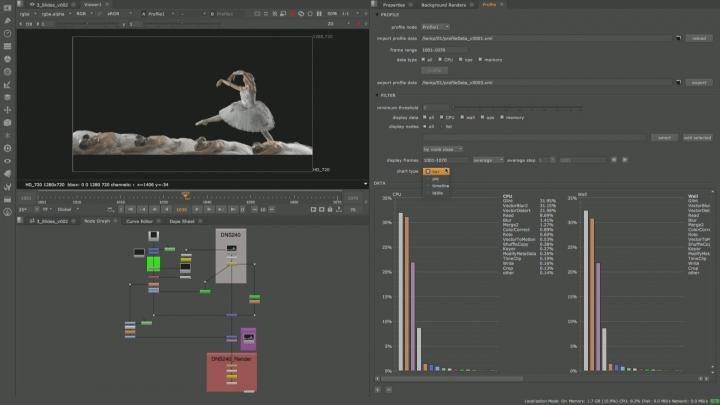 The new Profile node makes Nuke’s performance profiling system easily accessible through the UI. These tools can be used to help identify possible areas for optimisation in a script. A Profile node can be inserted at any point in a script, allowing performance data including CPU time, wall time, number of ops and memory usage, to be captured for all upstream nodes. The resulting data is viewed in a new Profile panel that allows you to display the data in a bar chart, pie chart, as a list of nodes, or across a timeline and filter the data shown using a variety of options. Profile data can be easily exported and viewed in another session of Nuke without the need to load the script or reprofile. 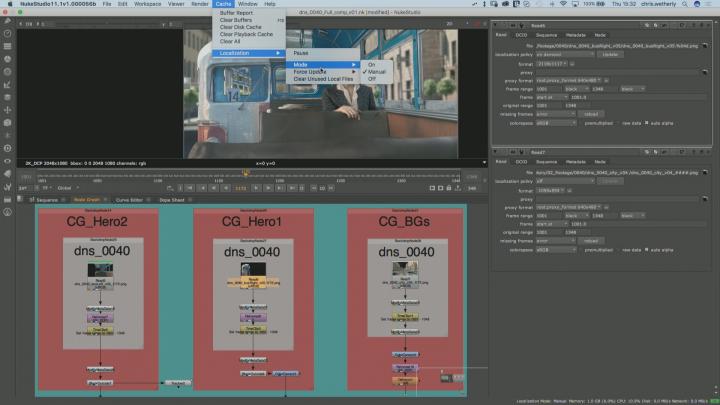 Nuke and Nuke Studio’s file localisation system has been updated to provide more granular control over when and which files are localised; while also introducing more visual cues to showcase the status of localised files, for a more intuitive experience. A new “Manual” mode and “On Demand” policy introduce the ability to localise files, or a subset of files, only when prompted by a user. Manual mode is saved as a preference, allowing you to maintain this setting when opening scripts made by other users which may have different localisation policies. The Python API has been extended to allow developers to set system modes and localization policies programmatically. The API also provides the ability to set localization priority, apply policies based on read node type, and find and remove localised files according to specific criteria. 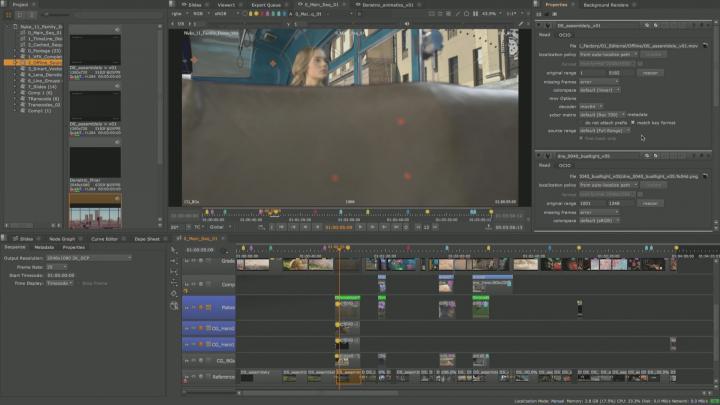 Properties for source clips in the Nuke Studio and Hiero timeline have been extended to offer more consistent properties with Read nodes in Nuke and create more efficient workflows across the Nuke Family. Source clip properties are now shown in a Nuke style Properties panel. This consolidates existing options into a single location, providing faster access and greater control. A new Project root directory allows source footage file paths to be relative, making the sharing of projects between locations or artists easier and more efficient. In addition, source clip properties are accessible through the same Python API as Nuke, improving scripting capabilities and the ability to integrate Nuke Studio into existing pipelines.