Katana’s scalable interactive rendering capabilities create truly formidable look development and lighting workflows in any pipeline. Simultaneously render multiple images as you work across multiple shots, frames, assets, asset variations and other tasks from within one Katana project file. Work with the added horsepower of networked machines for faster renders and scalable feedback, safe in the knowledge that you’re making all the right choices.

Multitasking made easy: thanks to newly-built APIs, Katana now has the ability to run multiple renders at the same time. This allows artists to render images whilst working across shots, assets and tasks in the same file, providing an unmatched workflow in which artists can multitask whilst waiting for renders to deliver feedback on art direction, greatly reducing the iteration cycle time and speeding up the creative process. 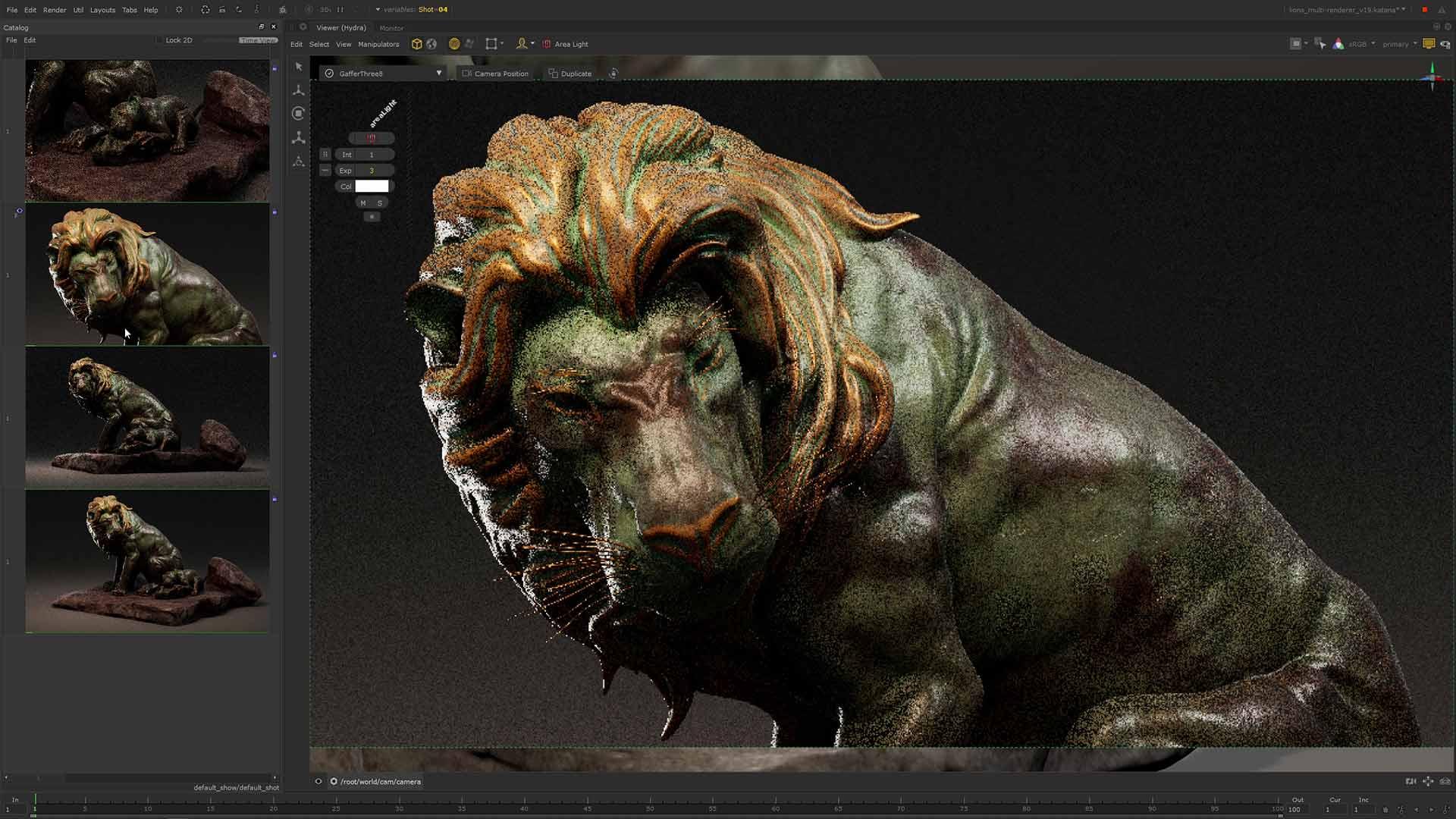 Rendering requires computational power—which is why Networked Interactive Rendering provides the ability for artists to use networked machines other than the one they’re working on to facilitate Multiple Simultaneous Interactive Renders for a single Katana session.

This added ‘oomph’ negates the need for traditional test rendering via batch farm renders—when rendering the image locally would choke the resources of the artist’s workstation—allowing artists to see a render’s interactive progress in the Katana UI and respond as necessary, rather than reacting to a finished frame after it’s done.

Katana’s farm rendering APIs support easy connections to render farm management tools like Deadline, Qube, and Tractor as well as any custom in-house tool. This way, existing render farm resources can be leveraged in dedicated pools for interactive renders during the day and returned to the pool for final frame renders at night. 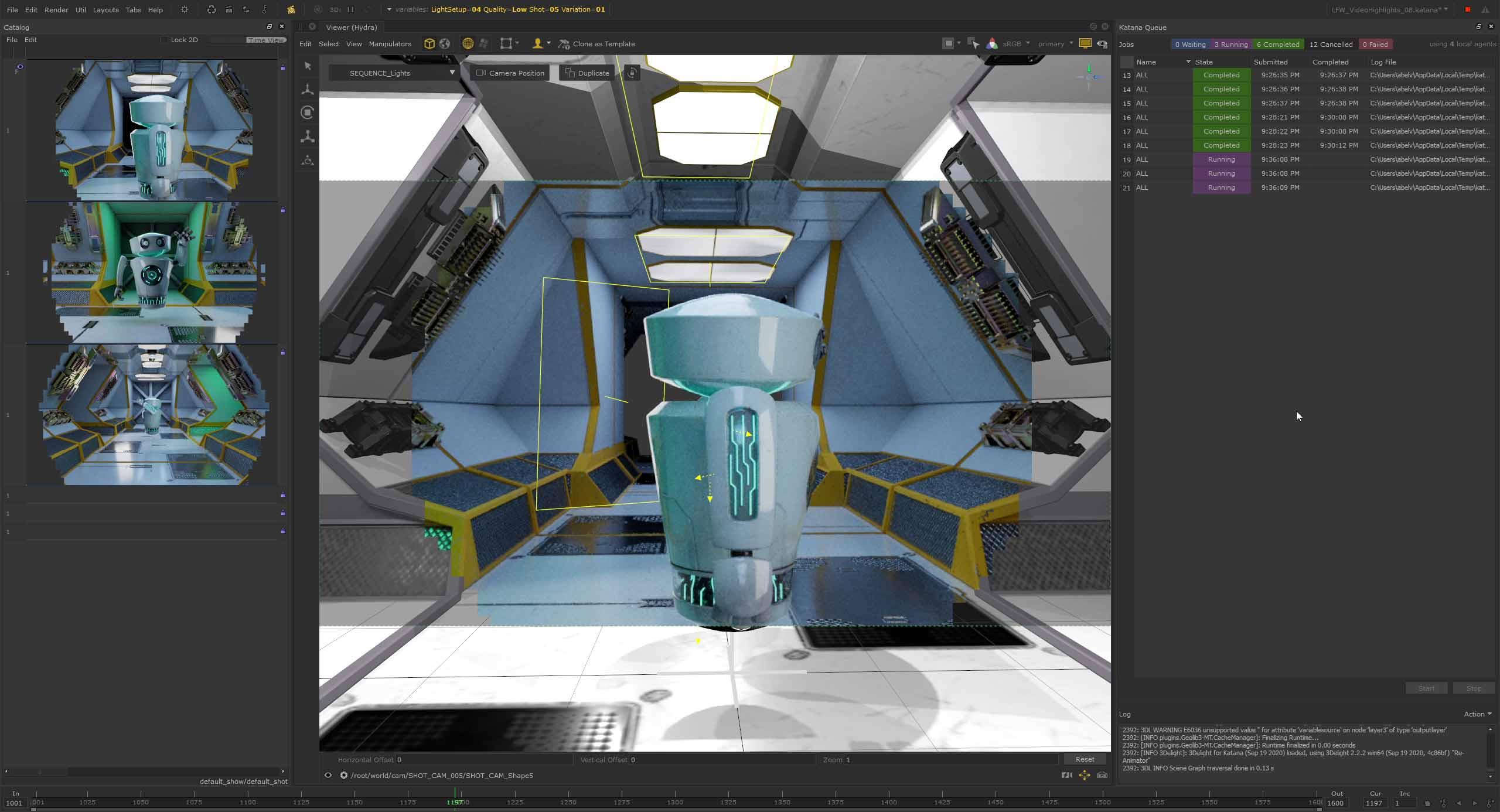 Katana’s ability to create multiple simultaneous renders necessitates the ability to view them. That’s where the Catalog comes in—crucial UI for multiple renders. It can show thumbnails at a user defined size, and update through the course of the images being rendered. Treated as a vertical strip of thumbnails in the left or right Dock, the Catalog becomes incredibly powerful for artists working with multiple simultaneous renders. To allow artists to keep track of what each render shows, the Graph State Variables and Interactive Render Filters are listed as combined or separate columns.

From the Catalog, an artist can choose two images to show at a larger resolution in the Monitor Tab. Displayed side-by-side or one on top of the other, or in a traditional wipe comparison, pan and zoom can be synced or left independent. Artists can compare two images or two parts of the same image whilst working. Meanwhile, Katana’s front buffer will always drive the Monitor Layer in the Viewer which can match your scene state, allowing you to use Katana 4.0’s new lighting mode. 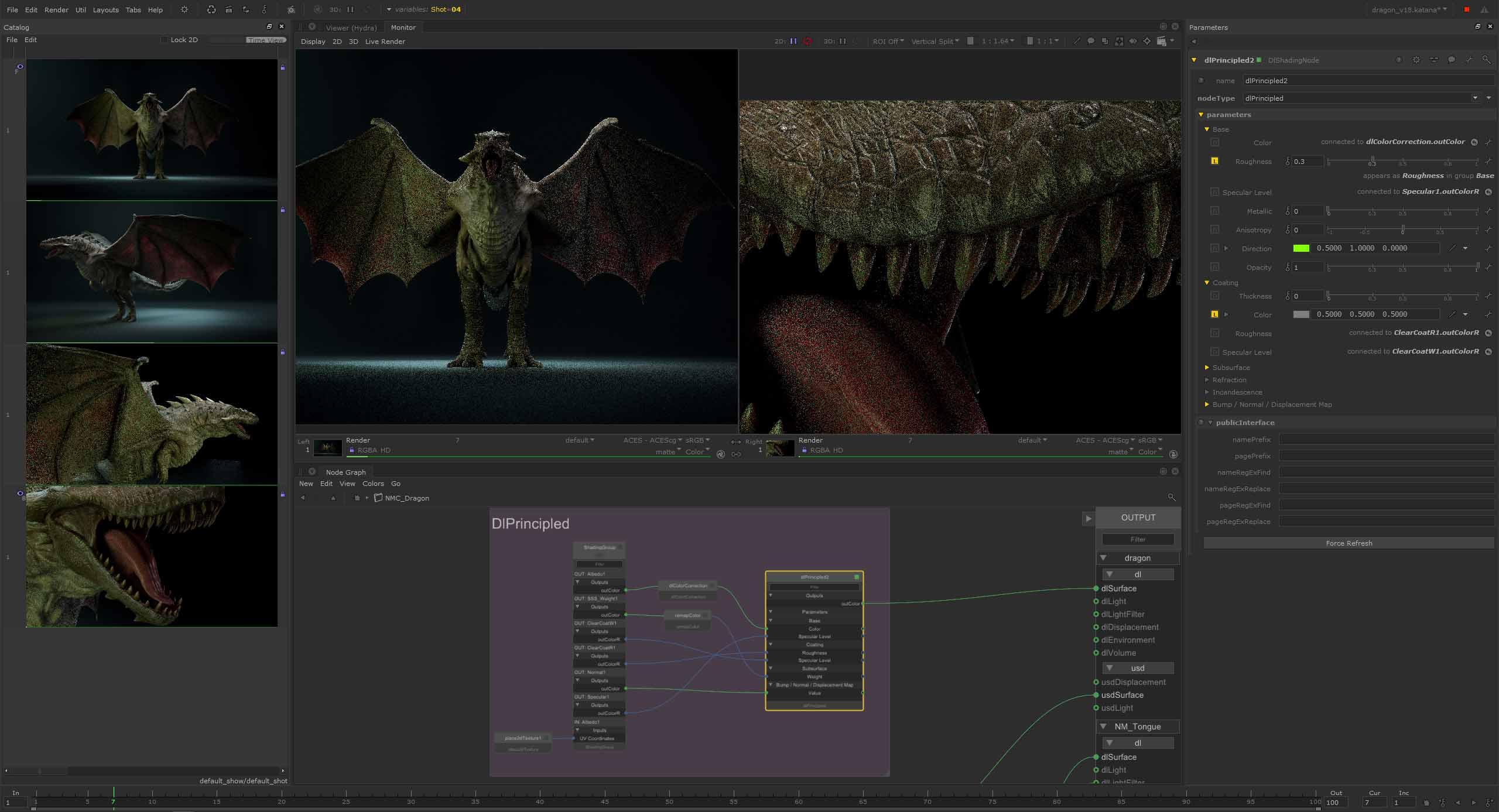 Katana 4.0 ships with Katana Queue—a small render queue system built for the management of multiple renders on an artist’s local machine, or an informal set of networked machines. Katana Queue is ready to work out of the box, but built using the same APIs that connect Katana Foresight workflows to formal render farm management systems. Maximise your machine when multitasking, and even when you’re away for a coffee break or in meetings, thanks to a scalable rendering solution fully controlled by you from a new process control interface called the Katana Queue Tab.

The Katana QueueTab, Katana Queue plugin and an Open Cue plugin are shipped as examples for studios that would like to customize their use of Katana Foresight workflows, or connect these to different render farm management systems. 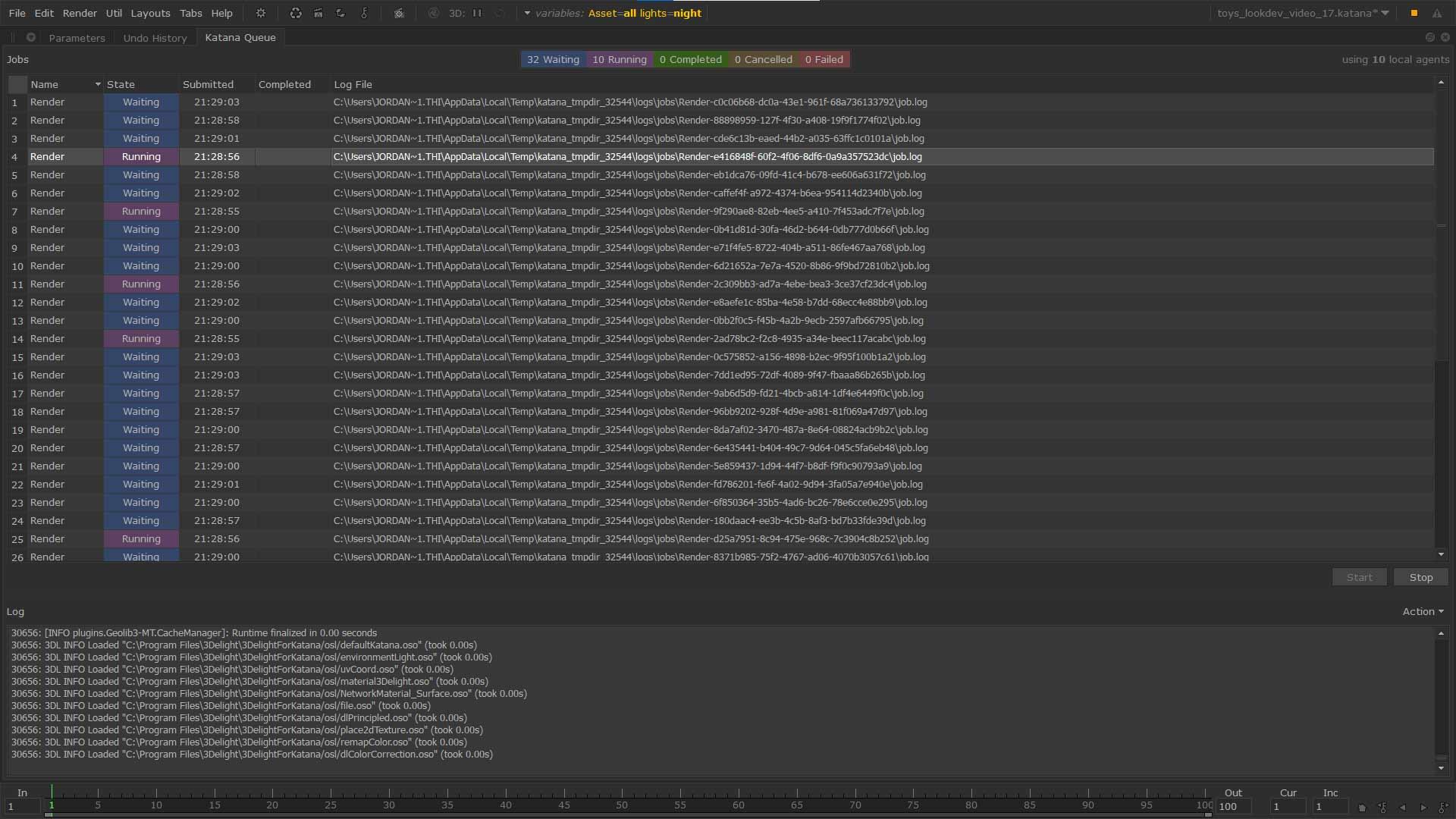 To help studios and artists leverage 4.0’s Foresight workflows, Katana includes an example tool for the submission of a set of renders that power a range of options. This comes in the form of a sample script that creates a simple UI, showing the possible combinations of Render node, frames, and Graph State Variables. Artists can choose which combinations will give them the feedback they need and Katana does the rest. 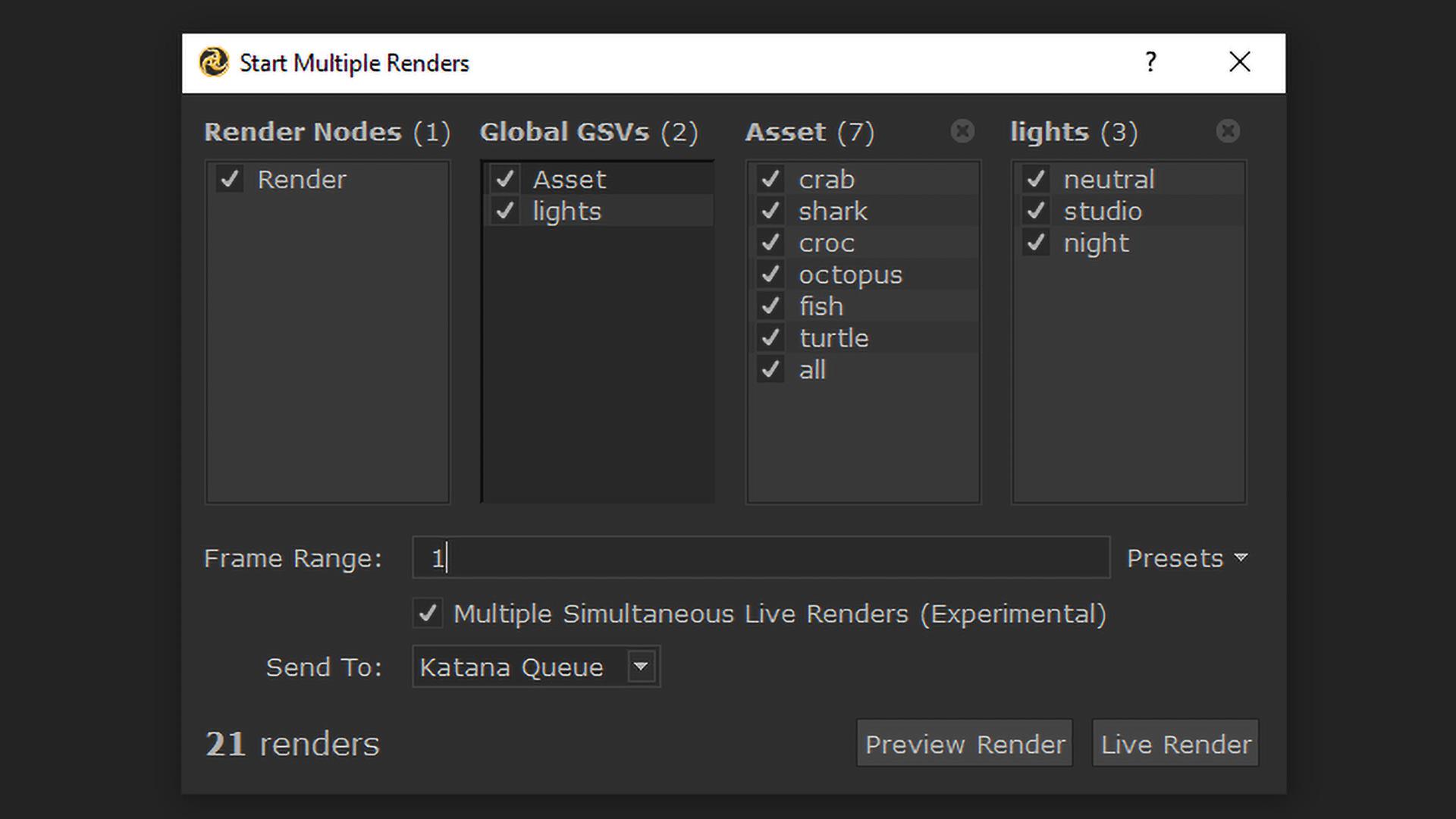 Get first-hand insight into how exactly Katana can fit into your pipeline.

Discover the creative capabilities of Katana with a free 30-day trial.