Hidden in plain sight: the art of invisible VFX

It’s no secret: nowadays, almost all films and TV series utilise VFX (visual effects) in some shape or form.

From the roaring explosions and gunfights synonymous with action-packed blockbusters to the creation of whole new environments, creatures and characters that typify TV epics like The Mandalorian, spectacular VFX have firmly cemented themselves in every filmmaker’s arsenal as an essential storytelling tool.

But what about more subtle forms of fakery—those types of VFX that are used to trick the untrained eye into believing what it’s seeing should be completely part of the scene? Often dubbed ‘invisible VFX’, this type of craft is heavily utilized in productions that don’t feel like they have VFX. Yet more often than not they are just as impressive and take just as much craftsmanship as the type of work done on projects in which the VFX are front-and-centre.

Invisible visual effects typically feature in period dramas in order to accurately represent the world at the time. Taking The Crown as an example, we’ve already written on the care and attention that was poured into the show’s creation—from clean-up work, matte paintings and CGI—to bring this regal slice of history to life. Speaking of the work he and his team completed on the show, Ben Turner, VFX Supervisor, comments: “It's the sort of work that I love. It's invisible VFX work and I just love it when people say, I didn't know there was any CGI in The Crown. And that just makes my day.”

It’s certainly an interesting paradox. When artists and supervisors like Ben succeed in their work, and produce wonderfully executed CG, the general audiences almost never notices—and that’s the point. For truly great visual effects to serve—not overshadow—story and character, they must, by their very definition, be invisible.

Below, we take a look at some of the most recent and interesting uses of invisible VFX to appear on our screen and streams that work to create truly compelling stories, convincing worlds, and believable characters.

Gone in a flash

Stepping away from the genteel world of English high society à la The Crown, 2019’s oscar-nominated Ford vs Ferrari use of invisible VFX fuels a fast-paced, high-octane narrative that takes audiences back to the hallowed race venues of the 1960s—many of which no longer exist today.

Some of Ford vs Ferrari’s 1,048 VFX shots go towards recreating these same venues, with footage having been shot at specific locations that could be accurately transformed through masterful visual effects. 1960s Le Mans, for example, is made up of footage shot from Georgia and Southern California. It was then on the VFX team to immerse audiences through digital cheering crowds, CG cars and augmented crashes, in an effort to convince this same audience that what they’re seeing is 100% real.

Yet doing so is no small feat. Time moves fast—and society with it—so recreating history, even a period that’s just fifty or so years in the past, requires lots of research to ensure that everything digitally built is time accurate to assuage even the most eagle-eyed viewers. And with a film as fast-paced as Ford v Ferrari, quick cuts are par for the course—so continuity is everything. To make edits work between shots, additional or re-skinned CG cars were needed by the editorial department so that everything flowed as smoothly as possible.

We caught up with Sarah Fuller, Look Development Lead at Method Studios, to find out what it took to create these same cars as part of entire sequences—and how Foundry tools Mari and Katana supported the team’s vision. Watch the interview here.

A trip down memory lane

Shot in black-and-white, Mank is a predicted Oscar nominee for best VFX—with many of it invisible. One vendor to work on the film was Territory Studio, whose team were briefed with re-creating Wilshire Boulevard from the 1930s. Doing so involved subtle augmentations to tell the period story.

Mank director David Fincher’s initial vision was to make a 1930s style film, combining rear projection with the very latest digital technology to improve upon the classic technique and transport audiences back to Hollywood’s golden era. 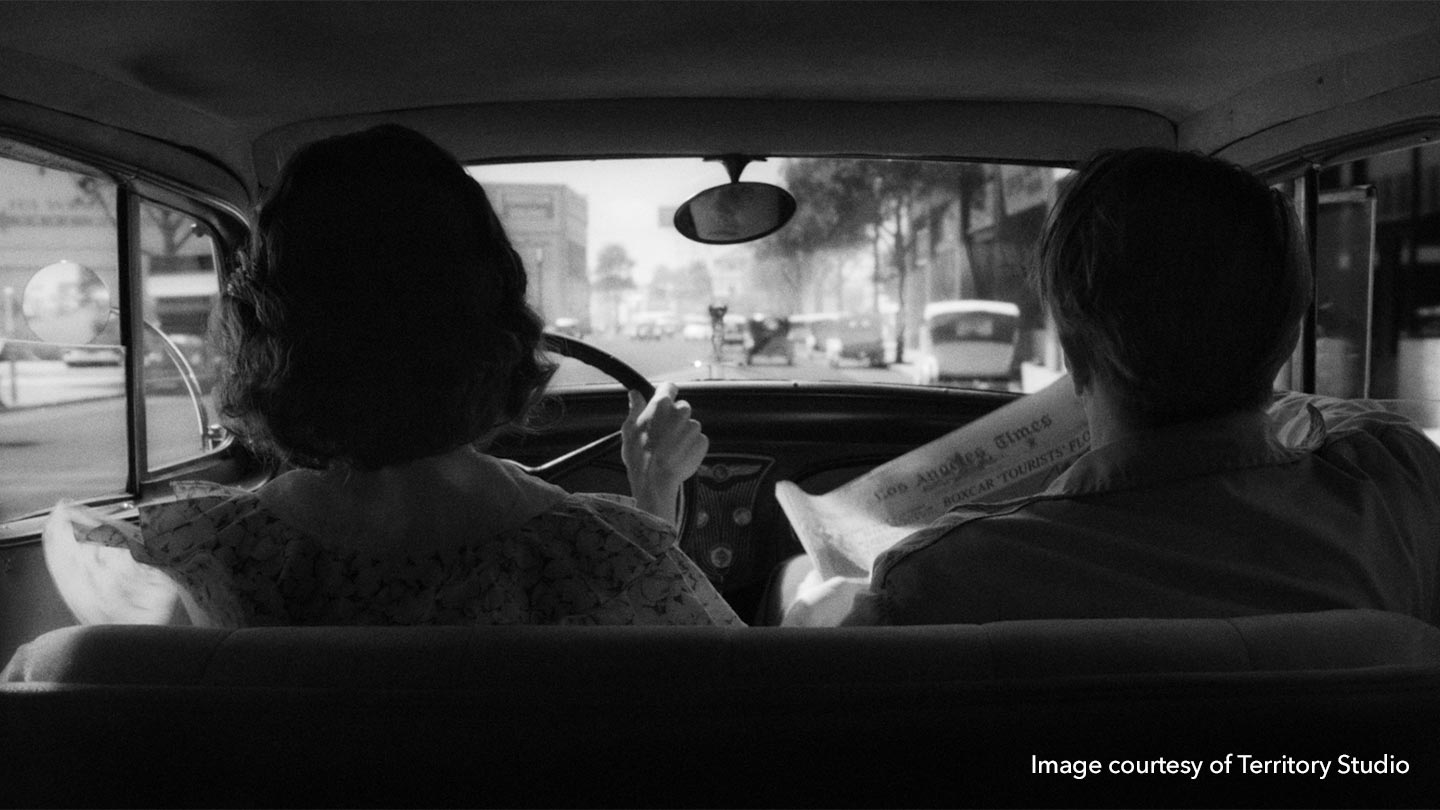 To kick off the project, Territory began with an archive clip shot for rear projection use in the 30s. Combining this archive footage with on-location scouting in LA, alongside Google Maps, the team drew up the ground plan along which to drive a virtual camera car.

At this point, the classic Hollywood technique of rear projection—with actors surrounded by the environment in which they were driving—was combined with the latest LED technology and CG camera projections to provide the finished picture live on set, for closer creative collaboration between production and post teams.

Renders were checked back through Nuke cameras to ensure that they would line up, ensuring that parallax and the sightlines aligned with what the camera would see if it were physically travelling through the real-world environment. What results is a totally seamless digital backlot that transports viewers to a true representation of Wilshire Boulevard in a stunning display of artistic and technical prowess. 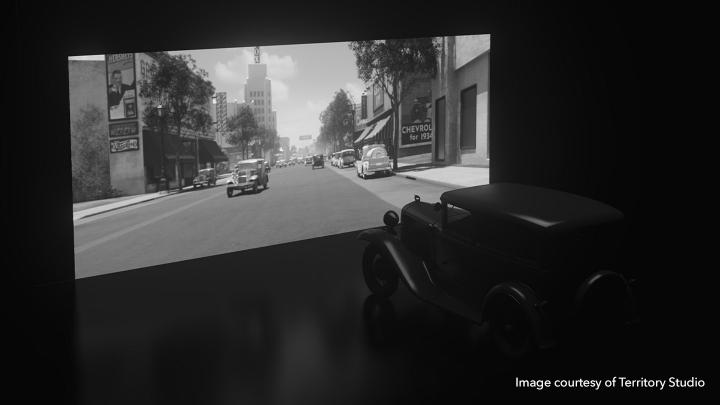 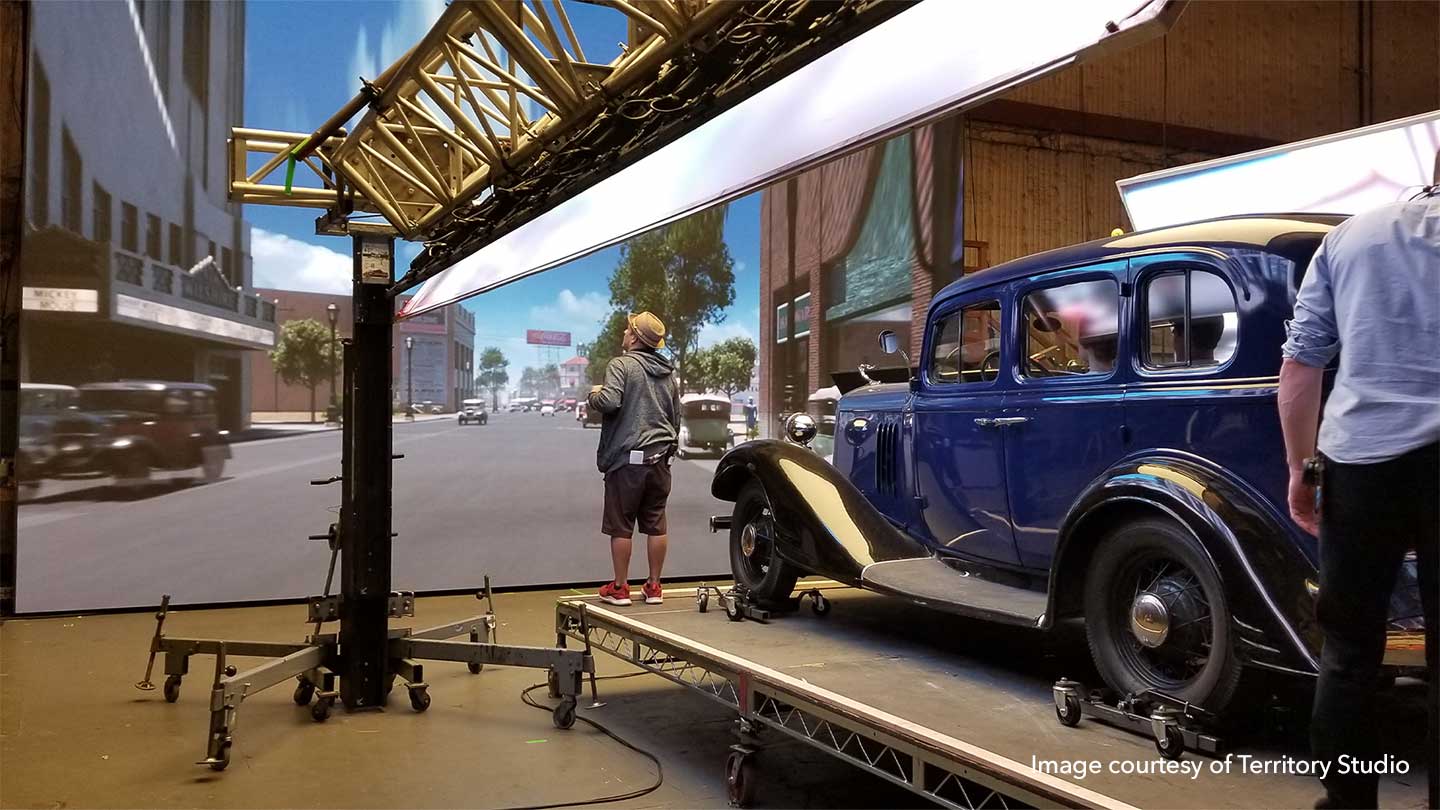 Of course, there are countless other examples of visual effects so good, you don’t even notice them. An honourable mention goes to Japanese suspense-thriller Alice in Borderland, now streaming on Netflix, which includes wide-angle, expansive shots of a completely desolate, dystopian Tokyo. Viewers are left wondering if the production crew really did block off busy areas in Tokyo for filming, such as Shibuya Station—but, of course, it was all down to savvy use of VFX.

CG was used on the show to create rustling leaves, flapping flags, and moving birds and animals to offset any danger of an empty Tokyo looking like a photograph. For familiar locations, images of Tokyo were digitally placed into the backgrounds of shots filmed outside of the city.

Meanwhile, in Knives Out, one shot was filmed “day-for-night”—it was captured in the day and turned into a nighttime shot—whilst The Haunting of Bly Manor left viewers bamboozled on discovering that the biggest VFX element of the series was the manor itself. Completely computer-generated throughout the entire series, the manor’s exterior facade is CG, with interiors built on soundstages.

Two sides to every story

For each of the examples above, a core challenge lies in harmonizing materials with animation. Even if the former looks realistic, the latter can sometimes betray the fact that the asset is CG, and poof—suddenly the smoke clears, and the VFX is obvious for audiences.

Often, to combat this, animators will work off real-world reference footage or data captured from an actor. When this technique is combined with ultra-realistic materials, then something truly amazing results.

Yet is the notion that invisible VFX = good VFX too arbitrary a distinction?

It’s true that audiences almost never see a great movie with awful VFX. But perhaps this is because the story, narrative and craft that typically underpin acclaimed films so enchants us that we’re more likely to forgive and forget VFX that’s sub-par, or ‘visible’. For films where the opposite is true, marked by the sentiment that the ‘VFX is ruining the movie’, perhaps the problem isn’t with the VFX but rather with the movie itself. CG is just one tool to tell a story, not the whole story itself—and it’s up to the filmmaker to wield the tool wisely.

Try your hand at invisible VFX with Nuke today