It’s a warm, summer’s day in Los Angeles. A long dusty street emerges from the desert and into the hustle and bustle of 1930s America. Better-known as Wilshire Boulevard, an old-fashioned car drives down the road.

At first glance, it’s hard to believe that what we’re seeing is not truly a shot from the Golden era of Hollywood. Instead, we’re witnessing the work of Territory Studio and their reimagining of Wilshire Boulevard in Netflix’s Mank.

Tasked with creating this fully CG rear-projection, Territory Studio turned to Virtual Production and Nuke which proved to be the perfect combination for the job. We caught up with Simon Carr, VFX Supervisor, and Ben Hicks, Lead Nuke Artist on Mank, to uncover just how they used this method to produce the old-fashioned scenescape.

Starting with reference footage of 1930s Wilshire Boulevard, Simon and his team had everything they needed to begin recreating the road.

“By endlessly interrogating this clip,” Simon explains, “we were able to cross-reference with old photographs and maps to work out which buildings and establishments would have lined the Boulevard at that time, and we gradually built that detail up.”

Territory Studio was also able to use parts of modern LA to influence their CG sequence. In a fitting tribute, they used the same film-stock used on Citizen Kane to capture photographic references, and used these to set the look of their black and white LUT—this acted as a guide for how the monochrome needed to look in the final picture. 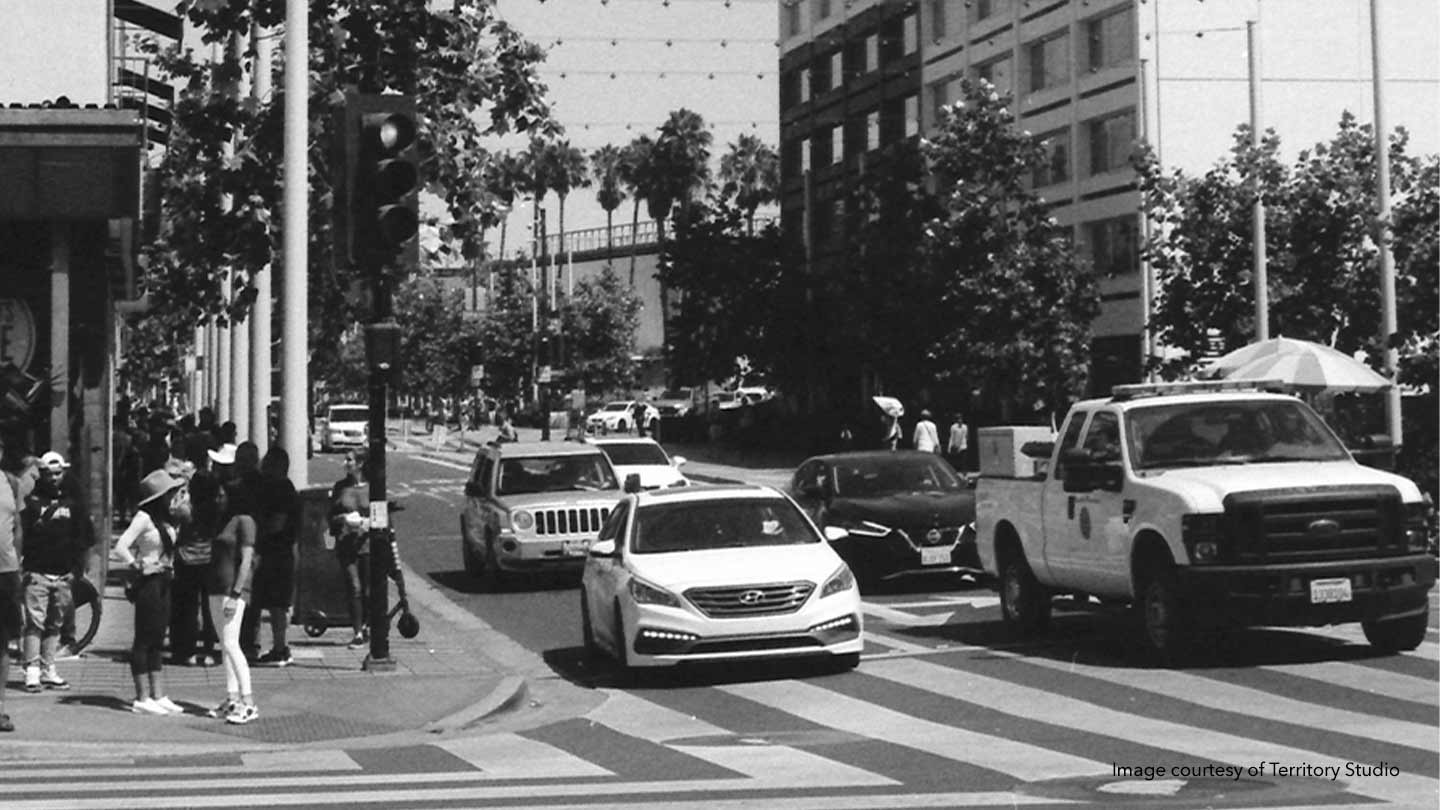 The one difference with this project was that the CG street would be used as a backdrop on an LED screen. This meant that Simon and the team had to work ahead of the shoot, rather than delivering the plates once filming had finished. This was also Simon’s first project using an LED volume.

“There has been a real upturn in productions looking to use the technology as the panels have improved. As the film was shot monochrome, though, the traditional green/blue screen approach was not feasible. So, the driving scenes and a few others were achieved in this way,” Simon tells us.

Needing to complete the backdrop ahead of the shoot meant that the team had a definite deadline that could not be moved. The sequence was pushed as late as possible in the schedule to give Territory Studio enough time to build and perfect the sequence. 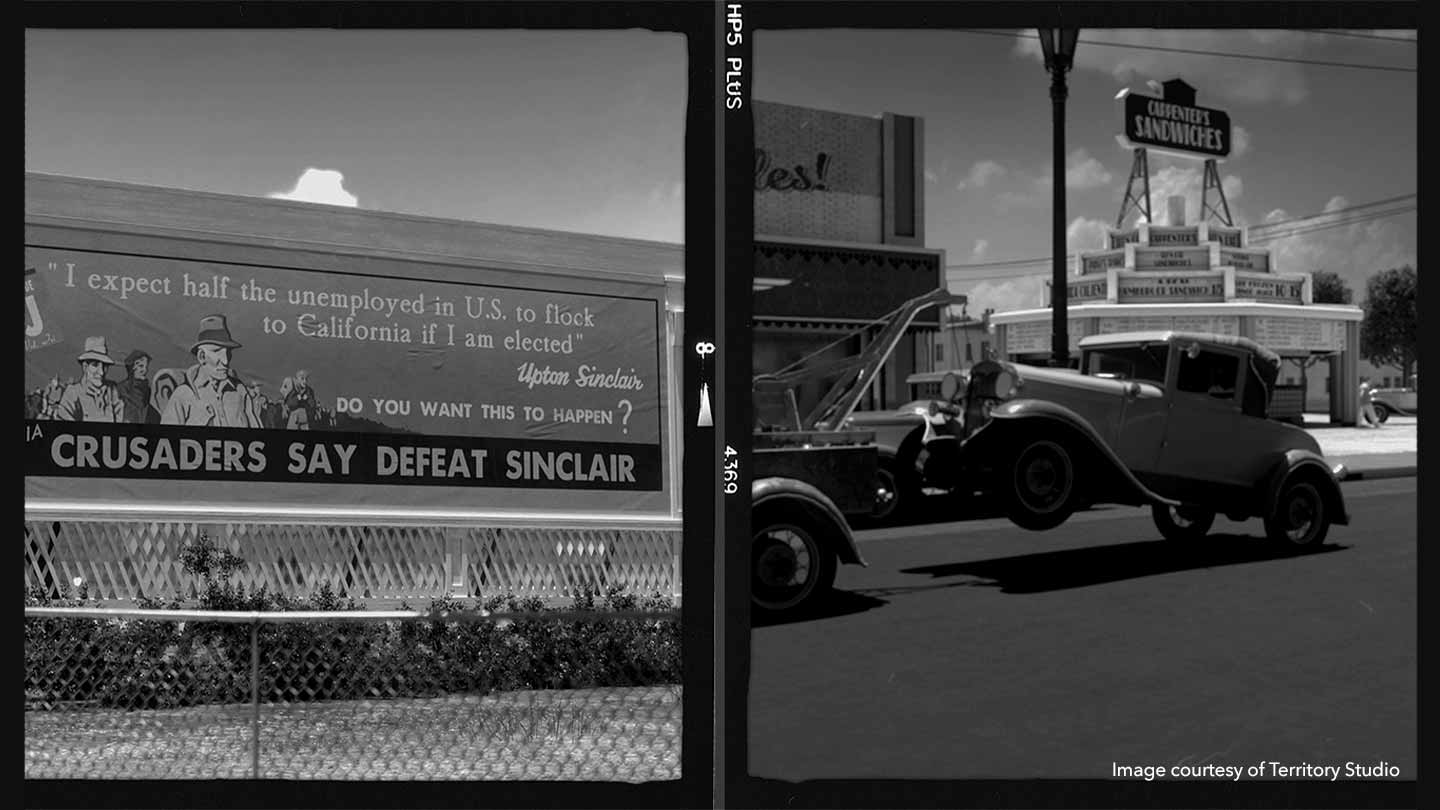 The long road ahead

The deadline also had an impact on Ben Hicks, Lead Nuke Artist on Mank, and the compositing work that was needed. With roughly eight weeks to complete the sequence, the team had their work cut out for them. Luckily they had Foundry’s own Nuke to help them tackle their workload from previs to final delivery.

“Nuke was used at every stage of this project,” Ben tells us. “Our initial slap comps helped us determine what additional matte painting work and elements were required. We extensively used the 3D and particle toolsets to help create and add extra elements to the shots. Plus, Nuke enabled us to bring all these separate elements together and ultimately to polish and finish the shots.” 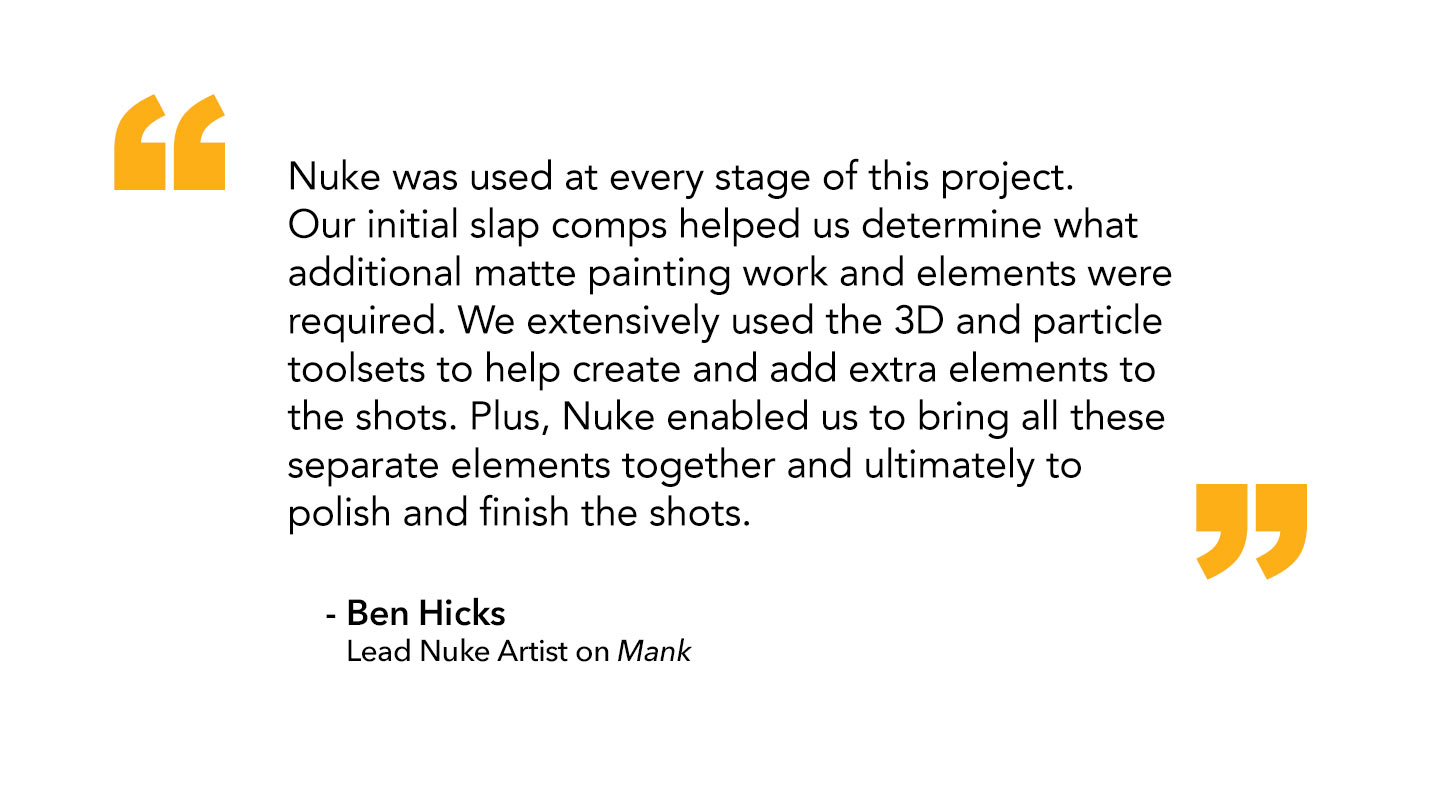 Aiming to supply the comp team with renders of the sequence every few days, the 3D team had to work extra hard to ensure that everything was textured. There were also regular matte painting updates and additional elements from their 2D artists. Ben quickly realized that the main problem was managing all these updates, whilst developing the look of the shots and keeping the 2D work progressing smoothly and all alongside managing large sections of the 3D scene that were still being worked on.

It was at this point that Ben decided to create a basic template script in Nuke that could work across the whole sequence. This kept everything organized and allowed Ben to advance the look development work on individual parts of the shots, as and when they were textured and completed by 3D. 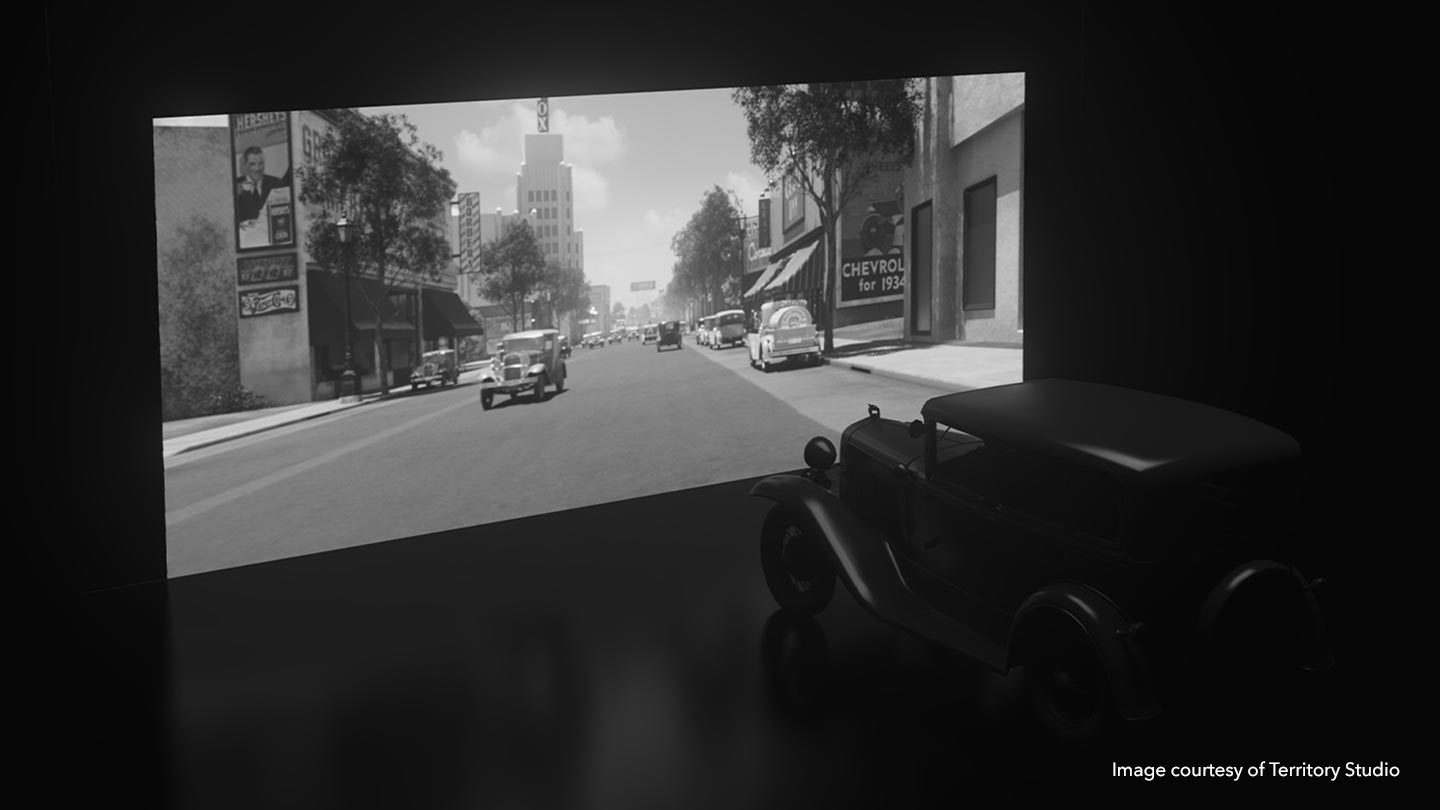 Ben was also on hand to help the 3D department, and alleviate some of their workload by adding extra detail and digital set dressing within Nuke.

“We built multi-dimensional window displays that we could drop into the storefronts of the various buildings along the street,” Ben explains, “because we were effectively working on the whole scene at the same time, we were able to swap in the different shot cameras meaning that the same work could be used in multiple shots across the sequence.”

He goes on: “One of my favorite examples is the Wilshire Fox Theatre. We researched which films would have been showing at that time in 1934 and added the marquee style signage to the front of the cinema. We also managed to find the images of the original movie posters and inserted those onto the billboards outside.”

This level of fine detail is a true testament to Ben and all the artists at Territory Studio. 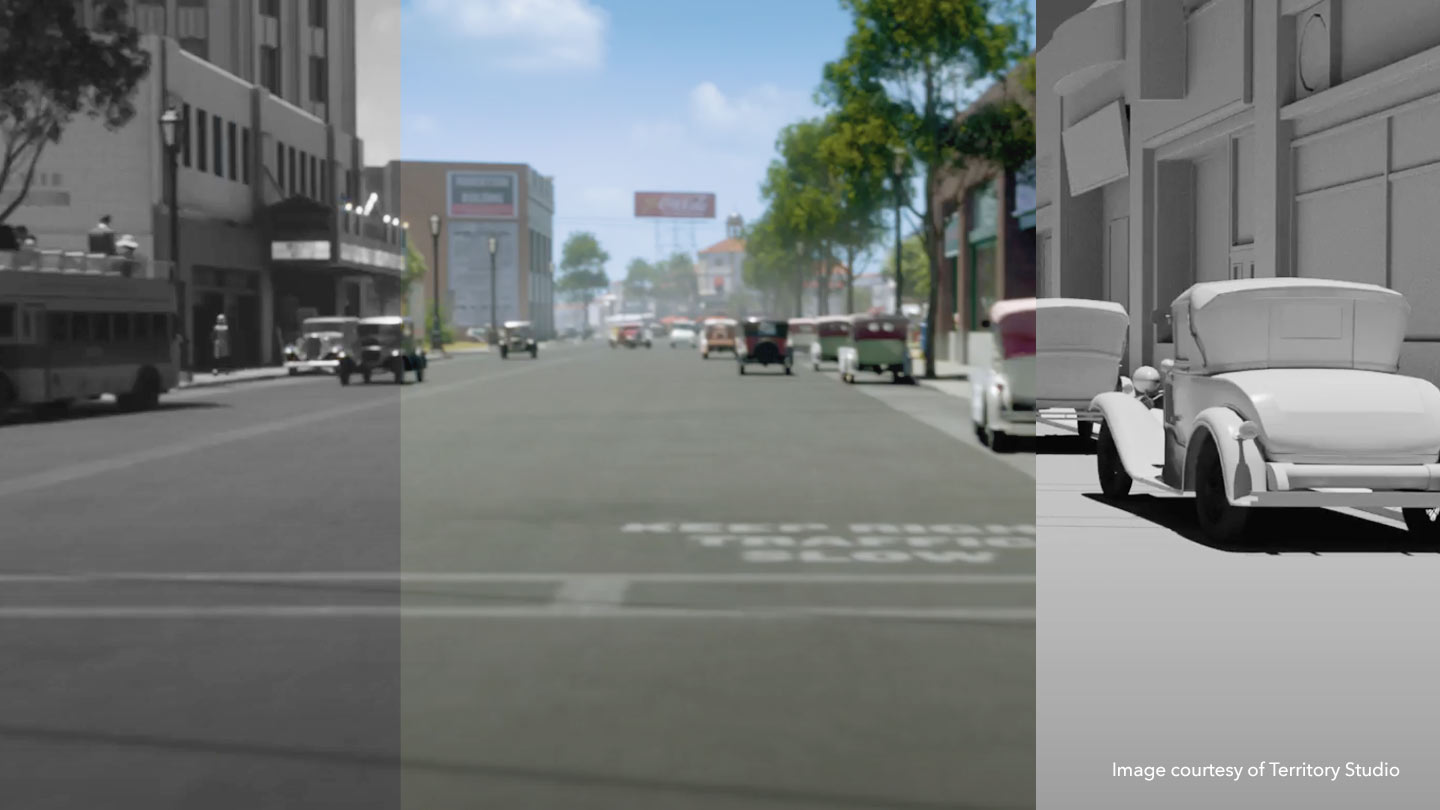 Paving the way with Nuke

Ben and his team also used standalone 3D within Nuke, based on the work they did in previs. This simulated the positions of the LED screens, physical cameras, and the car on set.

By doing this, Ben was able to plug-in their renders and view the screens through the different camera positions. This gave the team a clearer understanding of how things would look on the day of the shoot.

“Although the final film is black and white, we actually worked on our sequence in full color. We had a monochrome viewer LUT so that we could easily switch between both color spaces. A baked-in version of this LUT was also used to create our client deliverables which were also rendered with Nuke via our Shotgun pipeline.”

Territory Studio utilized all aspects of Nuke in order to meet their deadline, and so they could create the most realistic portrayal of Wilshire Boulevard possible. However, one tool that proved to be key to Ben’s work was NukeX’s particle system. 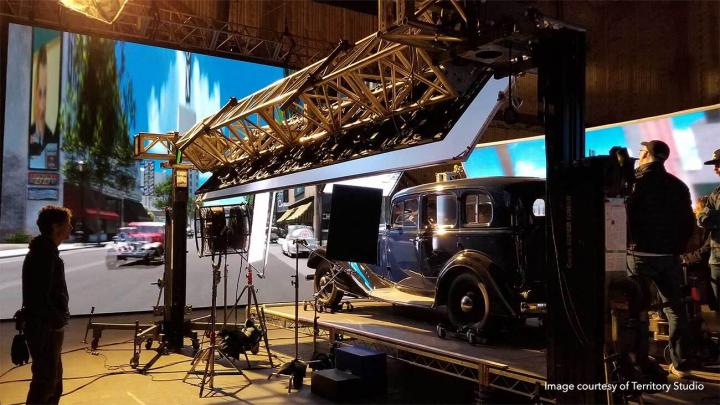 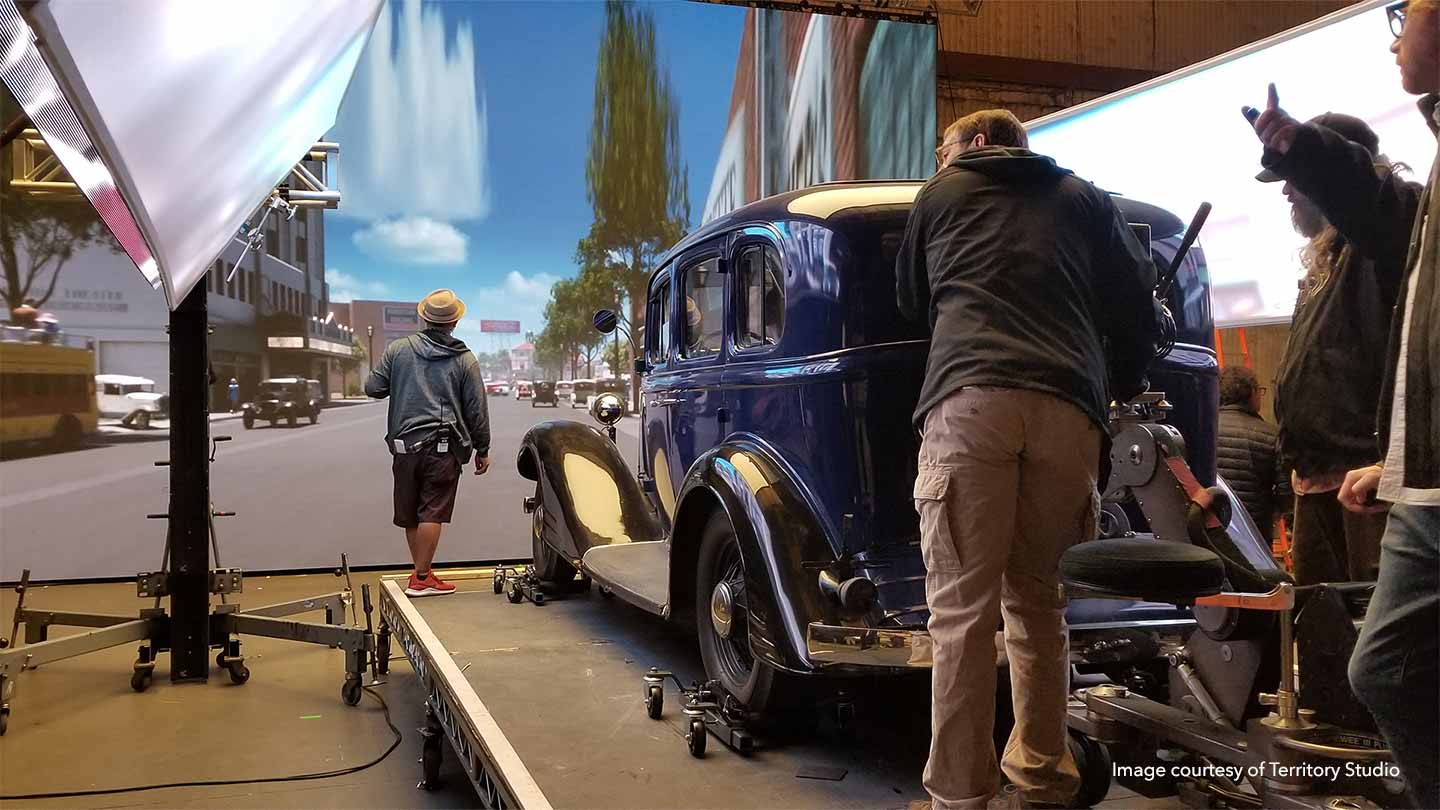 “We used Nuke particles in a number of different ways on this project,” Ben explains. “We created general atmospheric dust elements, added exhaust/tailpipe smoke to the back of certain vehicles, and even used the particle system to drive the heat haze/distortion effect coming off the surface off the road. We also used the particle system to create background trees that sat behind the CG renders. It was such a simple system, but very effective.”

For Ben, the opportunity to use NukeX’s particle system presented a new opportunity and allowed him and his team to perfect the finer details of the sequence.

“I’m quite a big fan of Nuke particles!” He tells us, “as a 2D artist, you are normally working with elements and passes provided by other people, so it is quite refreshing and challenging to try and make perfect particle elements for the shots that I’m working on.”

The devil is in the detail

“I think ultimately that the broad set of tools within Nuke gave us complete control over what we were doing in comp,” Ben tells us. “The ability to jump between the 2D and 3D worlds, generate our own particle passes, and then refine and finish everything within a single piece of software is pretty cool. Some other benefits are the way in which it can be customized and integrated with the rest of our pipeline and of course, being the industry-leading compositing tool, it’s never hard to find artists to come and work with us.”

It is amazing to see just the level of detail that Territory Studio put into this short but poignant scene, and how they successfully created an authentic sequence that transports viewers back to 1930 LA.

Get a 30-day free Nuke trial 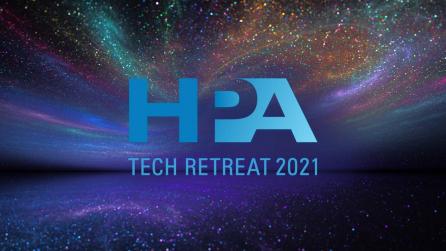 Foundry at HPA: has the traditional VFX pipeline been disrupted for good? 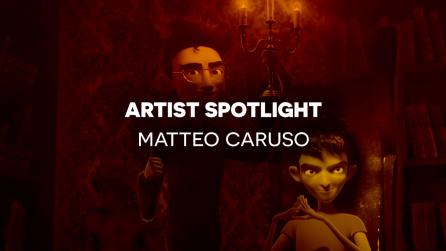