Inspiring the young minds of the future with Framestore

Fifteen years ago, Framestore launched its Launchpad Internship, giving creative young minds a stepping stone into the industry and an opportunity to experience what working in visual effects is truly like.

Unfortunately this year, Framestore couldn’t host its usual internship scheme, and instead had to get creative and run their internship virtually.

“We put our heads together and instead of trying to run a traditional structure, we thought about a competition,” Henry Bull, Head of Recruitment at Framestore, tells us. “We opened up applications to teams of five or six from around the world to get involved and help to create a 30-second short film over an eight-week period [...] it was amazing to see all the films that the students produced and the hard work that went into them.”

2020 hasn’t been easy for anyone, especially for recent graduates looking to make their first steps into employment. But, the young artists in Team Herts didn’t want to sit idly by and binge-watch TV for months like most of us. Instead, they took matters into their own hands and entered Framestore’s competition.

Made up of five graduates from the University of Hertfordshire, Amy Wright, Emily Shordon, Daniel Ravanelli, Patrick Paguio, and Elliott Holland-Crouch—Team Herts went above and beyond to perfect their short film, Behind-the-Scenes. The short 30-second film gives the audience a glimpse into the quick changes and iterations of VFX, seeing a Barbarian character reverse back and forth as the environment and costumes are changed by the Narrator.

We caught up with the talented team to discuss the competition, how they handled the creative process with such a tight deadline and their use of Foundry’s texturing and compositing tools Mari and Nuke.

Like all good productions, the Herts team started with the brief: what would the future of VFX look like? Having such a specific brief meant the team could quickly decide and nail down a concept without wasting too much time getting overwhelmed with an abundance of choices.

“Pretty quickly, we decided we wanted to do something that would take the viewer behind the scenes,” Emily, Rigger, CFX and Team Leader, tells us. “We were inspired by the behind-the-scenes footage of stop-motion films and thought: What if we could combine the physical aspects with all changes being instantaneous? So, the idea of the future of VFX started with that—a virtual CG set where all changes could be made instantaneously.”

But with just eight short weeks to create their film, the pressure was on.

First, the team worked hard to get a story draft locked in. After that, they could turn their attention to their character and start visualizing what he was going to look like—eventually settling on a barbarian character. 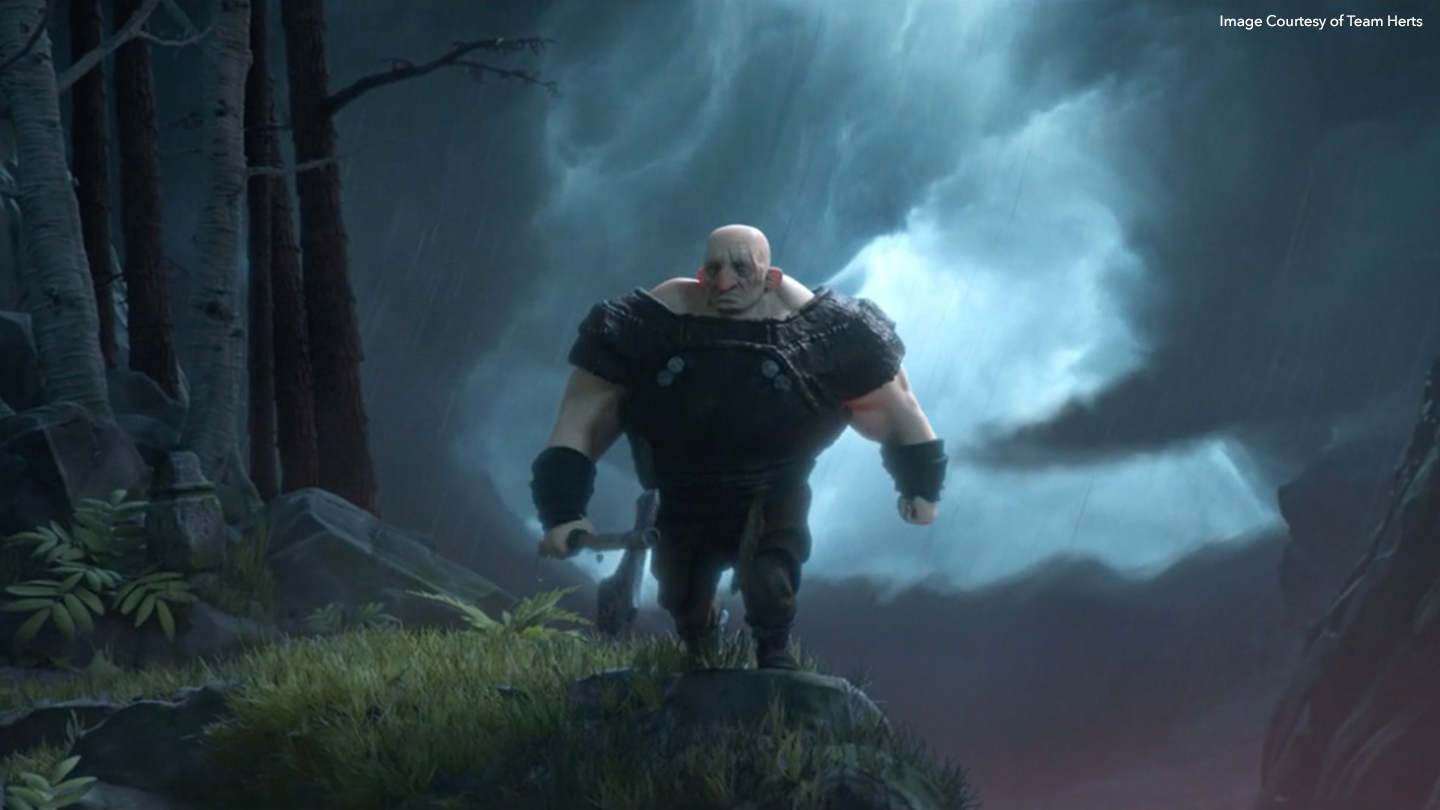 “Framestore put us in touch with Nikola, who is one of their concept artists,” Emily tells us. “He gave us a lot of in-depth advice on character and keeping a consistent design language.”

After a couple of weeks of hard work, Herts had their mid-review and their first experience of the harsh realities of working in the industry. While the team was proud of their first iteration, the mentors gave a lot of robust feedback—something that is common in day-to-day VFX work and shouldn’t be taken to heart.

“The Framestore mentors really wanted us to do our best and were really honest, which we were, and still are, incredibly grateful for. I think one of the most important lessons we took away was: your ideas are not your children, it's okay to throw them in the bin," Emily explains.

With their first review out of the way, the team went back to the drawing board with a new concept in tow—it was time to get creating.

In order to bring their Barbarian character to life, Herts had to ensure that the texturing of the character was realistic, right down to the last tiny detail. To do that they used Foundry’s own look development tool, Mari.

“We chose Mari as our main texturing software because it just gave us the right balance between using techniques and methodologies, as well as [...] artistic freedom,” Patrick Paguio, Texturing, Lookdev and Environment Artist, tells us.

“It’s also easy to work with the node graph workflow and to build up the foundation of textures by structuring it procedurally first. Then you can switch to artistic mode and hand-paint any details [...] that you want to.” 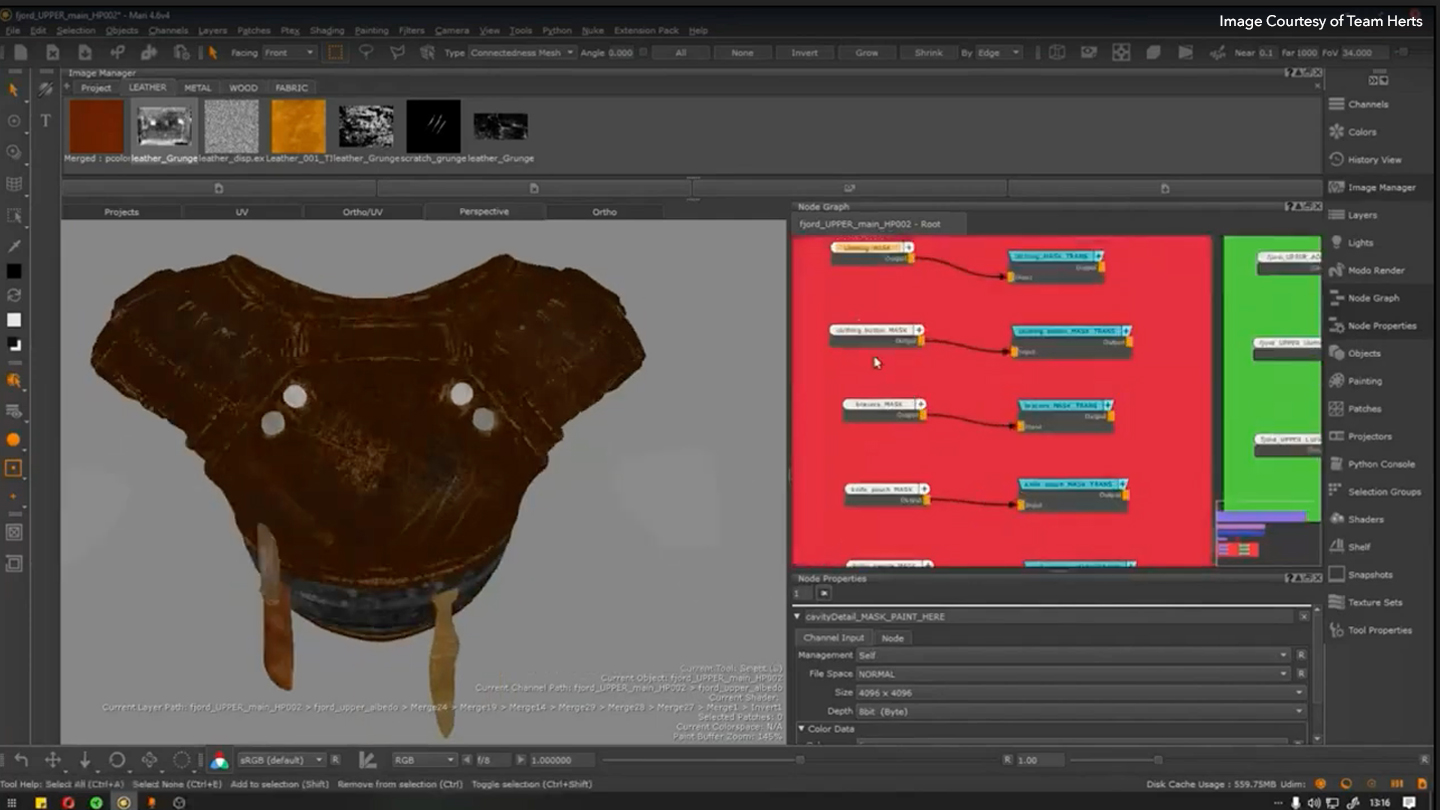 To ensure everything flowed smoothly, Patrick checked the asset's UV's to prevent any distortions or errors while baking their utility maps. By checking and laying out their UV, the team could easily identify parts of their assets during the texturing stage and speed up their process.

Then he prepared his texture images before going into Mari, splitting them into three sets: masks, tile-ables—materials used—and overlays, for breaking out the textures and masks for art directing.

Mari’s non-destructive workload gave Patrick and the team the freedom they needed to be creative, whilst also allowing complete control of their project. Their mask-driven workflow and set-up meant they could easily make changes or implement any feedback given quickly.

During the eight-week competition, the team faced many obstacles and, feeling the pressure of the tight deadline, had to band together to get their film complete. Around four weeks in, the team got a hefty amount of feedback about their project and went back to the drawing board with their script, pushing out continuous iterations until they found something that worked.

Of course, this then had a knock effect on the rest of the project.

“I only had a couple of weeks after locking in the script to finalize all the animation in the film,” Amy, Character and Creature Animator, tells us. “While also being very conscious of the fact that it needed enough time to go through cloth simulation, CFX and shot sculpt afterward, before being sent to render.” 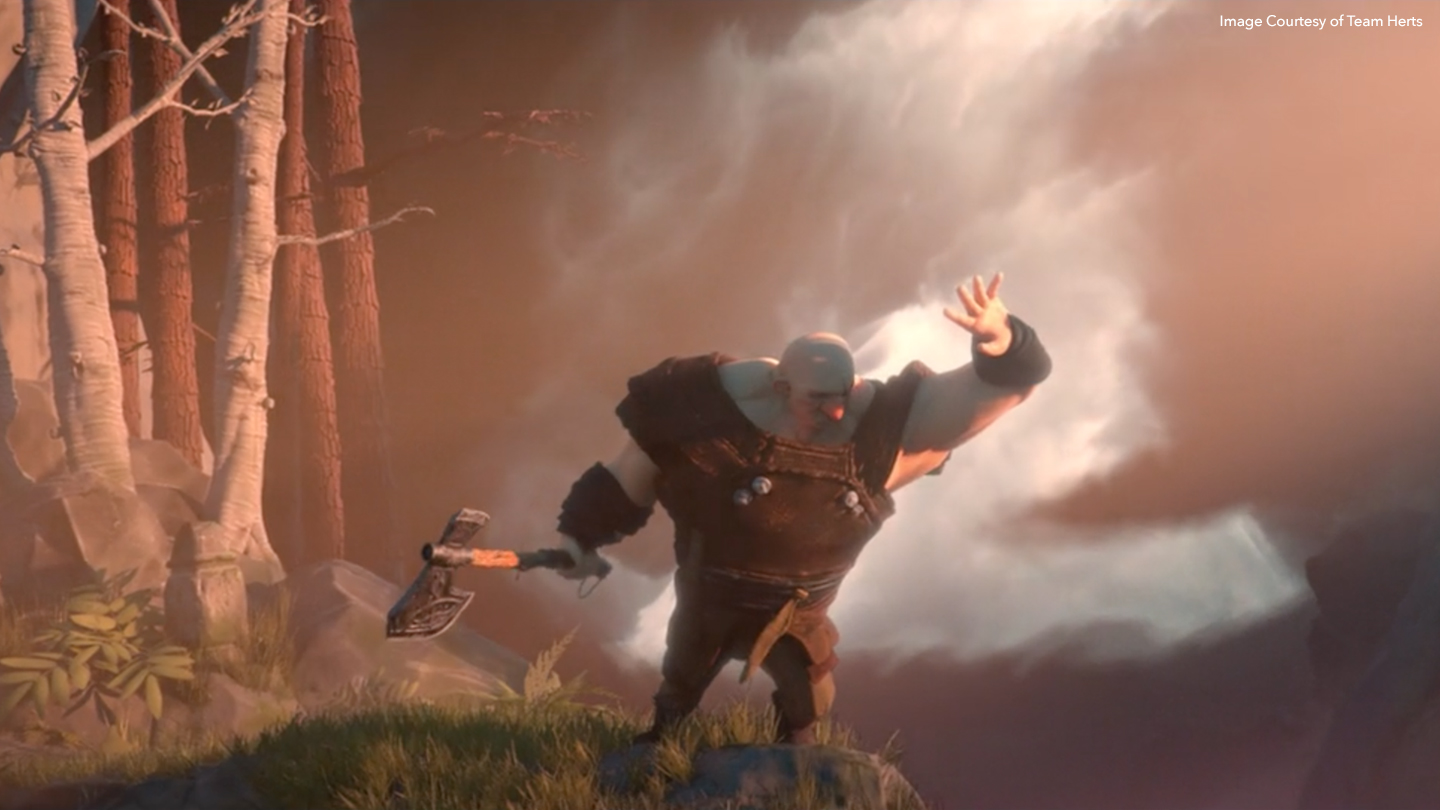 Adding to this mounting pressure was the fact that Amy was the only animator on the team. While it was understandably stressful, it also brought about its merits. Due to the limited number of people on the team, each member had their own specialized part of the pipeline which meant there was one person doing a job that would normally have a whole team of people behind it in a studio setting.

“Structuring our team in this way [...] allowed each member to focus on those areas by themselves, avoiding the technical or communication issues caused by having multiple artists doing the same jobs,” Amy tells us. “With this method, we found that we ended up being much more efficient and had way fewer problems to solve by the end of it.”

In the end, Amy—with the support of her team—managed to complete all the animation in time to finalize their environment.

The environment is an important part of any animation or VFX project and Team Herts wanted to ensure they had the best environment for their short film, which meant a lot of experimenting before settling on stormy weather. 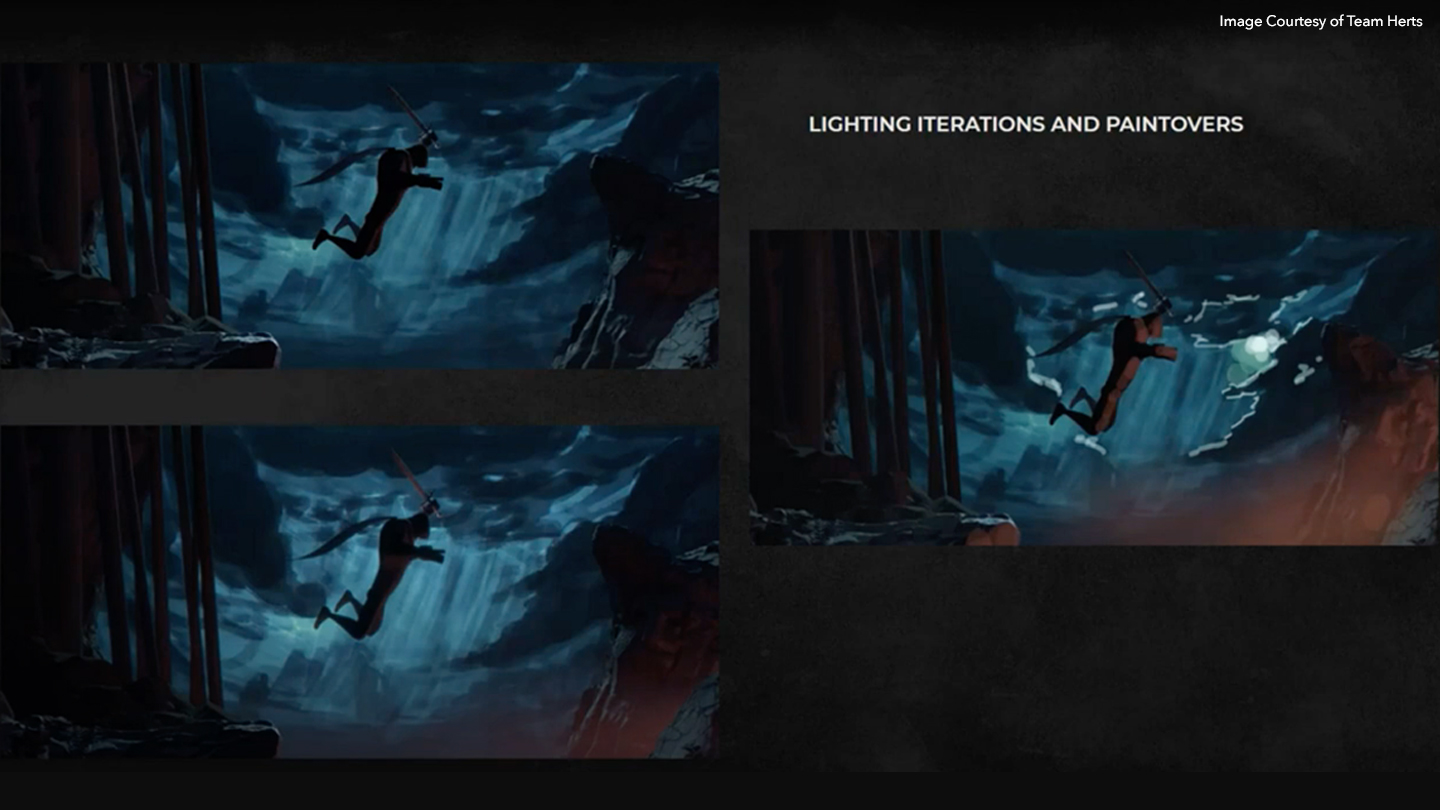 To save time, the team decided on a 2.5D approach for the background environment. Using 3D as a base, Daniel painted on top of it in Photoshop and then projected in Nuke, allowing for some movement in the background, rather than a static background.

Making the different layers in Photoshop, Daniel then assembled everything in Nuke. This workflow allowed him to control the composition and movement of the individual cloud parts which—using Nuke particles—could be combined with the rain and lightning.

“Using Nuke's 3D viewport,” Daniel tells us, “I was able to see what the geometry of the render was to accurately place the sky and rain according to camera and scene, which was really important to make it feel real—especially with the camera moving.“

It’s clear that all the artists in Team Herts have a bright future ahead of them. In fact, all the talented creators that took part in Framestore’s competition do, and it’s exciting to see where their careers will take them.

The team also won this year’s Rookies—adding another string to each of their bows. Whilst the team doesn’t proclaim to be experts on short films, Framestore gave them insight into the world of VFX.

All in all, the internship that Framestore provides is a great stepping stone for young artists, and we’re all hoping that next year it’ll be able to run again as normal. If not, another virtual competition may be in the works. For all the information on Framestore’s Launchpad visit their website, and don’t forget to check out the amazing work from all of this year’s competition winners.

Want to hear more about how Team Herts created their short film? 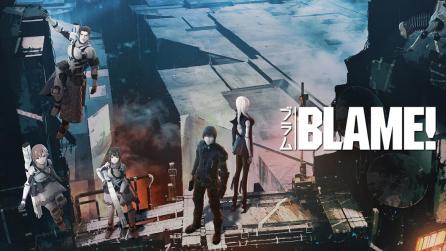 An inside look into Polygon Pictures’ efficient review process 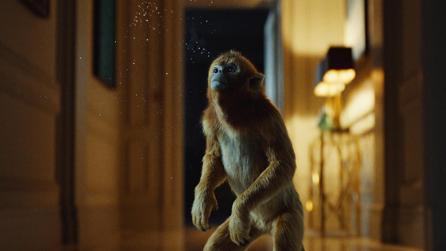 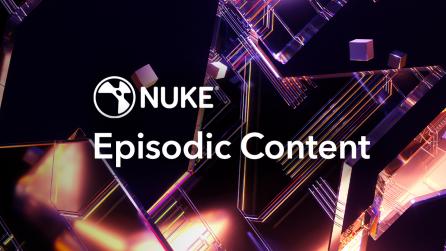