Open Standards will change the VFX Industry as we know it

For years now, the film and TV industry has relied upon collaboration between multiple VFX houses for CG-heavy productions.

With that collaboration comes the problem that software, workflows, and even naming conventions vary between facilities.

Fixing these mismatches adds both time and cost to projects, in a challenging environment in which studio margins are already stretched.

Because of this, a big push started across the industry towards open standards: a set of agreed guidelines and defined requirements to govern key aspects of VFX workflows like color management and data file formats, which is still ongoing.

As Jordan Thistlewood, group product manager for Katana, Mari and Flix at Foundry explains: “By having an open standard, everybody can contribute their development resources towards that, rather than having many different proprietary formats for common data and workflows”.

“It’s the idea that everyone is invested in a common technology that covers all the basics. This philosophy extends through many types of file formats throughout the industry, so everyone contributes to one massive technological pool.”

Open standards also makes the sharing of ideas and technology a lot less messy from a legal point of view, as Group Product Manager for Foundry’s Nuke family of products, Christy Anzelmo, points out: “As VFX projects grow in complexity and more studios collaborate closely, there is a real benefit to having the same technologies available to everyone working on a project.

Open source standards make sharing technologies across studios and vendors much easier, as from a legal and IP protection viewpoint, there is a big difference between me building a piece of tech and granting permission for you to use it, compared to me building a solution and making it open source and freely available.

Once a technology is open source, it’s open to everyone: we can both share and can use it, we can both develop it without complicated legal ownership of the different aspects or new legal agreements needed each time we want to share it with another partner.

That’s where we see a lot of the bigger studios embracing open standards, because they’re  often the ones who have the visibility over production problems and drive to develop these solutions. Making them open source simplifies the whole process of sharing and maintaining this technology.”

For the artists and supervisors on the ground creating the work, open standards can make life a lot easier too, Rob Fanner, engineering manager at Foundry, says: “If it’s not an open standard then everyone rolls their own, and it’s harder for an artist that’s only used to one file format and one way of doing things. They have to re-train.

Also, you can’t easily share assets - if you’re in a pinch and you need to ramp up your production and bring other people or companies onboard to help out, you’re stuck because you can’t share assets between them.

Ultimately, it makes it all the more efficient: the studios are all really pressed for efficiency and for cost and time - so this is a big thing.”

Adam Cherbetji, lead engineer at Foundry, takes up this point: “Basically when it’s not an open standard for things to move between different departments there are conversion processes  required, and that slows everything down.”

“It slows everything down and also the conversion processes are imprecise,'' adds Rob.

“You lose stuff and if you’re not using high-quality software you can’t always make the conversion process robust”.

The development of new and creative solutions is part and parcel of being in an industry filled with passionate, inventive people.

A collaborative ethos of open sourcing technology is both admirable and beneficial for the VFX industry.

But complications can arise when there’s no benchmark by which to measure the quality of these solutions, and no professional body to maintain an official version.

“With no guidelines, and often little resource dedicated to reviewing and accepting updates, the standard can become stagnant or be forked into many different versions which can dilute the value of the standard”, Christy says.

She highlights that this has increasingly led to a more committee-driven approach, with organizations like the Academy Software Foundation (ASWF) taking the reins.

Three years ago, Head of ILM, Rob Bredow, and President and Founder of RFX Inc, Ray Feeney, were talking at an Academy Sci-Tech meeting.

The two are members of the Sci-Tech Awards Committee of the Academy of Motion Pictures Arts & Sciences, and the conversation was about the challenges of maintaining a healthy open source ecosystem - even with such well-intentioned contributors across the industry.

Bredow is well-acquainted with these challenges, having been at Sony Pictures Imageworks (SPI) at a time when they were developing open source technologies like OCIO and Alembic, and at ILM for the development of MaterialX and OpenEXR.

It was clear to both that addressing them would be key to the success of the VFX industry in the future, for one simple reason: open source software is the lifeblood of Hollywood VFX.

Of the 200 most popular movies of all time, the top 137 were either visual-effects driven or animated - and a significant number of those were made using open source software.

From that initial conversation, after much consultation with interested parties (and a two-year investigation which found that more than 80% of the industry uses open source software), the ASWF was born.

The ASWF is where the developers and companies active in the open source community can collaborate and innovate on standardized open source tech for the motion picture and broader media industries. Once a project has been accepted by the ASWF, a base standard level can be set for it, and additional resources can be provided to maintain it and develop it.

Its members include some of the most eminent software companies and studios working in the industry today: the likes of Weta Digital, DreamWorks and DNEG. Foundry is also a member, with Phil Parsonage, our chief engineering officer, serving on the governing board.

“They represent industry interests overall - not one specific studio or software company. So they can be more objective”, Christy explains.

“Having this body which is both reputable and knowledgeable, that’s really making an effort to define the development processes and the baseline quality required of a standard- that’s invaluable.”

“Now, when open source projects reach a certain maturity they can move over to the Academy, who will help maintain quality, encourage adoption, and make sure that the standards we all care about are nurtured and keep advancing.”

Some of the first standards to be accepted into the ASWF include OpenColorIO (OCIO), a complete color management solution; and OpenVDB, an Academy Award-winning open-source C++ library for the efficient storage and manipulation of volumetric data.

“Having standards like OCIO within the ASWF is really fantastic,'' says Christy.

“OCIO is a powerful solution for color management and is nearly ubiquitous. Having this in the ASWF is quite a positive sign: people have seen the value of open standards like OCIO: studios and vendors all want to take advantage of these, and it’s clear the need for management, continuing development, and investment has been understood. The industry is investing in the standards we all use, because if we don’t, it’s unlikely we will realise the full benefits of having these standards in the first place.”

It’s still early days for the ASWF (the foundation was only created in August 2018), and there are some important technologies out there that have not yet been brought under its wing.

These may eventually end up under its remit in the future, and include OpenSubDiv, Universal Scene Description (USD) and OpenTimelineIO (OTIO) - projects created at Pixar, one of the  companies that have been pivotal in the open source community along with the likes of SPI and ILM. 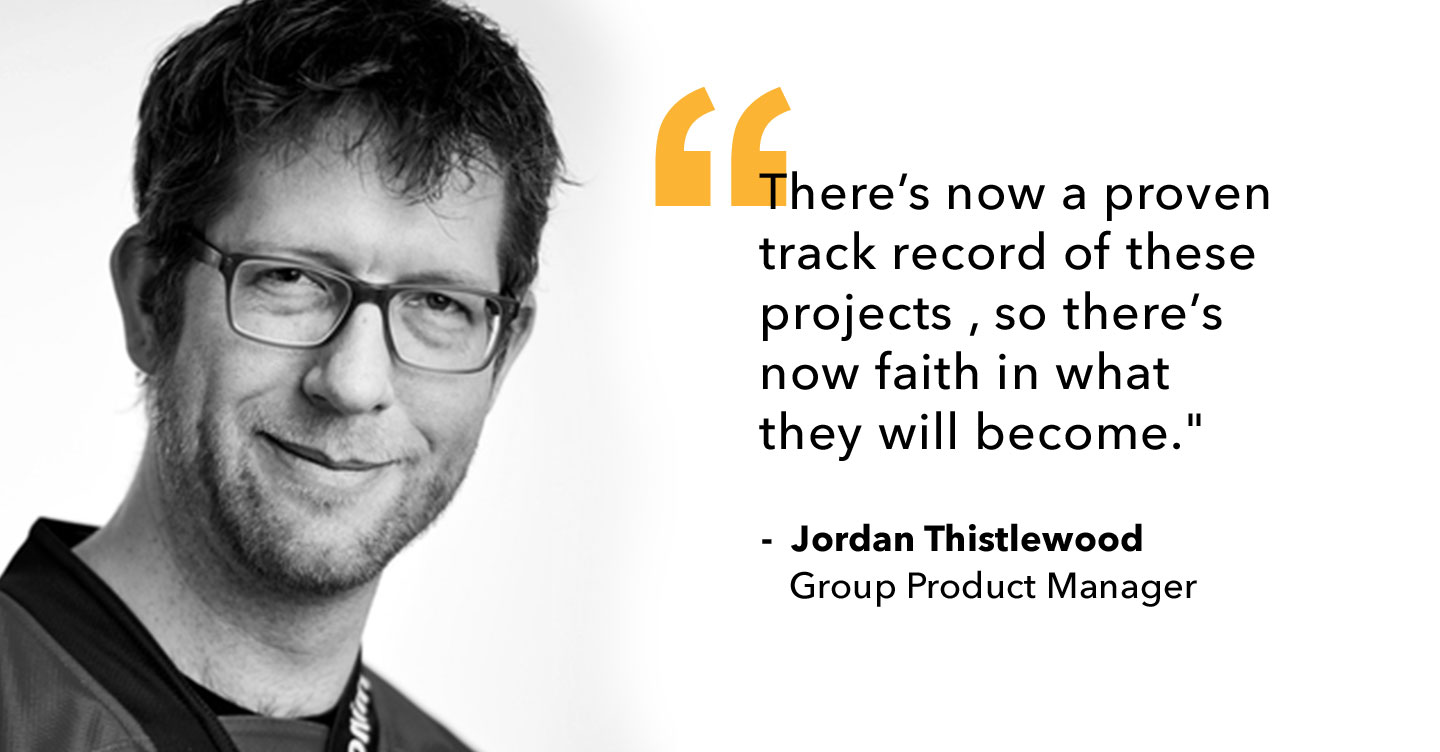 The ASWF is just one of the regulating bodies that maintains standards. Another key organization in this space is the VFX Reference Platform, set up by the Visual Effects Society (VES).

Initially focused on Linux only, the VFX Reference Platform is a set of tools and library versions to be used as a common target platform for building software for the VFX industry.

It includes libraries for Python, OpenEXR, ACES, Alembic and many more, and is updated on an annual basis. Chief engineering officer Phil Parsonage represents Foundry at this organization also.

As Christy points out: “The projects that end up in collectives and reference platforms are those that are mature, established and used frequently, often across platforms or stages of the pipeline.

For Foundry, bodies like VFX Reference Platform make it much easier to manage compatibility between our tools and other software, because there is less ambiguity over which versions of standards will be used and when they are likely to be implemented.“ 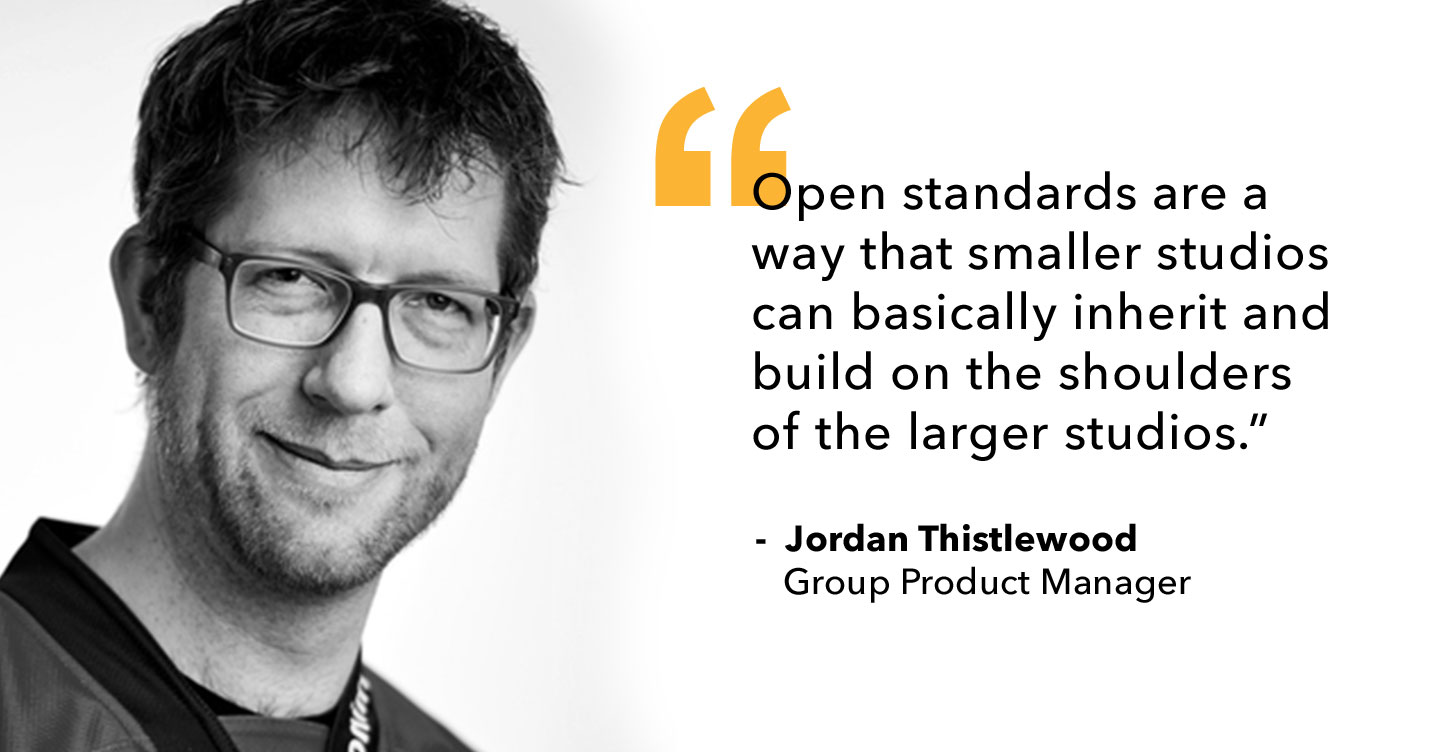 A boon for both studios and software developers

The open standards are a way that smaller studios can basically inherit and build on the shoulders of the larger studios that break trails into new areas.”

And for software developers like Foundry, open standards means enabling clients to build the pipeline they need, Jordan explains: “By supporting open standards, we’re facilitating our clients in their drive to customize and build a better pipeline.

If we add proprietary closed formats, they won’t really be able to do that, and we’d make their wishes to build those better pipelines even harder, which is really against our company philosophy. We really do want to partner with our clients and help them build up the best pipelines.”

Christy highlights that initiatives like open standards are beneficial for all players in the industry: “Consistency between products. connecting your pipelines together, companies being able to co-develop and share technology more easily... open standards enable all of these.

Jordan is quick to back this up: “They’ve proven to be very valuable. I think we are seeing more and more people moving away from closed standards to open standards, and there’s now a proven track record of these projects , so there’s now faith in what they will become.

“There has been much more interest in things like USD, out of the gate, than I think there were with Alembic and EXR, and those have become mainstays in the industry. I think people now understand what the trajectory is and what it means.”

Going forward, Foundry are looking to play a greater part in this area: “We’re hoping to become a more visible contributor to open source”, Robert says. “Our intention going forward is to be much more active in the open source community”.