Fast becoming the content of choice across our screens and streams, animated productions give artists the perfect platform to fully flex their creative muscles. Whole new CG worlds, characters and creatures can be created entirely from scratch, supported by tools that work to perfectly capture the overall artistic vision.

Yet the creative process that underpins animation is caveated by one large factor: rendering. Feature-length animated productions can incur huge render time and budget costs. Famously, Pixar’s Monsters University took four years to make, with a single frame taking 29 hours to render even with a data centre made up of 2000 computers and 24,000 cores to shoulder the work.

It’s pivotal, then, that teams and artists use tools that can facilitate refined, creative decision making and handle corrections with ease and efficiency, to minimise re-rendering, while retaining full creative control.

Enter compositing tool Nuke: tailored toward supporting the decision-making process in animation production, making a studio more efficient by helping refine their creative choices and offsetting the risk of re-rendering.

Nuke is a powerful image processing engine, offering artists very fine-grained control in a node-based, non-destructive workflow. Using Nuke in animation, artists can iterate faster, saving them time to make better pictures, whilst saving studios money as more work can be done in a shorter amount of time.

These same benefits were felt by the Sony Pictures Imageworks team when creating the unique, comic-book style that defines Spiderman: Into the Spider-Verse, wherein features like BlinkScript were used to quickly prototype tools in Nuke and achieve multiple looks on the show via artist-facing gizmos or templates.

The cost of re-rendering

Both David and Anna are no strangers to the challenges of CG rendering, marked by two overarching factors: money and time.

“Rendering CG is expensive,” David Nolan comments. “It's probably the biggest cost that an animation or visual effects facility will have outside of staffing, because it takes a huge amount of machine time. And often you may not have enough machines to render on, so you'll have to go to the cloud and that is also typically very expensive.”

Speaking of scheduling, he continues: “If it takes eight hours to render a frame and your shot is 200 frames long, that's a huge amount of time—real time and machine time—that you need to spend to see the results of the changes you made. You’ve probably got hundreds of shots, all competing for rendering resources, so you can probably only do one render a night for that shot. An artist will work on the shot, kick it off rendering overnight, and the next morning is when they’ll know whether it’s good or not.”

Clearly rendering is an essential part of the animation process, but it’s also extremely expensive in both time and money. Whilst it’s therefore best to avoid re-rendering, iterative workflow is an inevitable part of the creative process on animated productions as artistic freedom and exploration take precedence. Happily, Nuke is designed to facilitate fast iterations and on-the-fly changes, reducing the need to re-render to iron out mistakes and corrections. 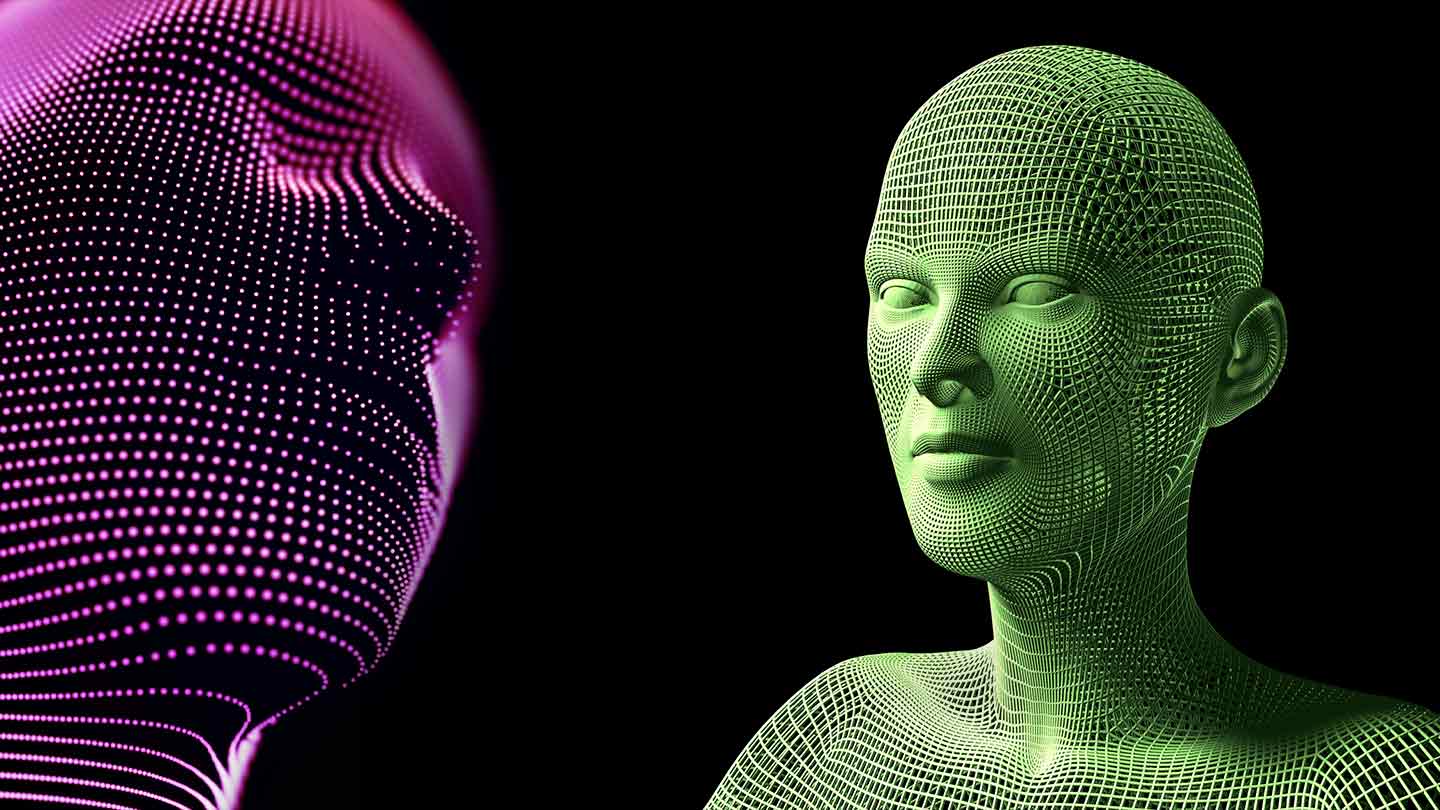 “A creative process like animation is all about iterations,” David comments. “The more versions you can do, the more you can refine the look and get closer to the creative vision. If you’re limited to CG rendering, each iteration can take a long time. It’s in the composite, where you can really iterate and refine the look. Using Nuke, artists can do ten different versions of a shot over the course of a day, while you'd only get one version of that shot if you were only using a 3D renderer.”

Anna Samuel builds on this point. “Nuke allows a degree of flexibility with clients as well,” she comments. “If the client suddenly says, I don't want this robot to be green, I want it to be red, instead of having to re-render and wait another eight hours, the compositor can instead make the change immediately.”

Using the power of Nuke, artists can make changes to renders using different AOVs (Arbitrary Output Variables) and offset the need to re-render. AOVs allow image and utility data to be output during render calculations to provide additional options during compositing.

They store different layers of image data, itself representing various information about the picture as part of a 3D scene. Artists can use AOVs for very fine-grained control over all of the different elements that are happening in any one render, whether that be rendering shadows separately from a CG creature, or the exact depth of a scene. ID mattes, such as Cryptomattes, are an example of an AOV which can be generated at render time, enabling for localised colour corrections and image manipulation to be applied.

“Nuke lays everything out for you and gives you access to this data very easily and efficiently,” David comments. “You could, for example, render each of your lights as a separate AOV. Later, in comp, you can dial this light up and that light down, and effectively relight the shot without having to re-render and spend eight hours a frame to do that.”

These same benefits were felt by the DIGIC team when creating the flawless CG launch trailer for Assassin’s Creed: Valhalla. As Péter Hostyánszki, Lighting and Compositing Supervisor, explains in a previous case study: “Look development takes place during the first phase of film production where Nuke plays an essential role. It helps us to be flexible and agile by quickly iterating through various looks and moods.” 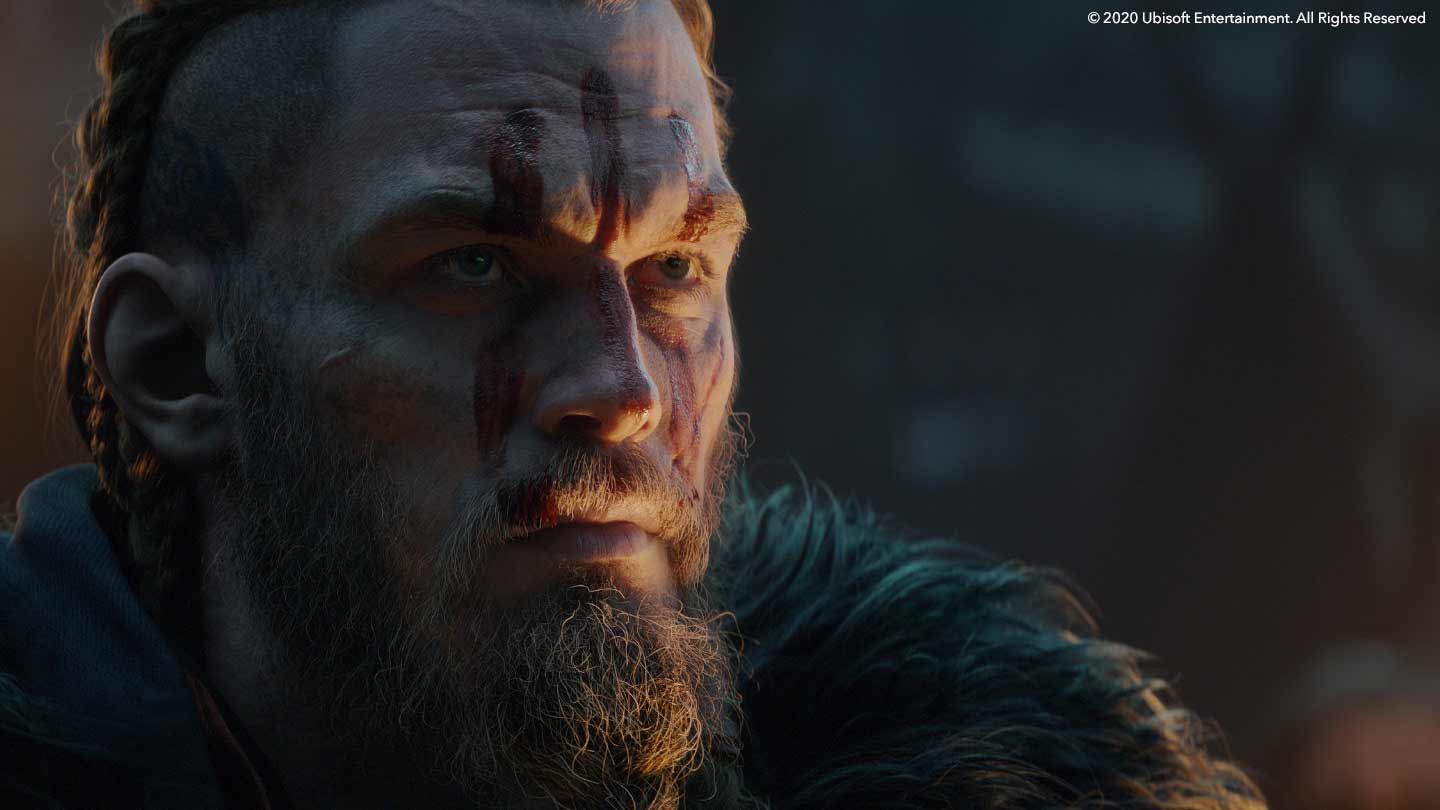 In this instance, using AOVs in Nuke let the team quickly iterate on a look, without multiple rounds of re-rendering. Speaking to this, Péter continues: “When the desired look is approved, we push these lighting changes back into the 3D scenes and give feedback to asset divisions if needed.”

Harnessing the power of set extensions and matte painting

The creation of whole new worlds—across both animation and live action—can drain a studio’s time and resource. To offset this, set extensions and matte painting are often used to avoid rendering every element in the background of a scene. Whilst this is a technique more common to visual effects, it's something that can be used in animation studios, facilitated by Nuke.

“If you have, for example, a shot in your animated film with three mountains in the background—all of which have trees and snow on them—alongside birds and clouds, rendering this in a 3D package would be a huge amount of work, and very time consuming,” David comments. 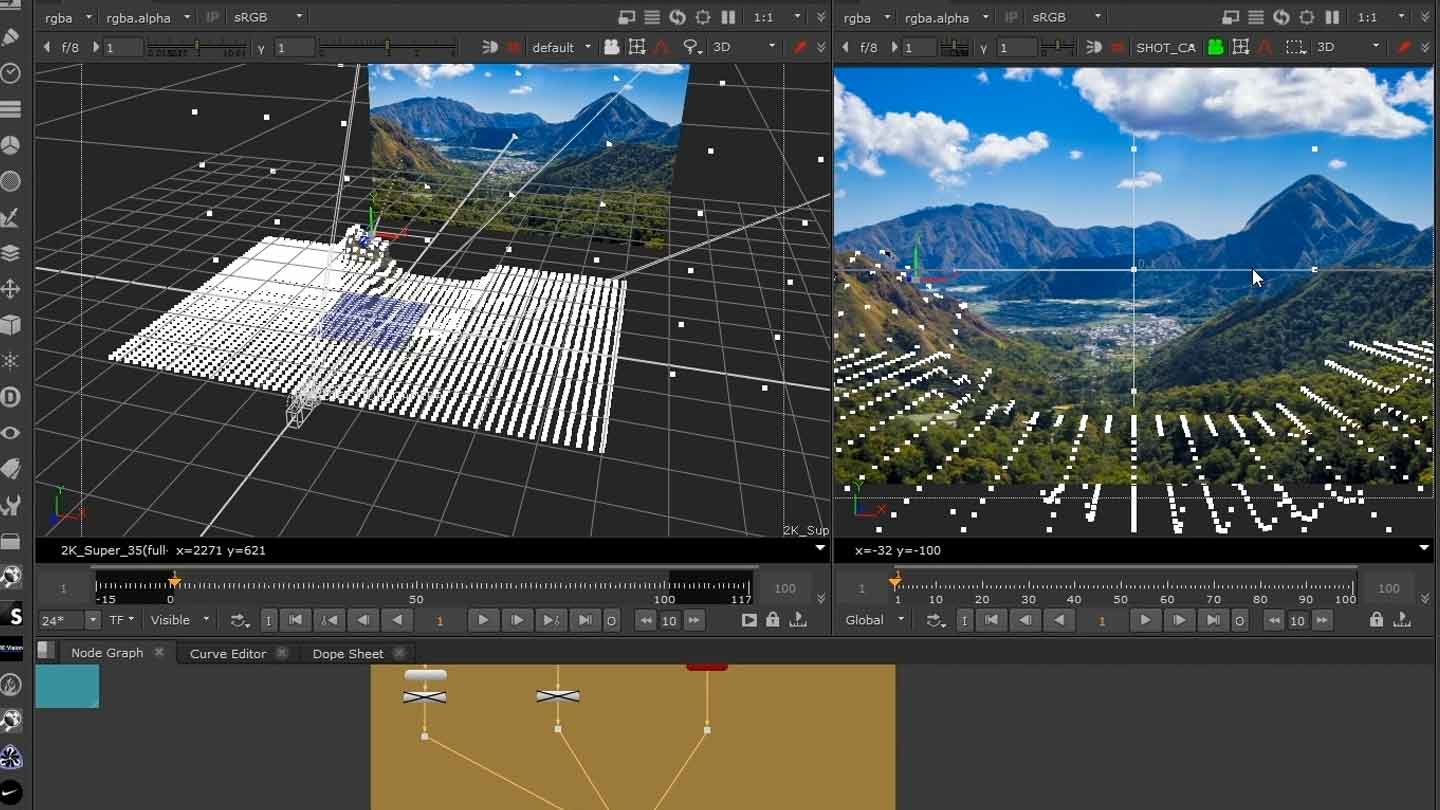 Speaking of matte painting, David continues:  “What you can do is take 2D images that already exist, so you don't have to create these yourself. You can photograph something and then use Nuke's 3D system to place it in 3D space. Then you can create a background at a similar level of complexity—maybe even more complex because it's real—without having to invest huge amounts of an artist’s time in generating this synthetically. You still have to spend time building it, but it's a much simpler build and it’s much faster to render.”

Needless to say, building this scene in Nuke gives artists access to all of Nuke’s powerful tools, enabling a huge degree of control to fix mistakes and making corrections on the fly without needing to render the whole scene again.

Nuke: your tool for tackling animation

Nuke’s non-destructive workflow, powered by its node graph, accelerates the speed at which artists can iterate even more. Anna explains: “Typically, when you make changes in a DCC—say, adding a paint stroke—followed by several other steps, there’s a lengthy process to undo that same stroke. You would have to edit, undo, edit, undo, until you get back to the point in the timeline before the mistake was made.”

“In Nuke, however, you could find that exact incorrect paint stroke, delete it, change it and so on, without affecting the rest of the image. It's not a linear workflow, and you can work in whatever order, which facilitates creativity for artists.”

This workflow is supported by features like Smart Vectors and Nuke’s robust 3D system, allowing artists to work in a true 3D space. With a focus on providing fine-grained creative control, Nuke’s feature list is tailored toward managing renders as part of the animation process.

“If you’ve got an area of your render that the director has changed their mind on, you don’t necessarily need to re-render, you could paint that out,” David comments. “You can replace that. There's a whole suite of tools that Nuke provides that are very, very good at fixing images, allowing you to make changes directly in the comp.” 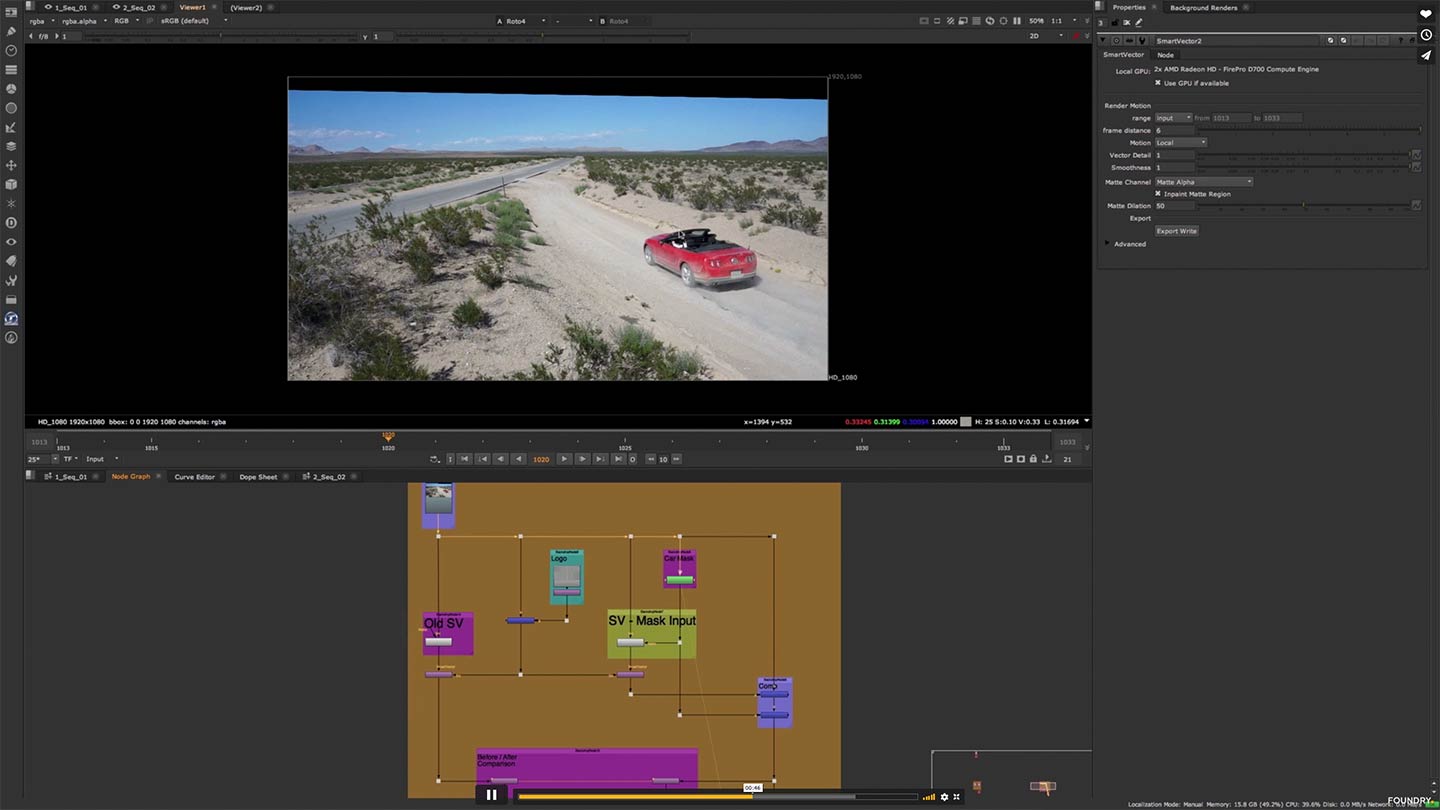 David highlights Nuke’s Particle System here as another essential facet in an artist’s toolkit that speeds up the creative process: “Using Particles, you can do quick add-ons and things like dust hits and spark elements, quickly and cheaply. Fully simulating these in another package then rendering them out is a lot more time consuming and expensive. With Nuke, if you want to have some dust falling, or something simple just to augment the shot and add a little bit more detail, you can do this right away.”

As an image processing engine, Nuke consumes data from other applications and exposes this same data to artists with the maximum amount of control and flexibility to make the changes needed quickly, efficiently and non-destructively.

The result: increased efficiency and a heightened sense of creativity to arm artists with the means to tackle today’s most demanding CG animated projects.

Want to learn more about animation? 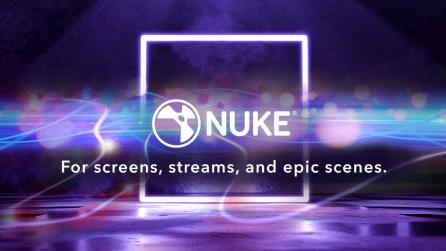 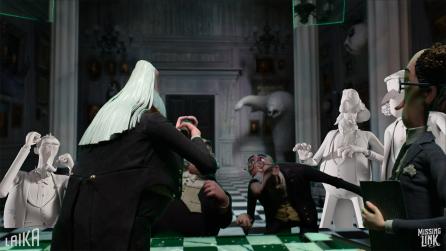 Discover Why Nuke Is Used In Animation