We recently wrote about how studios in Eastern Europe are taking bold and creative decisions to create stunning work - often of a quality to rival the big, Hollywood VFX houses.

One such outfit is the Ukraine-based Animagrad. Formed in 2012, this innovative studio has grown from a team of around 10 generalists to 100 specialists, focusing on high-quality animation.

With the team swelling size, they’ve been able to take on bigger projects, moving from TV episodics to their first full-blown feature animation film, The Stolen Princess.

The Stolen Princess features a classic fairytale plot (a beautiful princess, abducted by an evil wizard, saved by a dashing hero), coupled with animation so good it could have come straight out of Hollywood. It’s a tour de force in terms of both creative vision and execution.

Perhaps even more remarkable, however, is how this stunning body of work came to fruition.

As Andrew Militskiy, CTO at Animagrad explains: “Originally we built our pipeline for the lighting and look dev around a prominent 3D animation tool, and we faced several issues with that.”

“In our pipeline, the program couldn’t handle the complexity of the jobs we wanted it to do, and would constantly crash. Loading big scenes… maybe 50-70% would crash, and if they didn’t crash, they would take 60 mins just to load up. It was incredibly cumbersome (and frustrating) to work with.”

It became such a problem that the team were forced to consider an extraordinary step - swapping out their look dev and lighting toolset mid-way through the project.

A highly unusual move, the cost and time implications of this would normally rule out such a risky course of action.

As it turned out, however, the team did not take much convincing. It was a no-brainer, as Andrew explains: “The way we were working before, we began to realize we would never hit the deadline - it was impossible. We felt we’d need at least another year extension, because of how complex the sets were and how much our other tool was crashing.”

It turned out that in the end, Animagrad couldn’t afford not to change.

Getting on the right track

When the team set about researching new look dev and lighting solutions, Andrew had heard about Katana and suggested they look into it: “So they were like, ‘OK, we’ll test it...’”, he says.

“And when we did, we realised that it was actually going to be a Godsend. Once we started using it, we couldn’t believe it…  ‘wow, it renders a sphere!’, ‘wow, it renders volumetrics!’... OK,  we can actually do everything that we’ve been trying to do using this!”

Initially, the team had been a little sceptical when Andrew suggested Katana. Wasn’t Katana just something that big studios use? Unbeknownst to them, the things they had been trying to do unsuccessfully in the first place with their previous pipeline configuration - setting up their shots in different types of lighting, grouping them together and rendering it all out - is what Katana was designed to do from the start.

“Once we finally got the trial version, and everyone was sitting in front of it thinking,’ this is a really unknown beast’, no one was really sure they’d be able to learn it. The UI is different, the way of working is different - so everyone was still kind of apprehensive - until they started playing with it.”

“And then, as I said, someone rendered out a little sphere, and everyone was like ‘oh my God, how did you do that?’, and he’s taught everyone else how to render a sphere.”

“Then someone rendered something else - a pony I think, and she’s taught everybody how to do that… and so it created a real buzz across the team, where everyone was teaching each other new tricks.”

“Then within a month, we knew that this was going to save our asses. Because now, everything is working, it’s stable, it’s fast.” 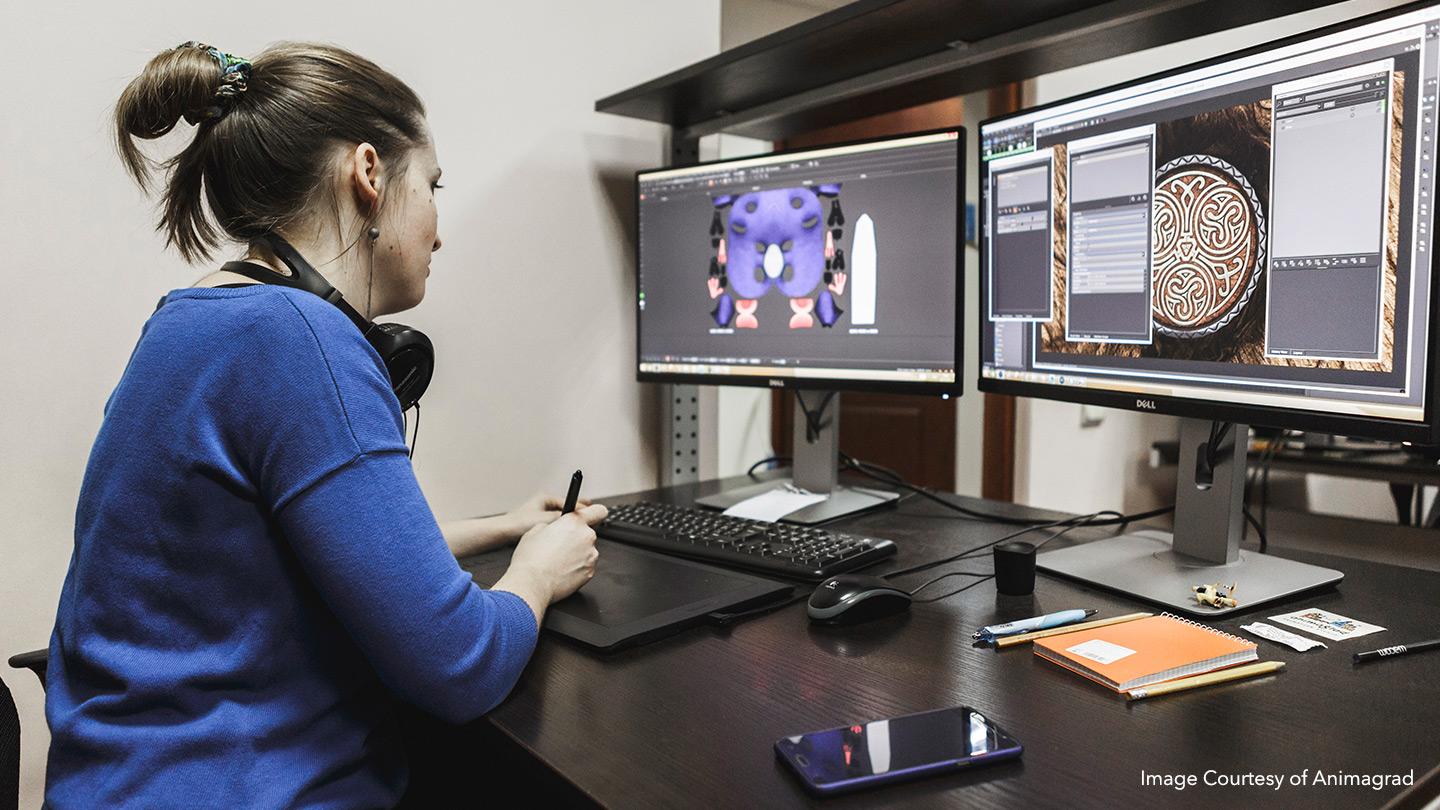 A future unshackled from technical limitations

Bringing Katana into their pipeline has opened up a whole new world for Animagrad.

It’s not just the improved performance that’s made the difference - although speed and stability certainly help (as Andrew freely admits: “comparing our previous approach to our current, Katana reduces our man hours by up to 80%!”)

More than that, it’s the infinite creative possibilities and freedoms Katana gives them. For the new project the team are working on - an animated film called Mavka - Katana has been embedded in the pipeline from the beginning.

This has unshackled them from the technical limitations they had previously experienced - now, nothing is off the table: “Before we would have to reject certain scenes or certain things from the movie - for example, a forest with X amount of trees. Our previous tool could just about handle it, but add a couple of hundred more trees, and it would crash”.

“Now with Mavka, Katana puts us on the next level in terms of the size of the sets, the complexity of the sets, how beautiful the lighting can be. We’re also starting to shade and texture through Katana straight away, so we get the look dev earlier in the process.”

“So it’s not even just that we can do things better, it’s that we can do a lot more as well - there are more creative options. It’s like a chain breaker of our creative limitations.”

“We no longer reject things because we’re technically incapable of doing them - we only reject things if we don’t like the idea.”

Want the freedom to fully explore your creative options? Get a free 30-day Katana trial.  Alternatively, contact us to arrange a demo